The prize sum is SEK 50,000. The master thesis was performed on behalf of RISE Processum, Sweden, with the aim of investigating whether wet granulation is a suitable method for increasing the granulate size of bio ash as well as whether a binder is needed in order to achieve adequate strength in granules before being used as forest fertilizer. Albin is Luleå University of Technology's first winner of this prestigious prize.

From the forest industry's solid fuel boilers as well as from municipal bio-power plants large quantities of ash contain valuable minerals, which can be used for forest fertilization. The ash can be used to upgrade biogas to vehicle gas by absorbing hydrogen sulphide and carbon dioxide from the biogas, which produces a carbonated ash. In order to practically return the carbonated ash to the forest, it is required that it is available as a granule of appropriate size.

"In my thesis I was able to show that wet granulation, with only minimal addition of bentonite, is an appropriate method for use to increase product size," says Albin Nilsson. "The leaching properties, which are important for the final ash product, were not affected by granulation, as solid calcium hydroxide bridges bind together granulate with only carbonated ash. These bonds quickly break up when in contact with water, which frees the ash particles from the granular structure." 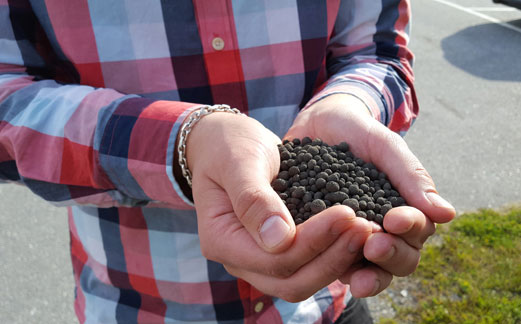 "I am extremely honoured that my work was nominated by LTU for Lilla Polhemspriset and even more so that I was the one to receive this fine award in stiff competition with other well executed master theses. It was even more fun than expected to work on this master thesis and it got more and more interesting. I did the laboratory work at LTU. Part of my work was to develop a new method for evaluation of wet granulation?as granulation method in laboratory scale, another part to build a working analysis equipment for measuring compression strength of the granulate."

"We congratulate Albin Nilsson on the excellent master thesis. The results are interesting and are an important part of our development to utilize the large amounts of ash generated in the forest industry and in bio-fired heat plants. As the ash first cleans biogas and then is turned into forest fertilizer it is of use twice", says Gunnar Westin, Business Developer at RISE Processum in Örnsköldsvik and supervisor for the master thesis.

The Lilla Polhemspriset is awarded annually by the Swedish Association of Graduate Engineers for the best master thesis at the Master's degree program or equivalent in Sweden. The prize sum is SEK 50,000 and is awarded at the Polhem party on October 19th. The nominations are made by Sweden's higher education institutions that have the opportunity to nominate two theses each.

Christopher Polhem (1661 – 1751), was a Swedish scientist, inventor and industrialist. He made significant contributions to the economic and industrial development of Sweden, particularly mining. He and his son Gabriel Polhem were both elected members of the Royal Swedish Academy of Sciences in 1739, the year the Academy was founded. (Source: Wikipedia)

SP Processum started in 2003 and has developed from a technology park in Örnsköldsvik, Sweden, to a leading biorefinery initiative, both nationally and internationally. The major parts of the activities concern support and initiatives regarding research and development in the areas biotechnology, energy technology, inorganic chemistry, organic chemistry and raw materials with a focus on sustainability. Together with other biorefinery initiatives along the coast of the northern part of Sweden, and together with the universities, form an important hub for development of new products, energy solutions and fuels based on wood raw material. SP Processum hosts the growth initiative The Biorefinery of the Future. SP Processum AB is owned 60 % by RISE Research Institutes of Sweden and 40 % by the 20 member companies forming the Processum Interest Group.
https://www.processum.se/en/