Scientists have long been captivated by the ability to make CFs and CNCs from the cellulose in trees and other biomass. CFs and CNCs have potential uses as renewable and biodegradable additives to improve the performance of  products in several industries. These include pulp and paper, medical, food, cosmetics, coating, construction, transportation and electronics industries.

Taking CFs and CNCs out of the lab and into production

The article titled, “Growing the Bioeconomy: Advances in the Development of Applications for Cellulose Filaments and Nanocrystals,” appeared in the June edition of “Industrial Biotechnology.” FPInnovations is at the forefront of CF and CNC research with scientists in laboratories in Pointe-Claire, Quebec and Vancouver, British Columbia. They are working towards improving the functionality of both materials. Advancements have taken CFs and CNCs out of the lab and into production.

“There is worldwide interest in bio-based materials, sustainability, and how they critically contribute to the bioeconomy,”  said Wadood Hamad, research manager of the Transformation and Interfaces Group based in Vancouver. He added, “FPInnovations’ R&D pioneered many developments around CNCs and filaments. And, we are now actively engaging in mapping out the best cost-performance scenarios for each material and endeavouring to find the most effective applications in terms of economic and societal impact.”

Here are highlights from the Industrial Biotechnology article:

Processing capacity and challenges of CFs and CNCs

CFs can be produced from all types of wood pulps, bleached or unbleached, using mechanical means without additional chemical or enzymatic pre-treatment. A much higher production rate can be achieved in either continuous multi-pass or batch mode because of the higher operating consistency. The process also uses existing equipment to produce mechanical pulps, thereby reducing the capital cost for commercialization, and potentially reviving pulp mills currently idle due to market decline in newsprint and other papers.

CNCs, on the other hand, are produced by chemical processes. Typically, sulfuric acid is reacted with wood pulp to optimize CNC yield. When the level-off degree of polymerization is reached, hydrolysis is terminated by rapid dilution with water, and the acid is removed by centrifugation and dialysis. Neutralization of the acidic sulphate groups with sodium allows the CNCs to be spray-dried as a powder that is easily transportable and re-dispersible in water or polar solvents. 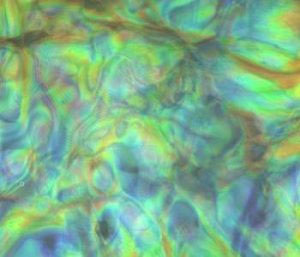 Uses of CFs and CNCs

Considering applications other than paper, packaging, and tissue, cellulose nanofilaments (CNFs) have strong potential in drug delivery. Kolakovic et al. studied the possibility of using CNFs as a tablet excipient. The results showed that CNF particles were less prone to permanent deformation. Controlled drug delivery (CDD) is a vast area of research in pharmaceutical sciences.

Zoppe et al. showed for the first time that CNCs could be used as viral inhibitors of the alphaviral infection. Their findings could potentially extend CNCs’ applicability as inhibitors of other viruses, such as human immunodeficiency virus (HIV) and herpes simplex viruses.

CNCs also uniquely possess chiral nematic organization in both liquid crystalline suspensions.  This property permits the production of uniquely coloured films without the use of pigments, which is helpful in using CNCs as a templating material for developing photonic mesoporous materials, hydrogels and polymers.

The potential for developing applications around CNCs is only limited by one’s imagination.

Please visit the Industrial Biotechnology website to read the full article. For more information on FPInnovations’ ongoing CF and CNC research, please contact This email address is being protected from spambots. You need JavaScript enabled to view it.