It is obvious that Internet has become an integral part of our daily personal and work lives and a fundamental driver of productivity. However, we take Internet connectivity and LTE networks for granted and often forget that it hadn’t entirely reached remote areas, notably the forest. Well, until now!

Why do we need Internet in the forest?

Through the Forestry 4.0 program, FPInnovations seeks to provide Internet access to harvest teams in order to improve the connectivity of forestry operations. In fact, around 60% of logging operations are not covered by a cellular connection.

Better connectivity in the forest would allow better coordination of the supply chain, improve worker safety, facilitate the exchange of data from forestry equipment and allow the introduction of advanced technology such as remote operation and automation.

In recent years, FPInnovations tested several communications technologies. The challenge remains to find a solution allowing the transfer of large volumes of data by mobile communication equipment—following the harvesting teams—at an affordable cost and which can be deployed far from any commercial communication infrastructure. 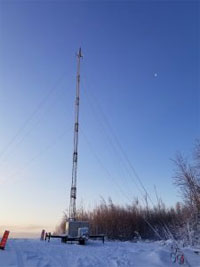 Semi-permanent 100-foot-high towerIn 2019 and in collaboration with Resolute Forest Products (RFP) and Ambra Solutions, a private cellular network (LTE technology) was put to the test in RFP’s forest operations, in the Mauricie region (Quebec). The network connects to the existing microwave telecommunications infrastructure that brings the Internet to the PFR forest camp.

This private cellular network consists of a semi-permanent 100-foot-high tower (on the right) which emits the main cellular coverage. Then, a 30-foot mobile tower can follow a harvesting team to improve coverage in each area. When the position of this mobile tower changes, a second LTE frequency band maintains the communication. This innovative technique was developed and tested by Ambra Solutions.

The signal is optimized to maximize coverage while allowing adequate bandwidth. However, the low transmission power of a cell phone is the weakest link in this network. One of the best solutions to improve this uplink is to install an amplifier in vehicles or forestry equipment where initial results indicate a considerable improvement in range.

In optimal conditions, cellular reception can be received up to 10 km from the antenna. The topography will certainly disturb the waves and limit the signal in many sectors, especially behind the mountains and in the valleys (photo below). On the other hand, when positioned within coverage, the system offers the advantages of LTE technology, being clear and prompt telephone calls. Web browsing and online video broadcasting were also successful throughout the territory covered by the LTE signal. 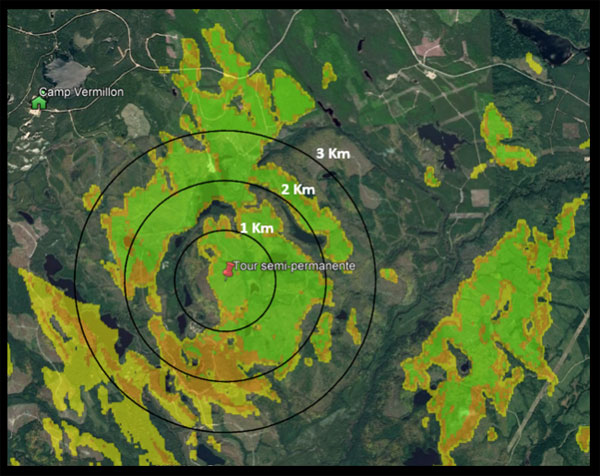 The challenge of using this technology remains coordination with forest operations (which teams will be where and when) to determine the positioning of the LTE antennas. To be profitable, cellular coverage must be optimized and their movements limited. However, forestry operations are constantly on the move and operational planning involves several stakeholders. In a permanent implementation, the sequence in which the harvesting blocks will be harvested must be known in the medium term, since the deployment of the LTE network will depend on this sequence. In addition, the positioning of LTE antennas is essential to maximize coverage. Indeed, they must be high up, which requires access paths as well as a clear surface to anchor the tower.

LTE technology is very promising and offers great potential for improving connectivity in the forest. However, this technology will not be applicable to all operations in countries given the complexity of a permanent deployment and the limitations caused by the topography. FPInnovations continues to investigate other solutions to bring connectivity to the forest industry, in particular through constellations of Earth-orbiting satellites.

To learn more on the Forestry 4.0 program, please contact This email address is being protected from spambots. You need JavaScript enabled to view it..