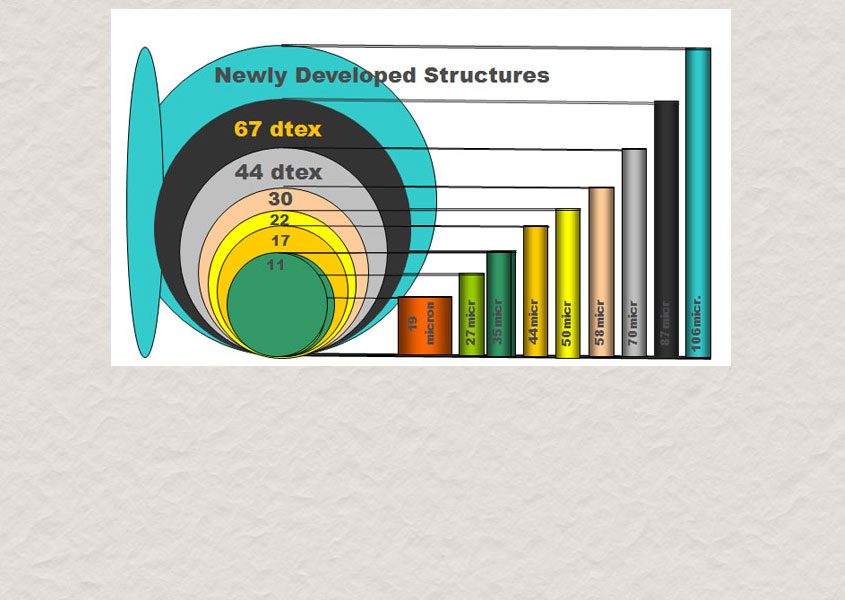 During the introduction of Batt on Mesh (BOM) felts in the early 70's, it was shown that the inclusion of an incompressible component into the base enabled handling of higher water loads and providing longer life because of their inherent resistance to compaction and filling.

The older Batt on Base (BOB) structures were known at the time to provide better water removal performance because of their better in-nip pressure uniformity, but the advantages of longer life, resistance to crushing at higher press loads, and better cleanability outweighed this consideration, particularly in an age of cheap energy.

In recent times, however, Cristini engineers have determined a methodology by which the water removal advantages of the more compressible structures with their enhanced pressure uniformity, can be achieved without sacrificing any high-water-load and life properties of the recent past "state of the art" laminated structures. In fact, these properties are improved. This family of Prexx felt structures utilizes layers of large diameter, nonwoven structures over the incompressible base fabric, instead of a single layered woven structure which has been shown to impart significant non-uniformity to the sheet while in-nip.

Real life case studies in which the only change induced to various press configurations, is the inclusion of this family of more compressible press fabrics, and press solids are increased measurably and substantially. Two of the basic principles of water removal, pressure uniformity and felt compressibility, are maximized by these new types of structures. It can be demonstrated that by moving away from the current "state of the art" laminated structures, water removal is enhanced.

Although the ultimate proof is on the paper machine, lab data shows clearly that, by inserting a layer of the new nonwoven material over the base fabric, pressure uniformity delivered to the sheet is greatly enhanced, when compared to standard laminated felts which use an additional single layered fabric for this purpose. The "bridging" over non-uniform knuckle structures in the base is maximized by these structures, while laminated structures still impart a measurably non-uniform surface under pressure. These differences are proven by lab data.

Non-uniform pressure application in the nip induces water to move laterally within the sheet, vs. vertically down into the felt, thereby reducing pressing efficiency. Computerized Tomography (CT) Scans clearly demonstrate this effect. Many, small, areas of pressure are much more effective in removing water than fewer pressure points, larger in size and magnitude of pressure. Additional lab data showing the compression characteristics and resiliency of various material types, explain additional water removal gains by reducing the area of "rewet" on the exit side of the nip. The faster the felt rebounds, the more effectively it competes for boundary layer water. Paper machine case studies are used to back up these laboratory findings with record setting performances.

From the time that the era of modern felts began in the early 70's, felt designers have faced the dilemma of balancing the pressing uniformity of the structure vs. the void volume of the materials used to fabricate the pressing media. Typically, those materials used to produce a uniform pressing medium involve small diameter batt fibers, small diameter yarns, compressible materials, and 2 dimensional, or planar components. Conversely, void volume is built into press fabrics by using large diameter batting and yarns, and hard incompressible yarns which are woven into open structures with relatively large interlacings which serve to create void volume while the fabric is under compressive forces.

The disparity between these materials has forced designers to characterize nips into discrete categories which effectively ignore the advantages of both properties, ie, pressure uniformity and void volume, and focusing on one or the other. It is known, however, that, all things being equal, a nip requiring high void volume would also benefit from improved pressure uniformity while the converse is also true.
Herein is proposed a novel solution to the conundrum. A newly engineered component, when included into classical felt structures, has shown the ability to provide superior pressure uniformity, while simultaneously retaining high levels of void volume within the nip. The result is to achieve the higher water removal rates associated with improved levels of pressure uniformity, without the issues of low fabric life or crushing related to insufficient void volume.

DIFFERENCES FROM PRIOR ART

Modern felts have, for the last 40 years, been made of synthetic batt fibers needle punched into a base fabric made of yarns of varying hardness, from monofilament to strands of tightly bundled small (usually 17 dtex and larger) filaments. The batt fibers are crimped in a 2-dimensional zigzag pattern to impart some bulk for a limited degree of density control and processibility in felt manufacturing. The included figure shows varying degrees of fiber fineness that have historically been used for batt making, along with the new fibers utilized in felt manufacture.

The first obvious difference is the diameter itself. This new product utilizes 106, even up to 120 micron fibers. The bending stiffness of a cylinder is directly proportional to its length, but to the 4th power of its diameter. This diameter puts them into a range that is significantly larger than batt fibers, yet smaller than the yarns that are used to make base fabrics. These fibers are also thermally crimped, not in 2 dimensions like normal batting, but in 3 dimensions to create a spring-like non-woven structure which can then be used as a layer within the felt, thereby replacing a woven layer typically used in laminated felt structures. The 3d crimp and the high bending moment of the fibers effectively bridges the knuckles and other non-uniformities of the underlying woven base, while still providing the void volume necessary for some high-water load positions. There is then the added benefit that the structure is more resilient because of its rapid rebound when released from nip pressure, effectively reducing rewet on the exit side of the nip. The increased pressure uniformity, combined with a more resilient structure, will significantly improve water removal performance on most applications.

Comparison of Fiber Sizes Used in Batt and Non-Woven Bases 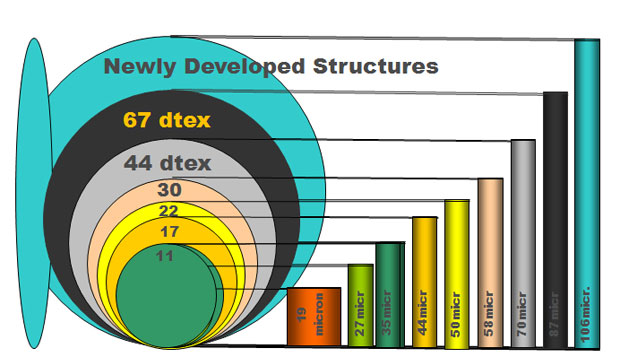 Figure 1. Shows the relative sizes of batt fibers in current use, up to 44 dtex. Beyond that diameter, 2 dimensionally crimped batt fibers are replaced with thicker fibers, crimped in 3 directions, and then formed into a non-woven matt to be inserted between the traditional batt structure and the base fabric. Because of the inherent resistance to being compacted and the lack of knuckles or the presence of relatively larger diameter monofilament yarns, the surface presented to the sheet under nip pressure is extremely uniform (inducing the downward, vs. lateral flow of water) thereby improving water removal performance and, in many cases, improved sheet smoothness.

Classical water removal theory divides the nip into 4 discrete zones as is shown in figure 2. The total pressure seen by the sheet in the nip is composed of the sum of the shaded curve (the hydraulic or water flow portion) and the diagonally striped curve (the resistance of the fibers themselves to being compressed). In the different presses and across the different papers being made, the magnitude of each of these two factors change. The consistency of the sheet, the weight of the sheet, the level of refining, the temperature of the sheet, the amount of fillers, the hardness of the press rolls, and the length of the press nip are all factors that come into play when characterizing nips as either pressure or flow controlled.

The Standard Schematic of Pressures within the Press Nip 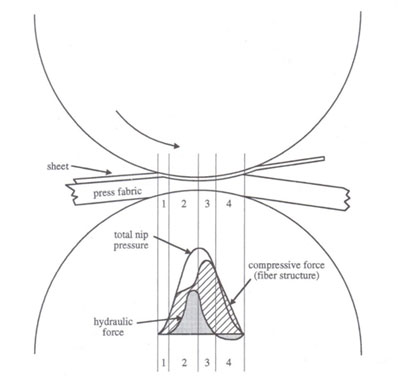 Figure 2 is the classic portrayal of the 4 phases of the press nip, highlighting the hydraulic (flow) portion as shaded, and the compressive (mechanical pressure) portion as diagonally striped. (1.)

Figure 3 shows that we can now engineer the amount of void volume in-nip vs. out-of-nip for nip dewatering, if desired.

It is now possible to show a single felt design matrix, as opposed to two separate matrices, as is show in figure 4. By varying the mass and fiber diameter of the 3d non-woven composite, felts for virtually all applications can be made in the same manner. The substitution of the engineered layer in place of a woven fabric, typically used in laminated structures, provides the specifically needed void volume without disrupting the pressure uniformity of the felt under high pressures. 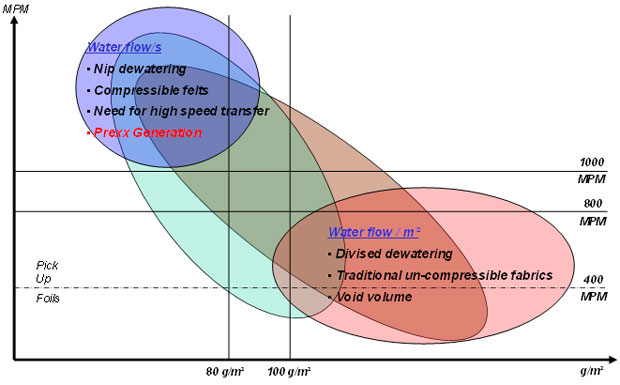 Figure 4 illustrates that traditional felts had to be constructed one of two ways (upper right circle, lower left oval). The new structures being discussed now can function in both quadrants, imparting the best properties of each.

In Figure 5 it can be shown how felts for essentially all applications can be made by inserting the 3d non-woven structure between base fabric of various types and the batt required for achieving the target permeability and surface characteristics.

The Concept Can be applied to All Standard Base Fabric Types 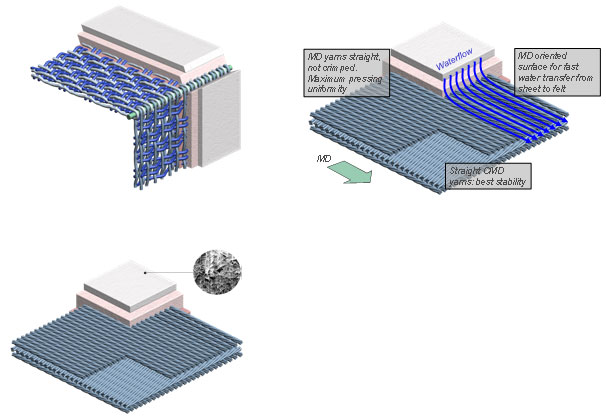 Figure 5 demonstrates that virtually all types of base structures can be enhanced and refined by combination with the 3d non-woven substrate (show in pink), which would normally require the introduction of an incompressible woven structure instead. 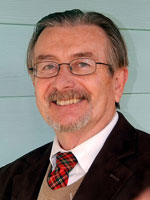