The installation of a new turbine generator isn't expected to just generate new revenue for Domtar's Windsor, QC facility, it will also produce18 MW of electricity, optimize the mill's steam, all the while ensuring operational flexibility.

The sheer scale of the papermaking giant's operation is a force to be reckoned with. The facility processes 1.7 million cubic metres of wood each year, 80% of which comes from roundwood, the residual from wood chips. It goes without saying that with this much wood, comes an enormous amount of bark – nearly 50,000 tons of it, confirmed Eric Lapointe, forest operations coordinator for Domtar. And so it only makes sense the company is looking for a way to create value from the leftover material after its logging operations are done.

"There is a lot of biomass available in Quebec, but it often ends up in landfills," noted Michel Lemieux, Director of Health and Safety, Environment and Strategic Investments for Domtar. For many years, large quantities of bark were also redirected to landfills, to be buried alongside biosolids.

But that was before Domtar made a major shift towards what has become known as the 'circular economy,' where waste, as a concept, hardly exists anymore, because all material has some intrinsic value in the production chain or can be used by a partner. In other words, waste, is a resource.

It was this mindset that saw Domtar take the strategic decision to use its biosolid waste as fertilizer for its hybrid poplar plantations. To support its endeavor to create value from bark and residual biomass, Domtar Windsor joined Hydro-Québec's forest biomass-based electricity generation program. The basics of the plan are fairly straightforward: add an 18 MW turbine generator to the existing 32 MW turbine. "This program allows us to reduce our costs by delivering energy to Hydro-Québec at a competitive rate," explained Lemieux. "And that's not all. The new turbine-generator installation also allows us to optimize the steam in the mill. Instead of passing through a pressure-reducing valve, the steam is passed through the turbine. The steam at 4200 kPa is transformed into electrical energy. After generating energy, the steam pressure is reduced and it is redirected to different locations in the plant where pressures of 1800, 800 or 400 kPa are needed." 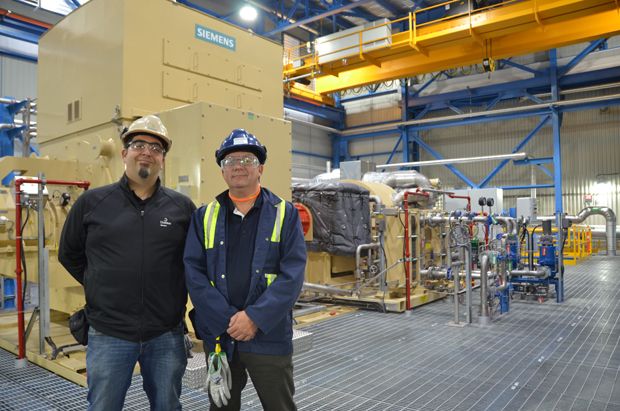 Despite the plan's ultimate success, there were hurdles to overcome. The facility's processes required integration, which was a major challenge, noted Vincent Pomerleau, the project's engineer. The water distribution network had to be optimized in order to produce a maximum amount of energy per ton of burnt biomass. Pomerleau's team also established an innovative process to recover condensed vapour energy before sending it through the mill. "We must ensure that the energy loop and the water consumption of the mill are not disrupted, despite the consumption variations we have through the year," Lemieux explained.

Time was a factor as well. Under the parametres of the program, the installation had to be complete by November 1, 2017 – otherwise the company could face penalties. "Even though we started the project a little late, on June 6, 2016, we were able to manage the different teams' overlap to deliver the project on time," Pomerleau confirmed, with a sense of pride. Pomerleau managed the project's internal team of 15 people, and several subcontractors. "Our team proved once again that they can deliver big projects in-house, which helps us maintain the executive's confidence," added Lemieux.

The Siemens Industrial steam turbine (type SST-300) works in synch with the first 32 MW installed by the company in 2001. Unlike the first turbine, which supplies steam to the process in order to generate energy, the new one can produce electricity by condensing steam. "It gives us good operational flexibility," Lemieux said of the new turbine. "And it's also interesting for Hydro-Québec because we will be able to deliver electricity at all times, even if we have a breakdown in the steam system. "

The new turbine will enable the Windsor mill to produce 50 MW of during peak periods - not bad for a facility that consumes 82 MW. Nearly 30,000 tons of additional biomass from Domtar and its suppliers will have to be shipped to the plant to meet the turbine's needs. The project cost Domtar $36 million.

The SST-300 is an optimal solution for a wide range of applications due to the implementation of the best technology combined with over 20 years of experience. In the last decade alone, this turbine has been installed in over 500 industrial and power applications by customers all over the world.

The flexible configuration of the SST-300 enables it to be used in diverse applications such as waste-to energy, chemical processing, pulp and paper, cement and many more. 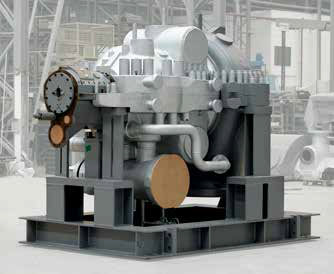 SST-300 turbines are delivered as packaged units. The components of the turboset are installed on a common base frame, including the complete oil system. The number of external connections is reduced to the minimun and all connections (piping, wiring, etc.) are clearly defined accoriding to standards such as ASME and DIN. This reduces the time frame for commissioning extraordinarily.

The SST-300 baseframe packaged unit can either be placed on a simple ground-level concrete block foundation or on an elevated foundation. The "plug and play" system reduces site construction time and does not require personnel with advanced skills.

All components and auxiliaries including the lube oil system are mounted on a common base frame. The turbine can be configured with either an upward, downward or axial exhaust orientation depending on the layout of the plant. The turbine can also accommodate multiple extraction / steam induction points as well. The compact design and simple layout of the turbine significantly reduces cost and time associated with its construction, inspection and maintenance. 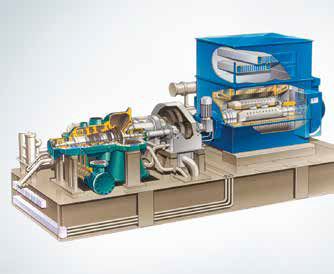 Uncontrolled extractions (up to 6):

All data are approximate and project related. 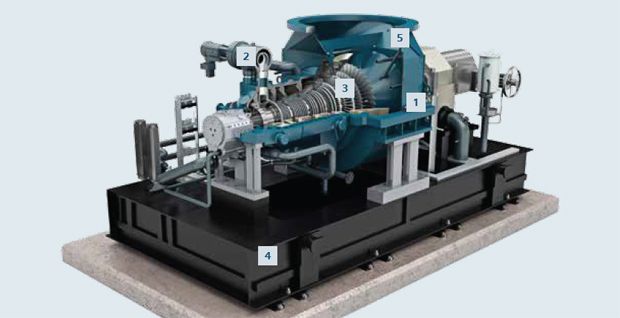 Typical applications for the SST-300 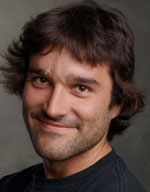