Yes, plastic litter (any litter for that matter) and marine pollution is terrible, and we need to have a long hard look at our consumption habits and to reduce our use of fossil fuels.

But when we are warned by the United Nations’ Intergovernmental Panel on Climate Change that we have only 12 years for global warming to be kept to a maximum of 1.5 C, our prime focus should surely be on achieving some “big hits” that will rapidly reduce current greenhouse gas (GHG) emissions.

In waste management terms, those “big hits” are reducing the methane being emitted from landfills; and getting more paper and organics out of them. In landfill, paper and organics emit carbon dioxide and methane. Reducing methane and other GHG, and their causes, should be our prime focus, not publicly announcing vague aspirational goals for plastics somehow getting to 100% this or that, with no penalties if they don’t get there. Excuse the cynicism but we’ve seen this movie before.

Where the focus should be

Focus number one should be capping methane emissions from landfill. These efforts are underway but need to be accelerated.

Focus number two should be addressing the material streams in landfill that emit GHG: organics and paper. Both are sizable chunks of Canada’s waste stream. And here’s the good news. They already represent two-thirds of what Canadians divert from landfill. Let’s build on this foundation.

Many provinces and cities now have active “green bin” organics recovery programs. And the national diversion of organics has climbed steadily in recent years (up 11% since 2008 to 2.6 million tonnes).

The leader in this effort has been Nova Scotia, which banned organics from landfill way back in 1996. Nova Scotians diverted 170 kilograms of organics per person in 2016; almost six times more than their provincial cousins in Saskatchewan. If we assume that Canadians consume organics in much the same way across the country, how come Saskatchewan and Quebec are so far behind? Is it geography, population density, rural/urban mix, lack of infrastructure, attitude, government priorities, leadership? All good questions.

And here’s the missed opportunity. If we applied Nova Scotia’s organics recovery numbers to the whole country, we could have expected 3.36 million more tonnes of organics diversion in 2016. That would have raised Canada’s overall waste diversion rate by 6.5% and eliminated some 638,000 tonnes of GHG. While there are new costs in adding organics programs these are somewhat offset by saving millions of dollars in avoided landfill costs and by tax revenues flowing to governments from new jobs in organics processing.
Paper

It’s a similar story with paper, the most widely recovered material in Canada. The leaders in paper recovery in 2016 were Quebec and British Columbia (136 and 130 kilograms per person respectively). Manitoba and Saskatchewan lagged far behind, at 47 and 41 kilograms per capita.

Let’s assume that paper consumption was similar across the country. If we applied Quebec’s 136 kilograms per capita rate to the rest of Canada this would have meant an extra 1.21 million tonnes of paper diversion; would have lifted Canada’s overall waste diversion rate by 2.5%; and would have eliminated some 145,000 tonnes of GHG. It would also have given longer life to existing landfills, something that seems to be getting more and more attention from governments this year.

Add these two major streams together (paper and organics) and you have close to 800,000 tonnes of GHG reduction from Canadian landfills while boosting Canada’s overall waste diversion rate by almost nine per cent. Aren’t these targets worth setting? And we’re not even addressing other waste streams that could and should be included.

So, how do we get more organics and paper out of landfill? Disposal bans or generator levies. Only two provinces have them: Nova Scotia (which coincidentally has the lowest waste disposal rate in Canada) and Prince Edward Island. Metro Vancouver has shown it can be done with benefits in an urban area. 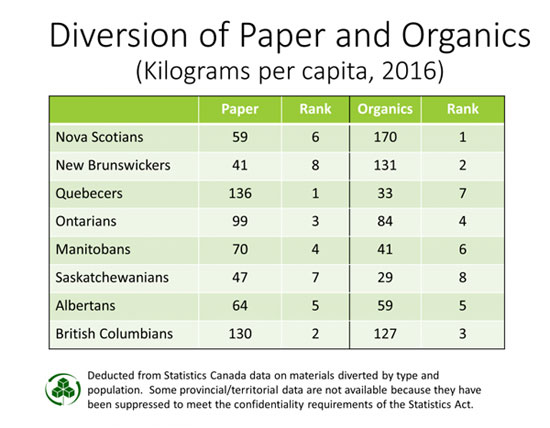 PPEC, representing the paper packaging industry, has lobbied various provincial governments to ban old corrugated boxes from landfill since 2015. We have seen three different ministers of the environment in Ontario on this issue over the years but there has been no action to date, just statements that “we will consider it.” 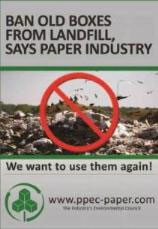 We estimated back then that a ban on the disposal of old corrugated boxes in Ontario landfills would reduce methane and carbon dioxide emissions by up to 175,000 tonnes a year (equivalent to taking 33,000 cars off the road or eliminating the annual energy emissions of 70,000 homes).

These used boxes shouldn’t be in landfill. Every single packaging mill in the province uses old corrugated collected from the back of factories, supermarkets, office buildings or from curbside to make new packaging, most of it 100% recycled content. We import similar used boxes from the US when we can’t get enough in Canada. It’s our feedstock. We need it.

In summary: the key to reducing GHG emissions from the waste management sector lies in provincial landfill policy:

Yes, it’s not easy, but it’s doable. And don’t get me started on the BS that recycling is dead!