Most Canadians find it hard to believe that the forest industry is accountable for only 4% of Canada’s deforestation. And that Canada has one of the lowest deforestation rates in the world (0.01%).

The widespread public confusion springs partly from the definition of the word itself in international agreements. Chopping down a tree or a section of forest, for example, does not equal deforestation when its harvest is followed by the regrowth of that forest.

In Canadian law, logging companies must replenish or restock the resource they have harvested either through natural or artificial regeneration (tree planting and seeding). Because they do this, replacing the forest they have harvested earlier, the net deforestation they are responsible for, is minimal. In fact, the 4% represents the new permanent access roads that the industry needs to get into the harvest areas, rather than the harvest itself.

The 4% is not a guess. It is generated by a very sophisticated National Deforestation Monitoring System (NDMS) set up by Natural Resources Canada and the Canadian Forest Service that employs aerial photography and satellites in the sky (remote sensing) and direct, on-the-ground personal observations by qualified forest scientists. Its findings on deforestation are published every year in a report on the State of Canada’s Forests to the federal government.

So, let’s get to the false claims. Toronto-based environmental group, the Wildlands League, recently claimed that the annual deforestation caused by the Ontario forest industry was more than seven times higher than the reported rate of forestry-incurred deforestation in Canada as a whole.

It based this claim on a study of what are called “landing areas” in 27 sites in northwestern Ontario, extrapolating its findings to the rest of the province. What are landing areas? Basically, they are smallish areas where full trees are sometimes dragged from the stump to the roadside so that merchantable logs can be separated from waste wood. This harvest residue is then burned or just left to rot, says the league. The soil becomes compacted over time, and little new regeneration of forest takes place.

From a statistical and accuracy point of view, extrapolating estimates from 27 study sites in one region to the total harvest area of Ontario is problematic. Most of these study sites were harvested using “full-tree” harvesting two or even three decades ago, and it is uncertain to what extent those logging methods are still applied today. And not all harvested areas in Ontario are forests that have never been harvested before. The forest losses claimed in the study, then, should not be extrapolated to the whole of Ontario, and especially not to those areas that already have an existing road network.

It is true, however, that many of these landing areas in Ontario are not in great shape, as the league points out. Current estimates for carbon emissions and removals from the atmosphere do not adequately represent this.

But the key issue about the landing areas is that they are not included in deforestation estimates, as much as the league would like them to be.The landing areas are still on forest land. They have not been converted to non-forest purposes such as agriculture, oil and gas projects, hydro reservoirs, mining extraction,  residential subdivisions, ski hills or golf courses.

This definition of deforestation (conversion of forest land to non-forest land) is not made up by Canada. It is broadly accepted by the United Nations and other international institutions such as the Food and Agriculture Organization, and applies equally to land converted the other way: from non-forest land to forest land (afforestation). Any change “events” that are less than one hectare in size (including landings) are excluded under these definitions. A few smaller European countries have chosen to adopt smaller minimal areas (0.5 hectare) but this level of detail is not economically or practically feasible in a country the size of Canada.

The league may very well want to change international definitions of deforestation (good luck with that one!) but its real target is the failure to regenerate the forest that the landing areas are in. And that is squarely the responsibility of individual provinces. They should be enforcing the regeneration requirements of the forest licences they have granted on provincial (crown) land.

Successful regeneration of forest is clearly very important, but promoting a false definition of deforestation (an emotive word at the best of times) just adds to public confusion. Worse, it distracts attention from doing something about the main causes of deforestation in Canada (the conversion of forest land to agriculture, oil and gas development, new hydro lines and reservoir flooding, mining minerals and peat, and municipal urban development).

Now for the sloppy journalism part. The Wildlands League took its study to the Globe and Mail newspaper which then put together a front-page lead and an extensive two-page feature inside with appropriate charts and photographs. The study disagrees with the definition of deforestation used by the NDMS and is critical of the Ontario Ministry of Natural Resources and Forestry (MNRF) for its lack of action on landing sites. 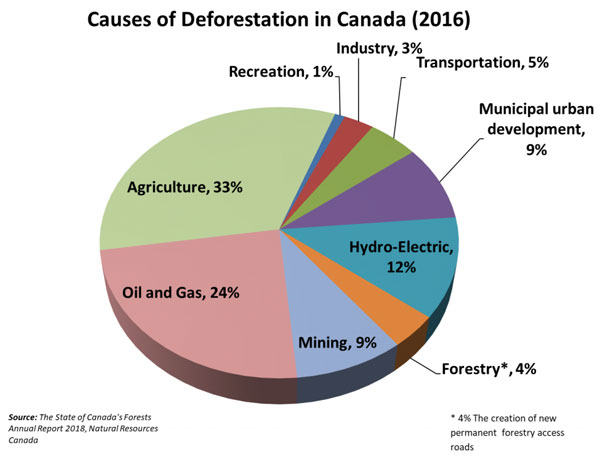 But according to staff at the Canadian Forest Service, Globe reporter, Ivan Semeniuk, never interviewed anybody representing the NDMS prior to publication. Nor is there any indication in the article itself that the Ontario ministry was contacted either. No one from the Ontario MNRF is quoted in the article. But the Wildlands League and another environmental group, the US-based Natural Resources Defense Council, were interviewed. And both are quoted in the text.

So here we have a major feature on “deforestation” and forest regeneration in this country, and the reporter doesn’t go to the people most closely responsible for tracking and dealing with these issues. Is this balanced reporting? Looking at all sides of an issue? Gotcha journalism?

There were also obvious clues of potential bias in the study document. Some of the field expenses for the study were paid for by an outspoken critic of Canada’s forest industry (the Natural Resources Defense Council) and here’s a surprise, the Cement Association of Canada. What’s cement got to do with forestry issues? It just happens that the Cement Association is lobbying against the greater use of engineered wood, a substitute for more emissions-intensive cement products in the building sector. Hmmn.

And then there’s this piece: “The findings are particularly troubling because much of Canada’s old-growth forest continues to be harvested for single-use, throw away products such as tissues, or for pulp – products for which alternative sources exist.”  This is an interesting claim in itself but it’s got nothing to do with regenerating landing areas. Nothing. The landing areas would exist whatever the product of the forest. Whether it’s the lumber used to build the reporter’s home, his office, his children’s school, the local hospital, or the pulp used to make printing and writing paper and tissue.

If the Globe wants to be serious about deforestation in Canada it should focus on the main cause (the conversion of forest land to agriculture). Farmers are good people, providing us with local food, scratching to make a living. But they also happen to be, as a group, the largest body of people removing Canadian forest for good. Eight times more, in fact, than the frequently vilified forest and paper industries.

And since Semeniuk is a “science” writer, how about informing Canadians about some of the really exciting things going on today with forest products: addressing climate change through taller mass-timber buildings; new uses for lignin; nanocrystalline cellulose; cellulose filaments; bio-composites.

So, there you have it. False claims. Sloppy journalism. And a confused public as a result. The only good that’s come out of this story is that it has focused more attention on the state of those landing areas. Why not create jobs by getting them cleaned up? Plant some of Justin Trudeau’s two billion trees there. Get something done, and soon.

P.S. I will be speaking on the subject of Deforestation in Canada and Other Fake News (the title of my recent book) at the Environment Session of Canada’s Annual Paper Week in Montreal on 4 February.