There’s no question that deforestation is a serious global issue with climate change consequences. The massive fires in the Amazon and Indonesia are just the most recent examples.

But there’s also a lot of misinformation about deforestation, about where it’s occurring, and what its major causes are.

For starters, simply cutting down a tree is not deforestation, according to United Nations’ definitions. Removing trees or forests and replacing them with something else, on the other hand, is. Think of the conversion of forest land to agriculture, oil and gas projects, new homes, hydro lines or reservoirs, ski hills and golf courses. In other words, deforestation means the forest is unlikely to return to forest. It’s gone for good.

That’s not to say that the world’s forests are not temporarily disturbed by both natural and human interaction. Insect infestations, disease, and forest fires occur naturally and have done so for thousands of years. There is no such thing as a pristine undisturbed forest. Human interaction (for example, logging) also disturbs the forest, but in Canada’s case, provincial law requires that the forest be successfully regenerated either naturally or by artificial means (planting and seeding). Over a thousand new seedlings are planted every minute in Canada to help regenerate what has been harvested earlier.

The fact that this occurs in Canada helps explain why the forest industry here was responsible for only 4% of Canada’s total deforestation in 2016. The 4% is the forest land removed to create new permanent forestry access roads. 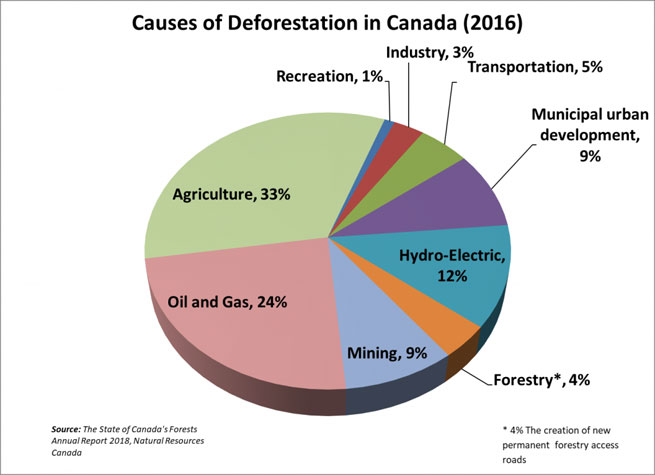 {If you would like to know more about deforestation can I modestly suggest that you read my book! (Deforestation in Canada and Other Fake News at www.johnmullinder.ca). It covers Canada’s deforestation rate, its history, its causes, and how Canada compares to other countries. It also outlines the basic facts about forestry in Canada and tackles ‘Other Fake News’: several false and misleading environmental claims, sloppy media and greenwash}.