Municipal politicians love to point to “industry” as the main contributor to Canada’s waste stream. And while it’s true that most garbage today does come from industrial sources, there are clear signs that more and more garbage is being dumped by householders.

The gap between the two sources is narrowing.

A PPEC analysis of Statistics Canada data from 2008 to 2016 shows residential sources of waste tonnages climbing by 9% over the period while at the same time non-residential (industrial) sources of waste fell by 11 per cent. The waste we’re talking about here is paper, plastic, glass, metals, textiles, organics (food scraps), electronics, white goods such as fridges and appliances, and construction, renovation and demolition materials like wood, drywall, doors, windows and wiring.

The demographics and urban/rural split in each province and the strength of its industrial infrastructure obviously play a role in each province’s waste disposal history and performance. But by 2016, the residential share of the overall Canadian waste stream defined by Statistics Canada had increased in all but two provinces. In Quebec it jumped from 46.4% to 56.2% or 9.8 percentage points. Alberta registered a 7% increase in residential share of the waste disposed over the period.

At the same time as the residential share of the overall garbage stream climbed in most provinces, “industry’s” share obviously fell, in six of the eight provinces where data are supplied. Data for Newfoundland and Labrador, Prince Edward Island, Yukon, Northwest Territories and Nunavut are suppressed to meet the confidentiality requirements of the Statistics Act. The biggest falls in industrial share of the waste stream occurred in Quebec, Alberta, Saskatchewan and Ontario. 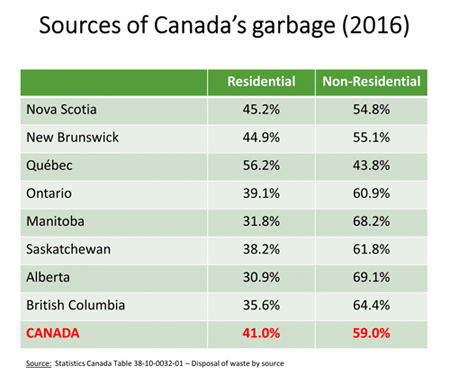 Food for thought as we design strategies to reduce Canada’s waste pile. Next: what materials are being diverted from Canada’s waste stream? And just how well or poorly are we doing?