Domtar's announcement of a new fibre-enhancing process at its Dryden, ON mill plus other recent developments in Canada portend a new age of cellulose fibre applications

The age of Canadian-made superfibres seems to be upon us. In the summer of 2014 Kruger started bulk bag shipments from the 5 t/d cellulose filament process at the Trois Rivières, Québec mill. Those FiloCell filaments developed by FPInnovations are now being used as strength reinforcements in two production papermaking processes. Earlier this summer, Domtar announced that it will develop and commercialize a portfolio of new, premium-value grades of northern bleached softwood kraft (NBSK) pulp with superior bonding potential at its Dryden, Ontario mill. This will be the first commercial manufacture of Domtar's modified fibre based on softwood pulp and the first time that cost-effective, high-performance blends of modified fibre and NBSK are commercially produced. The Domtar-developed process will be introduced in its existing production process in 2016. Naturally, the technology of the process is closely guarded.

Financial support for this project comes from Natural Resources Canada's (NRCan) Investments in the Forest Industry Transformation (IFIT) program. This program is designed to support the transformation of Canada's forest sector in becoming more economically competitive and environmentally sustainable. IFIT matched the company's expenditure with a $2-million grant to bring the technology from small-scale laboratory testing to large-scale manufacturing. "Assuming our work to date translates to the full commercial scale in the project planned at the Dryden mill, and then our expectation is that the new grades of softwood pulp will have improved strength properties. It becomes kind of a flexible product. You can adjust some of the strength properties, fine tune it, if you will," explained Domtar spokesperson Bonny Skene in the www.tbnewswatch.com online news service.

The improved bonding strength properties are indeed very significant. According to an NRCan press release, this new process could result in up to a 50-percent increase in the fibre-bonding properties compared with conventional NBSK grades. A strength-enhancing fiber blend could be used in printing, writing and specialty-grade papers, tissues and paper towels, as well as in non-traditional, growing and value-added markets, including cement and fibre reinforced polymers (FRP). These new fibre applications show particular promise in market potential.

The vast majority of FRPs use glass fibres, which could be displaced by cellulose as an environmentally friendly alternative. The Joint Research Commission (JRC) of the European Union estimated that the 2011 worldwide market for reinforced composite materials of all types was about 5.9 million tonnes per year. As a component of that total production about 2.6 million tonnes per year of fibreglass are used. The study estimates that at an average fibreglass price of 1.8 Euros/kg (2600 CAD/tonne) the total market value is over 4.7 billion Euros (6.8 billion CAD). That could be a cellulose fiber industry target for substitution and a sizeable market worth pursuing. An aggressive 50% market penetration would be about the size of a very large single fibre line or more than four 1,000 t/d mills. Even more important, the premium market value per ton will be very enticing for pulp fibre producers. Small exploratory steps are happening today. 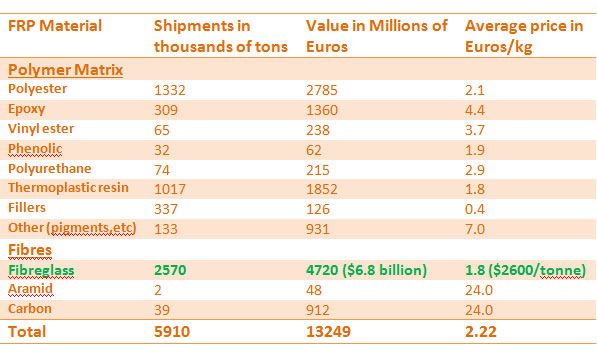 The global market for fiberglass replacement in FRP composites could be up to 4.7 billion Euros (6.8 billion CAD)/y based on 2011 statistics. Source: The Joint Research Commission (JRC) of the European Union
Massive scale of cement

On a more massive scale, the yearly worldwide production of cement is over 4 billion tonnes as estimated by the Portland Cement Association. The vast majority of that has been used to build China's infrastructure. Even a small amount of cellulose fibre derivative in a cement formulation could mean a high volume market. One percent is 40 million t/y of fibre.

The potential non-traditional markets of cement and FRP are attractive, but they are also targets for a number of cellulose fibre-derived products. For instance, Resolute Forest Products and Mercer International are already targeting composite product applications, among others, with their Performance BioFilaments joint venture. Weyerhaeuser is also marketing their Thrive fibre products for composite materials. Magna International is testing fibres from Canadian mills for compounding in FRP-competitive products used in their automobile parts. That is a different approach since the fibers used are as they come from pulp mills without any additional processing within the pulp mill. The value-added processing is done by Magna in their manufacturing process. There are European entrants in the market as well, like UPM's Formi products. In short, it's competitive.

For cement applications it seems that there are different approaches to cellulose fiber processing and applications as well. Researchers at Purdue University's Lyles School of Civil Engineering in West Lafayette, Indiana have discovered that cellulose nanocrystals increase the hydration of the concrete mixture, allowing more of it to cure and potentially altering the structure of concrete and strengthening it. In contrast, Domtar's product that could have applications in cement is described as a modified NBSK fibre. Also, specialty dissolving grade cellulose already has a foothold in the concrete mix market. It's all very early in the market development, so it appears that there may indeed be several roads that lead to Rome.

The Portland Cement Association estimates the 2015 world cement consumption at over 4 billon tonnes. China uses the most cement in the world by a wide margin.
Value-added, large volumes

As the viability of Domtar's fiber-enhancing process is tested next year in a production environment it seems like it has a few inherent advantages going for it. First, the value is added within the pulp mill, thus bolstering its profitability. Considering the announced initial investment for the demonstration plant it seems that the capital costs are modest. That's a plus since other recent demonstration plants have required a much bigger investment. The potential as an enhanced reinforcing pulp in papermaking is promising, perhaps leading to stronger or lighter weight products. Finally, the potential volume for non-traditional markets is large, and producing large volumes of fibre is what pulp mills are good at.