Fourteen paper mill trials and two pulp mill trials have been conducted for the game-changing FiloCell™ reinforcing agent now being produced at a Kruger demonstration plant in Trois-Rivières, Québec. Its sheet strengthening power has been confirmed. 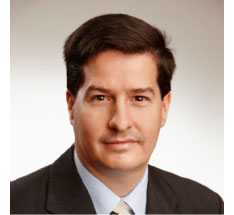 Balázs Tolnai, Manager of Technology for Kruger's Industrial Products Division.Attendees at Paperweek 2015 were eagerly awaiting news of the new cellulose filament (CF) demonstration plant at Kruger's Trois-Rivières, Québec mill. In a keynote address, Balázs Tolnai, General Manager of Technology for Kruger Inc.'s Industrial Products Division, did not disappoint as he gave the industry a positive update on the startup and application development of CF, a unique cellulosic biomaterial produced by the 5 t/d demonstration plant supported by a $ 43.1 million project. The trade name for the product is FiloCell.

The laboratory scale development, led by Xujun Hua at FPInnovations, showed promising potential which led to a strategic alliance between Kruger Biomaterials Inc. and FPInnovations in September 2013. The project received financial support from Natural Resources Canada, through the Investments in Forest Industry Transformation (IFIT) Program, the Québec Ministry of Forests, Wildlife and Parks, Investissement Québec, the Government of British Columbia, Kruger Inc. and FPInnovations' Pulp, Paper and Bioproducts industry members.

After the announcement of the plant's construction in December 2013, CF production began six months later, in June 2014, which was quite a remarkable fast track accomplishment! The first truckload was available for shipment in special bulk bags by July and the production target of 5 t/d was reached by the end of the first quarter of 2015.

Now that the plant is up and running, Kruger and FPInnovations are optimizing operations and working on CF application development, both in the pulp and paper sector and in non-traditional sectors that include composites, thermosets, thermoplastics, coatings, packaging, panels for construction and automotive applications. Mr. Tolnai described the advantages of FiloCell in papermaking: "Thanks to its high specific surface area, CF has a very high strengthening capability. It could also allow for significant lightweighting," he explained.

The product also has applications in tissue-making. Tolnai continued: "In tissue and towel applications, CF can be used to obtain special properties through furnish and process optimization."

How are cellulose filaments obtained? According to FPInnovations, the chemical and enzyme-free mechanical process gently peels filaments from fibers and preserves their original length. The CF process produces filaments with a high length-to-width aspect ratio of up to 1,000. These long, flexible filaments have a high surface area for good bonding in the paper sheet. 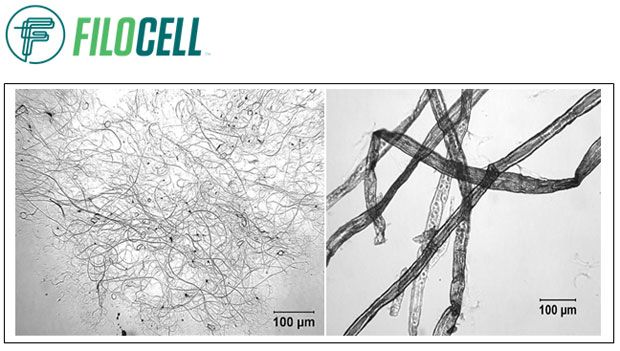 FiloCell cellulose filaments on the left are peeled from kraft pulp fibers. The filaments have a high aspect ratio, up 1,000 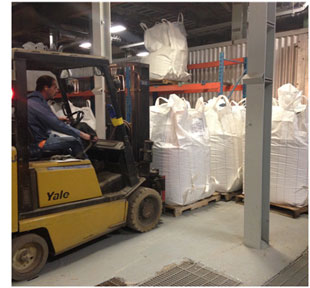 The CF product is produced at 30% solids and shipped in bulk bags.
Lighter weight papers

A 5 t/d capacity is quite high for a demonstration plant, so it provides lots of material for trials in pulp and paper mills to confirm the product's reinforcing potential in real-life processes. That ample capacity has been put to good use so far. There have been fourteen paper mill trials and two pulp mill trials, which have confirmed FiloCell's potential for a dramatic increase in wet and dry sheet tensile strength, as well as the possibility to reduce the basis weight of printing grades. 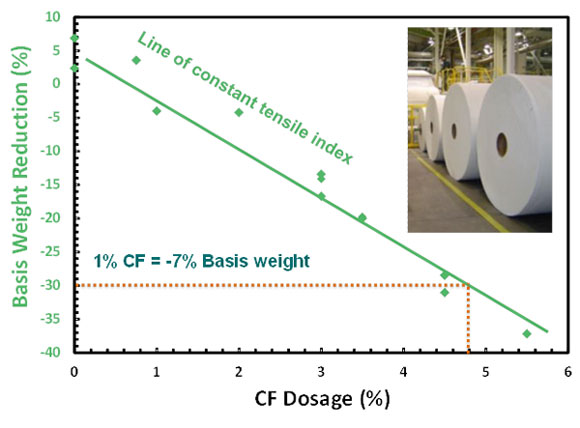 CF trials in printing paper show a good potential for making lighter sheets at the same strength
The CF production plant is built with industrially available equipment, which will facilitate the scale-up to the commercial stage. The plant is equipped with a special online CF quality analyzer developed by FPInnovations. It is used for measurement of CF strength properties and for quality control.

Currently, CF is produced at 30% solids and shipped in specially designed bulk bags. It is essential to disperse CF at the mill site using an extra pulper or a portable skid-mounted dispersion unit developed by FPInnovations. As an ultimate economical solution, CF can also be formed into a sheet on a paper machine and dried to make it easy and cost-effective to transport and store. The sheet form would be fully redispersible and contains no additives.

Of course, the impact of the new product and process on occupational health and safety was evaluated. During the plant operation it was found that total nanoparticle and particulate counts in the air were no different than in general mill areas. The CF process does not contribute to ambient levels and does not cause any health and safety concerns.

What about worldwide potential? Tolnai explains that the plant and product are still in a start-up mode so the production methods and applications are still developing. "As I mentioned in my presentation, we are ramping up production of the plant and figuring out how to produce the material and developing the applications for pulp and paper and non-traditional applications. As market demand increases, we will be able to increase the production in our plant. If there is a demand, we will meet the demand," he concludes.