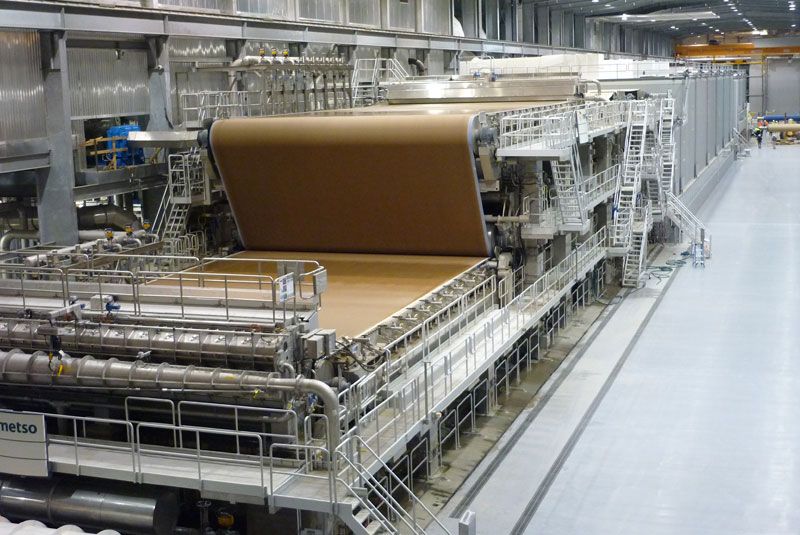 The new 540,000 tpy machine is designed for a "sweet spot" basis weight of 26 lb/1000 sq.ft. (126.9 g/m2), thus providing a market push to lighter boxes. The major investment will hopefully lead the market for the next fifty years, says Cascades' Maurice Plante.

With the on-time July 15 startup of the Greenpac Mill LLC in Niagara Falls, NY the containerboard industry must get used to a lighter weight future - from this source anyway. That is the plan of the majority owner Cascades who will operate the mill through its Norampac packaging subsidiary. The US$430 million cost of the project was financed with US$140 million equity investment of which 59.7% was invested by Cascades, 20.2% was invested by Caisse de dépôt et placement du Québec, and 20.1% was invested by Jamestown Container and Containerboard Partners.

With a better print surface quality and improved strength , this mill's 540,000 tpy output is aimed at the just developing market for lighter yet high performance linerboard products that have become commonplace in Europe and elsewhere. In Europe, the average box weights are reported to be up to 20% lighter than in North America. Maybe this trend will catch on with the startup of largest recycled linerboard machine in North America with a designed "sweet spot" production of 26 lb liner. Using world-class technology in stock preparation and the board making process will help to establish the products' performance. Better performance with a furnish-saving lighter weight sounds like a win-win combination. 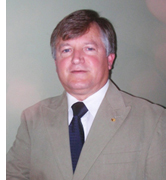 Mr. Maurice Plante, Vice-President, Containerboard and BoxboardThis major investment– the largest project ever by Cascades - was taken to lead the company into a leadership position in the containerboard industry explains Maurice Plante, Vice-President, Containerboard and Boxboard. "If you want to stay a leader in the market you need better production assets. With this new machine we now have the capability to serve the market for the next fifty years." The market potential will be developed first in Norampac's corrugated plants. "Now, we can use this low basis weight high performance product in our own box plants (to prove the concept) and this should give us a competitive advantage," he adds.

Plante explains that the return on investment favored a large 540,000 tpy capacity over a smaller machine. Of course there are risks that sales targets may not be met but those are mitigated by the fact that most of the production is already committed to Norampac mills and its partner boxboard producers. "We have firm contractual agreements for 80% of the production. The other 20% is going to the open market," says Plante.

Why was Niagara Falls chosen for the site of the new machine? "We operate an adjacent corrugating medium mill; the land was there and there was no need for a separate power plant since the steam comes from an existing co-generation plant," says Plante. The brownfield site needed decontamination but that was assisted financially by the State of New York. Logistically, the site offered other advantage according to Plante. "It is a central point for our raw material collection and our customers." Those are in the northeast USA, as far west as Chicago, and central Canada . This high volume mill in the USA balances out the company's USD to CAD cost structure. Previously, most company assets were in Canada. The new mill will be a boon to the economy of western New York and provides employment for 118 persons.

To make sure the best world class machinery and process equipment was chosen Cascades experienced project team visited many mills in Europe, Turkey and Asia that produce lightweight linerboard. In addition to quality and runnability they were looking at reliability as well. Voith was chosen for the recycled fiber plant and Metso was chosen for the 328 inch (8.33m) trim machine. That width allows for three across sets for the newer 110 inch corrugating machines. 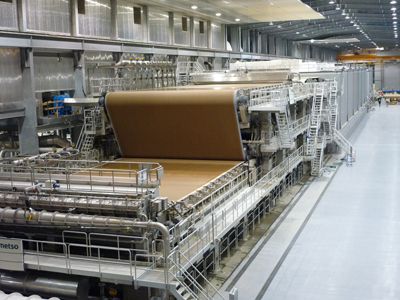 26 lb high performance board after startup 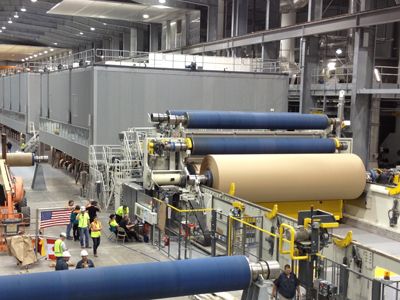 The machine produced its first reel as scheduled on July 15. Initially, the basis weight was 30lb. but that was worked down to 26 lb.

The mill has been designed to be one of the most efficient in the world, according to Plante. The energy saving technology includes variable frequency drives (VFD) on many pumps rather than flow throttling valves. Dry running turbo blowers are used instead of conventional vacuum pumps and this provides a 50% energy saving. All told, the specific electrical energy consumption is an impressive 480 KWH/t.

Similarly, fresh water is used sparingly, with lots of recirculation. Fresh water consumption is 2 cu.m/t. Steam use efficiency is rated at 3000 lbs/t.

In ground breaking news (for North America, at least) Metso is managing all maintenance systems and procedures at the mill. The agreement included the recruitment of all maintenance personnel prior to start-up. Upon start-up, Metso assumed full responsibility of the mill maintenance operations for the entire production facilities. The contract will run initially for six years.

To make this important decision, Cascades personnel visited mills in Europe where similar agreements have been in place for several years. Plante explains their reasoning for going in this new direction for maintenance. "We are papermakers, not specialized in maintenance and Metso is very well equipped to do this. Everything in this mill is new, so it is a good starting point. We would have to hire people and train them ourselves. For Metso it is already done."

With a brand new, efficient and world class mill and high quality yet lighter product, where is Cascades positioned for the future? Plante responds, "This investment allows us to be a leader in North America and allows us to grow with good profitability." As for new products on the market the company takes a cautious "just watch us" approach. Plante hints at new products in the coming months. These will be presumably tested in Norampac plants.