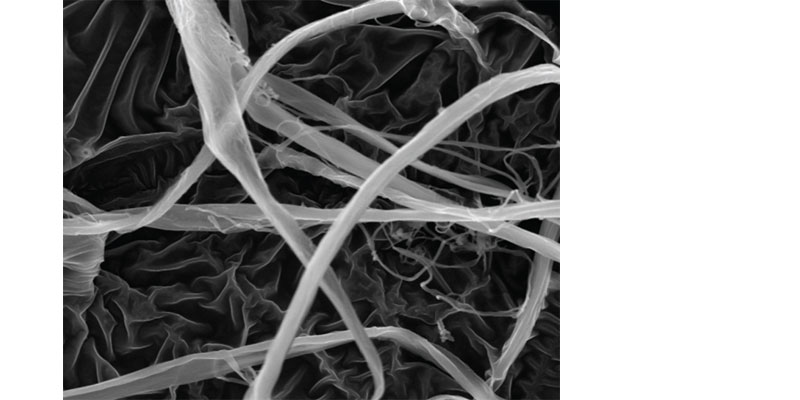 Cellulose filaments are a development of FPInnovations

The fledgling nano and micro cellulose revolution in papermaking seems to be upon us, maybe sooner than we thought.

The tempting potential for considerably lower furnish cost, superlight and superior quality grades of paper and board is a strong driving force.

In this reference-driven industry, papermakers usually want the assurance that some other papermaker has been the first to use a product successfully. But some company has to be bold, innovative and the first on the list. That threshold for cellulose microfibrils (CMF) has already been crossed by the Verso Paper mill in Bucksport, Maine which has become the first user of CMF as a continuous papermachine additive. The CMF is provided by the Imerys FiberLean process. This was the first announced continuous application, but there are a number of pilot plant-scale facilities that are now producing cellulose nano and micro-fibrils in sufficient quantities for paper machine trials. Many of the results are encouraging, as significant fiber savings and improved paper quality properties have been demonstrated. It's still early in the application development phase, but many entrants are vying for the market. In fact, the development effort going into fibrils is quite substantial and especially competitive.

First, it's important to make the distinction between crystalline nanocellulose (CNC) and CMF or CNF, the nano-scale fibrillated version. Emily Cranston, a professor of chemical engineering at McMaster University, in Hamilton, Ontario explained in a recent issue of the American Chemical Society's Chemical & Engineering News, that nanocrystals are rice-like, needle-shaped and strong with diameters in the 5- to 10-nm range and lengths on the order of 100 to 200 nm, depending on the source. CNC has been touted as an additive to produce composite materials stronger than steel, magnetically and optically sensitive materials, barrier films and flexible electronics. Even bio-medical and other esoteric applications are possible. On the other hand, Cranston describes nanofibrils, which tend to have roughly 5-nm diameters, as spaghetti-like because they are longer (a micrometer or more), flexible, and easily entangled. In other words, they are somewhat like miniscule papermaking fibers, making them a natural fit for being retained in a papermachine forming section and adding additional strength through fiber to fibril bonding. Adding to the potential value, cellulose fibrils could be a formulation ingredient in bio-plastics and other petrochemical alternatives.

New and different processes to produce fibrillated cellulose are now coming to light. For instance, in the Imerys FiberLean MFC process, fibers and filler minerals are ground together at the paper mill site to form a very fine composite material. (MFC is Imerys'term and is used by some. The emerging Tappi standard is CMF.) The mineral in the aggregate facilitates the transfer of energy to the pulp fibers thus entangling the pulp fibrils with the filler particles, providing better bonding and a more closed sheet. The aggregate is typically 5% to 6% solids so it can be pumped and mixed into a papermachine stock preparation system. Imerys says that ash level increases of 10% to 15% are possible with better bond strength and a smoother sheet, thus allowing lighter calendering. A typical 10% target ash increase requires about 2% by weight addition of MFC. A number of commercial machine trials that verify this potential preceded the start-up at Verso Paper. 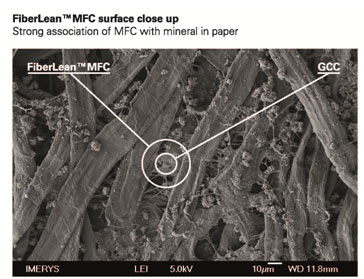 MFC and filler particles are entangled in the paper sheet. Source: Imerys 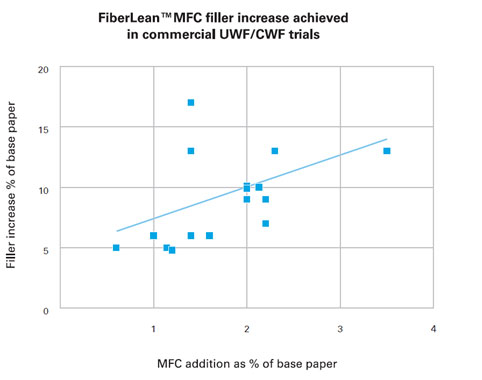 FPInnovations' and Kruger's new cellulose filament (CF) pilot plant at Kruger's TMP-based newsprint mill in Trois Rivières, QC is another important part of the micro-scale cellulose picture, although CF is different than CMF. How different remains to be seen. The 5 t/d capacity is particularly large for a pilot plant.The chemical-free mechanical process gently peels filaments from fibers and preserves the length of the original fiber according to FPInnovations description. The plant is built with industrially available equipment so scale-up to a commercial stage will be facilitated. Attesting to this practicality, the fast-track pilot plant project was up and running in June, 2014, barely six months after the initial announcement. As of September, 2014 several truckloads of CF have been produced and used in various paper mill trials and for R&D projects.

A few days after the Kruger plant startup Resolute Forest Products and Mercer International announced the formation of an agreement to commercialize uses in markets other than pulp and paper. They have chosen the name Performance BioFilaments for their product that could be a formulation component in thermoplastics, reinforced plastics, thermosets, adhesives, non-woven fabric and coatings.

There are even more new market entrants. American Process of Atlanta, Georgia has introduced its AVAP energy efficient and high yield biorefining process that can be tuned produce both nanocrystals and nanofibrils in various mixtures. The process, which uses sulphur dioxide and ethanol as pretreatment chemicals, also produces sidestreams of lignin and hemicellulose sugars. The lignin can be burned for its energy content and the sugars sold for biochemical applications. The nanocellulose products can be coated with lignin for hydrophobic applications. A 0.5 t/d pilot plant is being constructed at the AVAP demonstration site in Georgia. The projected startup is in the first quarter of 2015. 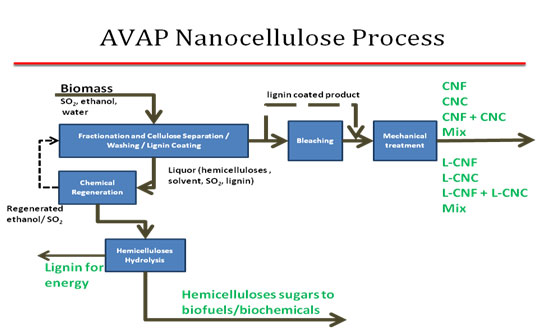 The AVAP nanocellulose process can be tuned produce both nanocrystals and nanofibrils
Group Laperrière & Verreault (GL&V) has introduced an MFC refining system using commercially available refining equipment that is common to all paper mills. The simple process uses a recirculation loop to process the fibers to a desired end target which is measured by fines level. A 1 t/d single refiner demonstration process has been installed at the University of Maine in Orono. GL&V has designed a 20 t/d scaled up production version that uses parallel recirculating refiners. The refiners have been fitted with an anti-clash system for plate protection.

GL&V has developed an MFC production system based on commercially available furnish refiners.
Since the pilot plant startup in April, 2013, over 5,000 lbs of product has been supplied to companies and research labs. Researchers at the University of Maine Process Development Center have gone one step further with refiner CMF by combining it with a patent pending encapsulated starch process to make a product called Ceranano, with the collaboration of an affiliated development company called Cerealus. This product allows micro and nanofibrils to be used in paper and paperboard manufacturing at significantly higher levels than previously possible to develop high strength, lightweight and lower cost paper and paperboard. Ceranano has been run in several commercial machine trials to demonstrate the capability to improve sheet density, porosity, surface quality and Z-direction strength (internal bond). Several commercial-scale proposals have been made, with capacities ranging from 2 to 30 t/d.

The Ceranano-containing sheet (CN-200) on the right is more closed and smoother than the control reference sheet
In addition to these new developments there are a number of existing pilot plants producing CMF and CNF, including those operated by UPM, Stora Enso , Borregaard, Innventia and Nippon Paper. The Swedish research organization Innventia and BillerudKorsnas even have a portable platform that moves between mills for trials.

The economic rewards of fibril use are compelling. The VTT Technical Research Centre in Finland has conducted pilot paper machine trials to see how much total filler content could be raised in an SC paper sheet by adding micro and nano fibrillated cellulose pre-flocculated with PCC. The study concluded that, with the improved bonding strength, sheet ash levels could be raised from a 30% benchmark to 40% or more. IGT surface strength and Scott Bond improved significantly while formation and printing properties were the same or better. Although initial drainage was slower, the total dewatering remained the same. The total furnish cost savings for an SC sheet were estimated to be 3.0% to 6.5% for the addition of 1.8% to 2.5% CMF by weight. At the 2012 Tappi nanotechnology conference in Montreal UPM researchers documented pilot machine results where 1% to 2% CMF dosage levels were used to reinforce the strength of a paperboard sheet, resulting in a significant reduction in basis weight while maintaining strength specifications. CMF may promote the move to superlight products that use less fiber than current lightweight grades.

The impact of CMF on papermachine operation and quality must be assessed, since all papermakers know that heavier refining means slower drainage and lower opacity. The effect on wet end chemistry must be evaluated, as well. Nevertheless, the enticing potential for lower furnish costs and perhaps new, superior grades of paper is a strong driving force for fibrillated cellulose use in the future.

Keep in mind that this field is still developing and open to experimentation and some questions. Moreover, these products are being produced by different mechanical means so their physical properties may be different. Even though the science is still developing, industry suppliers, pulp and paper companies and allied research organizations are lining up as competitors. That's unprecedented.

There are some inconsistencies in nomenclature that are being addressed by developing Tappi and ISO standards. For instance, some use CMF while others use MFC to describe products that have similar end uses. Then, the distinction between fibrillated cellulose and cellulose filaments could be reconciled somehow. Also, what is the measure of quality consistency and functional performance on the papermachine? Traditional tests like freeness may not apply any more so new ones may be needed. FPInnovations says that a special analyzer was developed to measure cellulose filaments. Perhaps, when all is settled, these micro and nano products will be as familiar to us as TMP and Kraft pulp.