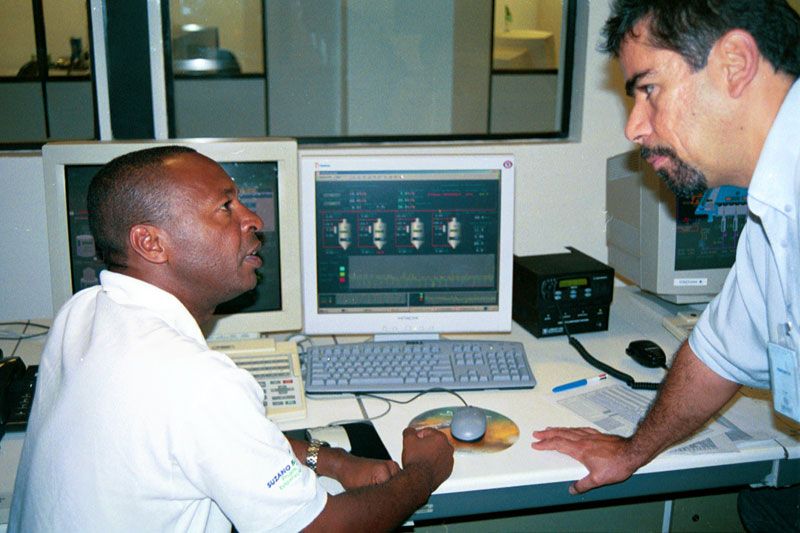 The complicated control of a batch digesting process is a very challenging task for process operators. In mills with an older DCS individual control loops and permissive actions are controlled directly by the DCS. These are the so-called base level controls. However, the operators are still mainly responsible for coordinating the complicated scheduling operation during steady state operation, and during fiber species changes and production rate changes. In many cases they are so busy with the scheduling of multiple digesters and blow tanks they miss schedule targets. Human errors are, of course, normal during these high-activity periods.

Even if a schedule is missed by a few minutes the chip filling, liquor filling, and alkali to wood ratios are inaccurate. These instabilities can be accommodated later on by operator intervention, by adjusting cooking temperatures or blow times to achieve an H-factor target. However, the consistency of cooking conditions and the rhythm of production scheduling is disturbed. This instability results in higher variability in the final product quality (Kappa number or viscosity), less stable production rates and uneven demand for steam used in the cooking process. This uneven consumption of steam can lead to upsets in other parts of an integrated mill, even causing paper machine shutdowns.

As a solution to this difficult and error-prone manual operation, supervisory optimization controls, often called advanced process controls (APC), automatically coordinate the numerous time-critical steps involved in digester charging, cooking and blowing. Figure 1 shows a typical control hierarchy which also includes advanced quality controls, steam leveling control and tank farm management. These high level controls supervise the operation of the DCS base level controls. These controls can be implemented in an existing DCS or in a PC with an OPC link to the DCS.

The consistency of each cook in each digester is regulated to an H-factor target, corrected by feedback measurements of Kappa number from either frequent laboratory measurements or an online analyzer. Online analyzers, which reproduce standard laboratory titrations, are the preferred input from a control dynamics point of view since the samples can be taken automatically and regularly (in minutes rather than hours) and they are repeatable, with no human errors. However, the optimization controls can work effectively with regular laboratory tests taken perhaps twice per shift. With steam leveling control, digester scheduling is managed so that steam consumption is very even. Also, by minimizing cooking temperatures, steam usage can be lowered. 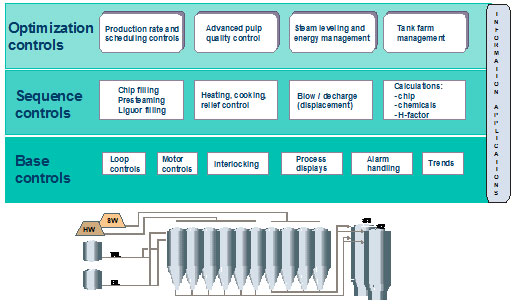 From charging to blowing

The benefits of batch digester optimization are exemplified by an 8 –digester Brazilian softwood kraft line which is split after the digesters into two blow tanks which feed two fiber lines – bleached pulp and unbleached pulp for sack kraft paper. At any time there may be two grades being cooked simultaneously in different digesters. The optimization controls at this mill include: production rate and scheduling control, cooking temperature minimization, advanced pulp quality control based on Kappa number estimation, steam leveling controls, and blow tank level prediction.

The scheduling of each of the 8 digesters is calculated according to the production rate, more specifically the number of blows for each grade selected by the operators. Two grades of pulp can be run at one time in different digesters and assigned to one of the two blow tanks.

As shown in Figure 2 all of the steps involved from charging to blowing of the digesters are completely automated. All chip conveyors start and stop automatically. The scheduling control advises operators when to start a new grade. The recipes for each of the three possible grades are entered automatically for the individual cooking control of each digester. 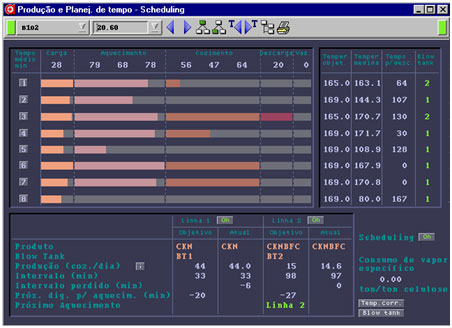 Figure 2: All phases of batch digester filling, cooking and blowing are coordinated by the scheduling controls. (Labels are in Portuguese)

The start of digester steaming is selected as base point for scheduling. The system keeps the interval between the initiations of each steaming phase as constant as possible. The scheduling program checks before the start of steaming that a digester can blow normally without waiting in a queue if , for instance, previous digesters have been late in blowing . The predicted blow tank level is also checked in order to prevent overcooking when the blow tank cannot be emptied because of a downstream process shutdown.

Advanced pulp quality controls adjust the H-factor target and/or the alkali to wood ratio target to achieve an even Kappa number. The error between Kappa target and the Kappa measurements is corrected by feedback control, whose purpose is to compensate for changes in chip characteristics such as chip age, size, fractions and long term changes in the process. An adaptive delignification model, based on the Hatton model, is used in the Kappa control algorithm. The model adapts to new grade targets and is specific to individual digesters.

Batch digesting process can cause fast and large changes to steam flow. The steam leveling control keeps total plant steam flow as steady as possible by starting and stopping all steam consuming operations as smoothly as possible. The cooking schedule is controlled so that all the available time is utilized at the full cooking temperature, within defined temperature limits. When more cooking time is available then the cooking temperatures will be lower, resulting in energy savings.

The automation and optimization system has aided the operators in making a more consistent product because it has made the scheduling and cooking conditions more predictable and repeatable. The pulping process is now much more selective in its ability to produce fiber of specific Kappa number and viscosity.

By reducing process variability and improving the stability of pulp quality this mill has been able to increase Kappa targets, thereby increasing yield and achieving the following benefits:

Results from other batch digester mills also indicate a good return on investment. For instance, at a Brazilian BEK mill steam savings of about $200,000 per year have been reported. At a European unbleached kraft mill Kappa number variation was reduced by 40%, peak production level (as measured by blows per day) was up by 16% and, with lower cooking temperatures, steam consumption was reduced by 7 to 10%.

Figures are supplied by Metso.