Better control and improved process or product stability allows target shifting, and that is where the profitability is. It's a good justification for saving energy and raw materials – and many other bottom line benefits. 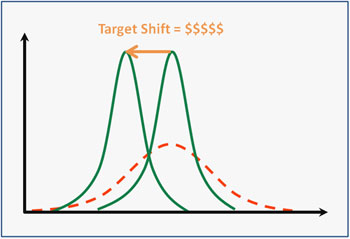 It is this target shift that makes money, often by reducing raw material consumption, improving yield or reducing energy input.

The bell shaped curve is something engineers learn about in Statistics 101, but it is remarkable how often it shows up in real life pulp and paper processes. After all, the bell curve is a so-called normal distribution - a statistical representation of normal operation, whether it's optimized or not optimized. However, the academic writers of the textbooks used in engineering schools might be surprised how many times statistical science is used not only as an engineering tool, but as a way to improve the economics of pulp and paper operation. It works in practice, so it is worthwhile keeping the old lessons in mind.

The theory is simple but the effective execution is more complicated and sometimes difficult. It all centers on what is normal operation and how it can be improved by better control, process modifications or changed operating procedures. If a process is stabilized and the normal situation is better, the bell-shaped curve of a key indicator is narrower. In other words, the spread of the data is less. If the extreme ranges of these indicators can be eliminated then the target operating point of a process can be changed significantly without any sacrifices. The average might be different but the problematic highs and lows are not a factor any more. It is this target shift that makes money, often by reducing raw material consumption, improving yield or reducing energy input. Reducing variable costs to improve profitability is a basic axiom of Economics 101.

The concept was used years ago when suppliers were installing equipment and controls to improve paper moisture profiles. If the spread of the profiles could be improved the average moisture could be increased without calender blackening, which was the major drawback. This target shift saved fiber furnish on paper grades like newsprint which is sold by the ton.

The practice of statistics-based target shifting is still used today to justify expenditures which can improve process or product stability and to actually make the change in operating point with a degree of certainty. Let's look at a few cases from fiber lines.

The first priority in any pulp mill is to produce an even quality product that satisfies customers' expectations, and brightness is one of those top qualities. However adding more bleaching chemical past a certain optimum point no longer produces a corresponding brightness increase. In many cases the chemical dosage is kept above this optimum limit in order to ensure the minimum brightness from the line exceeds customer specifications. This is typically what operators do in a manually controlled operation. When the standard deviation of brightness is reduced due to more effective process control, this "safety margin" can be cut, resulting in significant chemical savings.

A Brazilian BEK mill implemented Compensated Kappa Factor Control (CKF) in a fiber line D1 stage. This model-based control uses online Kappa, brightness and chemical residual measurements. With CKF control, the post D1 brightness variability was reduced and that carried through to final product. The average brightness under control was slightly lower than before because the brightness values higher than target – when the pulp was over-bleached - were reduced considerably. Most significantly, the low out-of-spec brightness values were eliminated. There have been no pulp brightness downgrades since the control was implemented. 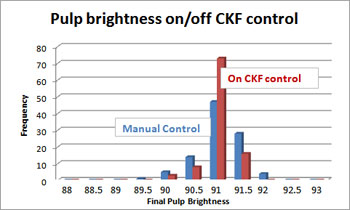 Final pulp brightness variation was reduced by better control. The extreme values have been eliminated. With that stability established, chlorine dioxide consumption was reduced in a controlled way.

Similar statistical analysis and target shifting has been used in another Brazilian BEK mill to optimize the yield in a continuous digester. Chip quality variation was a major problem. With the implementation of continuous model-based cooking controls the variation in Kappa number has been reduced considerably and the average Kappa number has been increased. With this steadiness, pulp yield could be increased, thus reducing the cost of wood per tonne of pulp. Similar results were seen in a Finnish BHK/BSK mill. 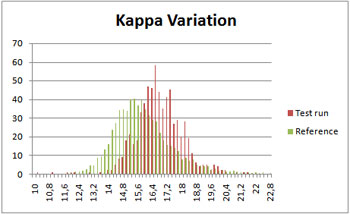 Kappa number variability from a Brazilian BEK continuous digester has been significanly reduced, allowing the Kappa target and yield to be increased. 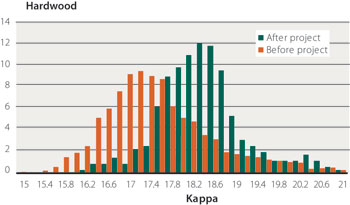 Similar results were seen in a Finnish BHK/BSK mill.

The same target shifting principles apply to papermaking. By reducing variability, fiber consumption can be reduced or shifted to lower cost furnishes. Today, it seems that most papermakers want to increase ash content because it reduces costs. Statistical analysis, coupled with measures to reduce variability, is a proven way to do it.

So brush up on your basic statistics and economics. They go together.