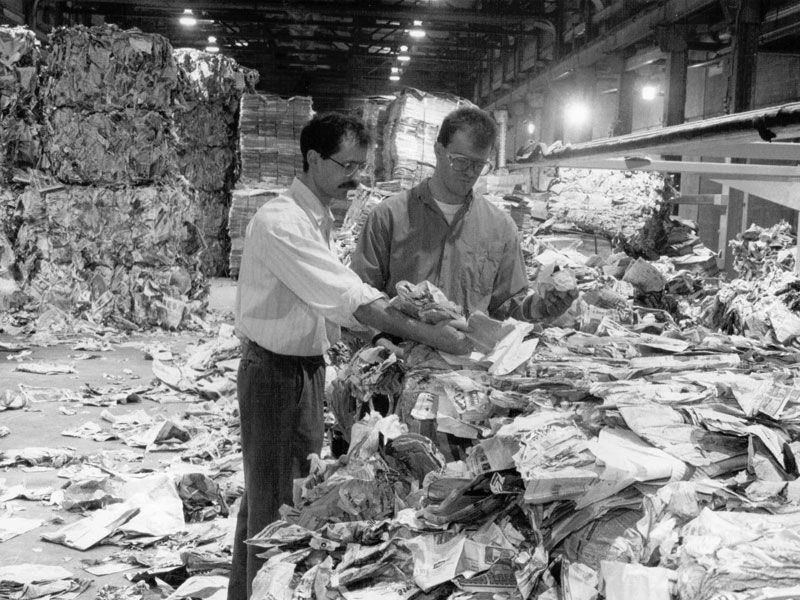 In March 2017 the newsprint mill in Thorold, Ontario was indefinitely idled. Ontario Paper Company started up this mill in 1913 and was a pioneer in the field of recycled furnish, having experimented with it briefly during World War II to extend its pulp supply.

Around that time, there were seven other newsprint mills running a 100% recycled furnish in North America. They were located at Coosa Pines (AL), Dublin (GA), Newberg (OR), Pomona (CA), Sheldon (TX), Snowflake (AZ), and Whitby (ON). Today there are none. What factors led to this rise and fall?

In the mid-1800's, all newsprint used in North America was 100% recycled... from cotton rags! But around the 1870s, the industry switched to wood-based material, because it was much more readily available and therefore able to meet the surging demand for newsprint. At that time, a typical newsprint recipe was 40% sulphite pulp and 60% stone groundwood pulp.

A hundred years later, thermomechanical pulp was the primary furnish for newsprint. It was strong enough to be the sole pulp furnish, creating huge improvements in productivity.

And then, in the 1980s, the environmental movement began to have an influence. Based on a fear that landfill sites were filling up across the US, municipalities started establishing curbside collection programs, before figuring out where all this recovered material would go. In 1989 and 1990, they found themselves having to pay processors as much as $40 per tonne to take away the collected old newsprint. They started pressuring their state governments to implement legislation, and soon eight states had laws dictating minimum recycled content in newspapers.

Newsprint manufacturers scrambled to build deinking plants. For certain mills that still had multi-pulp furnishes and were fairly close to large urban centres where recovered paper was readily available, it made economic sense to switch to a single recycled furnish, using a mix of old newspapers and old magazines to get the right pulp strength.

Municipalities then figured out they could save money by "single stream recycling", dumping all recycled materials into one truck at the curbside. Unfortunately this transferred both capital and operating costs to the paper mills. It became necessary to replace batch pulpers (which got clogged and damaged by plastic, glass and metal contaminants) with drum pulpers, resulting in a lower pulp yield and therefore a higher cost per tonne.

Due to supply and demand fluctuations, the cost of recovered paper swung between $40 and $140 per tonne, a huge variation when the selling price of newsprint was about $500. In the late 1990s, newsprint production began to explode in Asia, almost all of it from 100% recycled furnish. Asian mills close to ocean ports started importing recovered paper from wherever they could get it, paying very little for marine transport, as the containers used to export merchandise such as televisions and computers abroad had to be returned anyway. This "China effect" was one of the driving forces that forced the closure of many 100% recycled newsprint mills in North America, because they could no longer afford the recovered paper from their own "back yards".

On top of this was the decline in North American newsprint demand, which went down from a 1988 peak of 14 million tonnes to 4 million in 2015, about the same as in 1945. The Thorold mill was able to be competitive with virgin newsprint when recovered paper prices were on the low side, but had to take market downtime several times since 2008 when this price swung to the high side.

The newsprint mills that will survive the longest are the ones that have the most sustainable raw material and shortest distance to their market. They will be close to the forests in North America, using residual wood chips from sawmills, or close to the ocean in Asia, using recovered paper from countries with sustainable forestry.