The milestone occasion was marked by a weeklong itinerary of events, but culminated in a reception on June 30. While the Lachute location celebrated two solid decades of continuous operations, Cristini as a company has been in business for a century, reaching its 100-year birthday in 2014. The company's head office is stationed in Italy, along with two other of its facilities.

Cristini continues to invest in its Lachute operations, with a recent $3 million injection to upgrade its production lines to enable the production of spiral fabrics. An additional $2.5 million investment was made to purchase new supporting machinery. "This is also something for us to celebrate," noted Feola. Efforts to transfer the required technological knowledge from the company's European team wrapped up very recently, which ensured that Cristini's local machinists and engineers are fully up to speed.

Montoglio characterizes the company's expansion into the production of spiral fabrics as a solid execution of a decision taken by the company's forward-thinking executive team. "This product is highly specialized," Montoglio says. "It allows Cristini to be the only producer of flat yarn spiral fabrics in North America. These are used on modern and very rapid machines that produce a variety of paper grades." The company has doubled its production in the last year, and its expansion into spiral fabrics is accompanied by growth in another area – diagnostics systems offering.

Affirming the Importance of a Skilled Workforce

"Today is a special occasion for our operation here, it shows the success we've had over the last 20 years and can only be the proof of our growth in North America," Feola remarked at the reception. "Cristini counts more than 1,000 customers in 50 countries and this is truly the sign of our significant growth," added Montiglio. The role our Lachute facility and its employees have played in this success story is not negligible. Our employees have played a key role in Cristini's success over the past 20 years."

The company's executives took the opportunity to offer particular thanks to two of the company's longest employees; Daniel Demers and Jean-Pierre Belisle – the former still working at the plant today. "With many others that are now retired, these dedicated employees have contributed fabulous time and effort towards the sustained accomplishments of the plant," Feola noted.

The company's success is also attributed to those not directly under its employ. E Paul LEgault, a lawyer specializing in international business, was noted as an integral player in helping the company establish itself in Canada. He also served as the company's first plant manager in Lachute, and the facility itself was constructed during his tenure.

Dignitaries present also stressed the reputation of the local workforce. Stéphane Lauzon, Member of Parliament for Argenteuil-La Petite-Nation (federal) congratulated Cristini on its important anniversary and reminded guests that it was one of his government's priorities to ensure the sustainability of good manufacturing jobs in regional communities. Lauzon reminded the crowd that such occasions offer a unique opportunity to stress the importance of people working on the floors of facilities. He recalled his own earlier experiences as a factory worker in the pulp and paper industry in the 1980s, and reflected on some of his fond memories of this time. Yves St-Denis, Member of Parliament for Argenteuil (provincial) and Parliamentary Assistant to the Minister responsible for Labour, explained that Lachute was one of the most important economic and commercial hubs of the Argenteuil RCM and confirmed his resolution to provide any assistance necessary to Cristini in order for the company to thrive in the province of Quebec. With a touch of humour Scott Pearce, warden of the Argenteuil RCM mentioned that people in the region were not only very employable but welcoming and very pleasant. Carl Péloquin, Mayor of Lachute, stressed the importance of the municipality's growing industrial park and thanked Cristini for its presence and for being its first occupant. 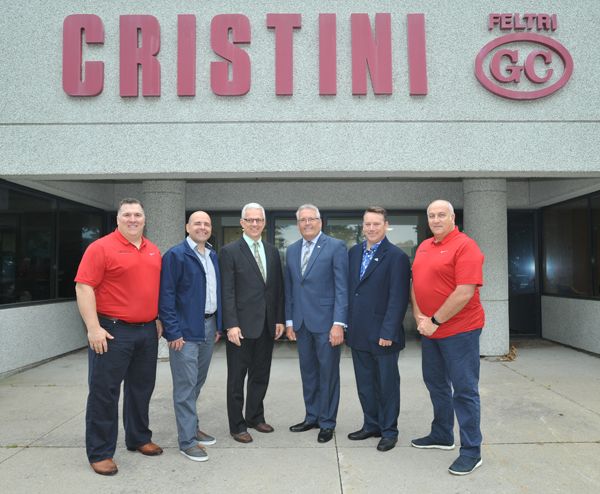 The Lachute region's socioeconomic history has also played a critical role in Cristini's success story. The area's close connection to the textile and paper industries provided an ideal location for Ayers Felts, a textile firm that became well-known for its felts that supplied the pulp and paper industry. The original Ayer plant was established on the west bank of Rivière du Nord (close to Lachute). Prior to Cristini's arrival in the region, however, the Ayers plant was forced to relocate, providing the Italian company with a clear market opportunity.

When Cristini arrived on the scene, it began producing carrier ropes, the likes of which had never been seen in Canada. The company rented a 5,000 square-foot facility near the Lachute airport. "Before building our own plant we used to rent that small space," recalls Montiglio. More than the location, what convinced management to make the move to Lachute was "the presence of a very skilled and dedicated workforce, historically attached to the Lachute area."

Montiglio recalled Cristini's early collaboration with Cascades in the early 1980s, citing the fact that at the time, Cristina provided products and services to plants Cascades had acquired in France. A relationship built on mutual trust ensued between the two companies, and it was at the invitation of Cascades that Cristini first visited Canada.

At the time, Cristini was solicited to establish its plant close to Edmundston, New Brunswick. But, in the aftermath of the Ayers plant closure, word got out about the skill and professionalism of the roughly 300 laid-off workers in the region, and the decision was made to capitalize on their expertise and open a plant where those workers were - in Lachute. The decision was only reinforced by the municipality's decision to change the name of the industrial park's main boulevard to the company's name. Cristini was grateful for the gesture, and set up shop in the region.

The Next 20 Years in Lachute

For the company, Lachute remains an excellent entry point to the North-American market. The advanced engineered fabrics the facility churns out support high-quality papermaking, and Montiglio is convinced the time is ripe for expansion. Time will tell, but it looks like future success is in store for the company. After all – history does tend to repeat itself.