On October 24, Kruger hosted nearly 100 employees, dignitaries and partners to celebrate the end of a project that saw a complete rebuild of a paper machine at its Trois-Rivières, QC, facility.

The machine now manufactures 100% lightweight and high-strength linerboard. The wrap up of the project was a celebrated occasion in the region, and marked the conclusion of a two-year project and $250 million investment by Kruger and the Quebec Government.

The venture was a strategic one for Kruger. Not only did it help the company reduce its exposure to shrinking newsprint markets, it marked yet another step in the company's efforts to reinvent itself and secure its future. The company has been in the business of churning out 1.2 million tonnes of newsprint every year, and had done so since the early 2000s. The conversion of its No. 10 paper machine, however, will reduce this output to 600,000 annual tonnes, and as of last May, the Trois- Rivières facility no longer produces newsprint at all. This move aligns closely with North American demand for newsprint, which has plummeted by 65% since 2000. Socioeconomic changes and increasing reliance on digital media help explain this trend, and also help account for the contrasting success of the linerboard market, which is growing. More than 30 million tonnes of linerboard are produced in North America each year, and the market has grown at a rate of 2% annually in the last decade. Online shopping, which creates demand for well-packaged products, have helped fuel the sector's growth, and are keeping the likes of Kruger, alive and well. "The new linerboard grades manufactured on PM10 meet increasing demand for ultra-light packaging without compromising on strength, performance or environmental footprint," the company notes. The conversion also allows Kruger to capitalize on familiar territory; four of its plants (Place Turcot Containerboard Mill in Montreal, QC, the LaSalle, QC, Brampton, ON, packaging plants and now, the Trois-Rivie?res Mill), already specialize in the manufacture of containerboard products and corrugated packaging solutions made from 100% recycled fibre. 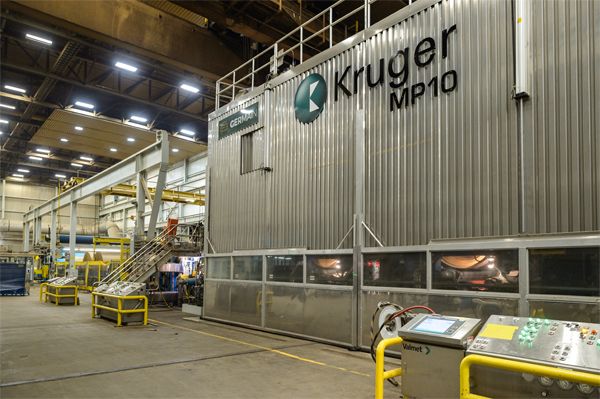 Nicolas Cloutier, General Manager, Kruger Trois-Rivières Mill participated in last week's event and expressed his gratitude for all of those who worked on the transformative project, making special mention of the technical feat the team achieved by converting the papermachine, while continuing to produce newsprint.

The project took a total of 20 months, and held true to deadlines and budgets, which enabled the company to continue to produce newsprint on the machine until the 'last minute.' The undertaking took 500,00 work hours and employed roughly 5% of Quebec's industrial construction workforce in 2015-2016.

Michael Lafave, Senior Vice President and Chief Operating Officer, Kruger Packaging, was visibly proud of the collaboration between partners in the project. According to Lafave, Kruger did not only inaugurate a new linerboard machine, but a brand-new factory. He thanked the employees for their flexibility in the face of rapid change and noted the project was a critical part of his predecessor's strategic vision. Tribute was also paid to Daniel Archambault, Executive Vice President at Kruger. "Daniel is the true maestro of this transformation. Ultimately, Kruger will manufacture 360,000 metric tons of linerboard in Trois-Rivières. The new product is called "XTR" and imposing XTR rolls are already coming out of the factory. Depending on the desired grade, 700 metres and soon 1000 metres are produced every minute at the mill.

Lafave explained that "some of Kruger's plants are already using linerboard made on the new machine and that the remainder is being sold to packaging producers across Canada and the U.S. ». On a final note, Lafave noted that « today marks the beginning of a new era of growth for our company. » 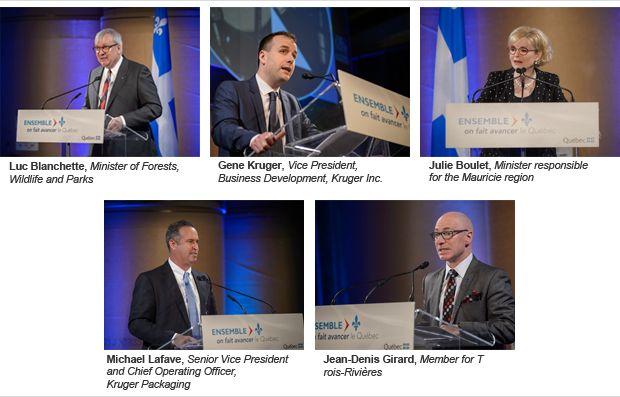 Luc Blanchette, Minister of Forests, Wildlife and Parks used the occasion to remind the audience that the conversion of the plant demonstrates the new approach the Quebec government has to financing projects. "the Quebec government no longer abides by a sole subsidizing approach when public participation is desired, but rather views partnership in a holistic manner." Note that Investissement Québec holds a 25% interest in Kruger Packaging - "a company that has more than $ 600 million in assets and employs more than 800 people, including 620 in Quebec." Blanchette declared with a grin that he is « un p'tit gars de Trois-Rivières » (boyhood spent in Trois-Rivières) and because of this, he is even prouder to see the Kruger mill benefit from such an investment. The Minister responsible for the Mauricie region, Julie Boulet, noted that if the company's management had not believed in the employees, and their ability to adapt, they would never have invested in such a project. National Assembly Member for Trois-Rivières, QC, Jean-Denis Girard underscored his belief that a new era is beginning for Kruger and noted that the project offers many spin-off opportunities for many small and medium-sized businesses in the region.

Gene Kruger, Vice President, Business Development, Kruger, closed the even by reflecting on its importance for the company, drawing a parallel between the project, and the takeover of the plant by his father and grandfather in 1973. Kruger said he felt the conversion of the paper machine represents the same philosophy of entrepreneurial innovation his forefathers had, noting that since 1973, the company has poured more than $1 billion into the plant, and with every investment, opens the door to growth. 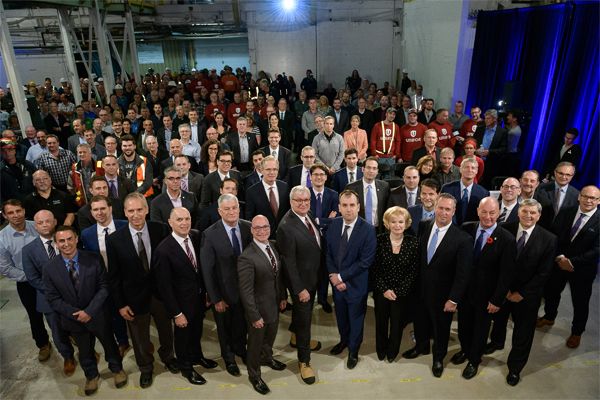 Kruger Packaging L.P. specializes in the manufacture of containerboard products and corrugated packaging solutions made from 100% recycled fibre. The Montréal-based company employs 800 people and has four production sites, namely the Trois-Rivières Mill, the Place Turcot Containerboard and Specialties Mill (Montréal, QC), and the LaSalle, QC, and Brampton, ON, corrugated packaging plants.

Founded in 1904, Kruger Inc. is a major producer of tissue products; 100% recycled containerboard products; corrugated packaging; publication papers; specialty papers; renewable energy; cellulosic biomaterials; and wines and spirits. The Company is also a leader in paper and paperboard recycling in North America. Kruger Inc. has facilities in Québec, Ontario, British Columbia, and Newfoundland and Labrador, as well as in Tennessee, Maine, New York, Virginia and Rhode Island in the United States. (www.kruger.com).