The cup is produced as demonstrator in order to prove the technology.

This is where TMP and CTMP production technology in existing mills comes into the picture. This piece will deal with a couple of interesting Swedish projects going on utilising existing TMP plants.

Supported by the Swedish Innovation Agency Vinnova, the innovation project KoTräKo within the programme framework "Challenge Driven Innovation Step II" is going on based on a technology concept developed by Biofiber Tech Sweden. The concept is based on a combination of chemical treatment to make the fibre more amenable to the polymer and TMP pulping.

The KoTräKo project is based on a patent owned by Biofiber Tech which is working as a key technology developer and integrator together with top Swedish research institutions, Swerea SICOMP, project leader, and RISE Processum, as well as several with well-known industry enterprises covering the whole value chain from forest to plastic, Sveaskog, Holmen, Inxide, Orthex Group, PODCOMP and NEVS. A couple of household things, e.g. cups, have been produced as demonstrators in order to prove the technology. KoTräKo is a two-year project and ends 2019. The goal is to continue the cooperation and in the next phase verify the concept in a full industrial scale ready for commercialisation. 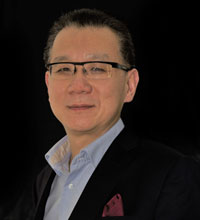 Eric Zhang, Biofiber Tech Sweden"When this concept is implemented in full scale any mechanical pulp mill should be able to produce the fibre-based composite," says Eric Zhang, Managing Director and founder of the start-up technology company Biofiber Tech Sweden. "One of the challenges to reach a bioeconomy is to replace the big volumes of fossil-based products. The interesting thing with our process is that it can be implemented in pulp mills with existing TMP equipment and infrastructure. This means that you can process large wood raw material volumes efficiently."

"Our technology is aimed for existing TMP refiners, which due to declining markets for newsprint and other mechanical paper grades are or will be idle. For a TMP plant with an overcapacity and with space for compounding, pelletizing and warehousing this might be an opportunity. Capital costs will be manageable which altogether creates a cost-efficient set-up." 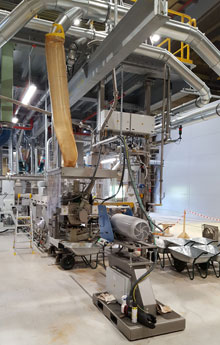 The compounder at the Stora Enso Hylte Mill.Another project which already is commercialised is Stora Enso's fibre-based composite plant in Hylte in Sweden. Due to the declining newsprint market Stora Enso during 2012 and 2013 closed two out of four newsprint machines in their Hylte Mill in southern Sweden. It was of course a drastic move, but it triggered activities and ideas in the mill on what could be produced utilising the closed TMP plant one way or another. One idea that proved to be useful was to produce a composite material based on a mixture of TMP pulp and plastic with the aim of gradually increasing the proportion of TMP pulp.

A team with a true entrepreneurial spirit developed the idea and early in the process potential customers were identified as project development partners, which proved to be very successful. In order to get necessary knowledge about plastic and composite production, cooperation was established with other parts of Stora Enso as well as with universities and research institutes. An advantage was also that Hylte is located not far from the "plastic cluster" in southern Sweden, which made cooperation easier.

The project developed successfully and in January 2017 the Board of Directors decided to invest 12 million euro in a production plant for fibre-based composite in the Hylte mill. The plant was inaugurated in June this year and is, with an annual production of 15,000 tonnes, the biggest plant in Europe dedicated to wood fibre composites. In the process TMP pulp is granulated and compounded with granules of plastic or bioplastic, depending on customer demands. The product, a wood fibre-based biocomposite, is branded as DuraSense and delivered as granules to customers within the plastic industry.

Going back not too many years ago it would have been a true uphill struggle to suggest research or even worse investment money for development and production of fibre-based composite material utilising existing TMP refiners. TMP pulp should be used in paper grades, end of story! However, as my grandmother used to say, "it's not the same day everyday" and old truths are not forever cut in stone.

The forest industry's traditional value chains are not gone but in addition other value chains like textile, chemical and plastic are appearing and of which our industry become important parts. The future is challenging but rewarding for all who see and grasp the opportunities. 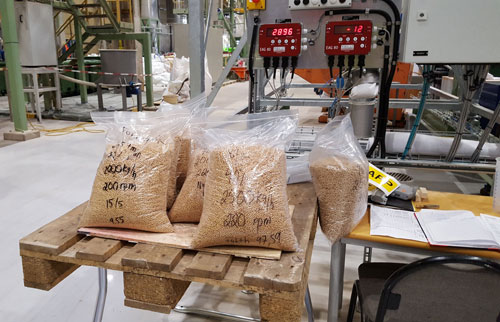