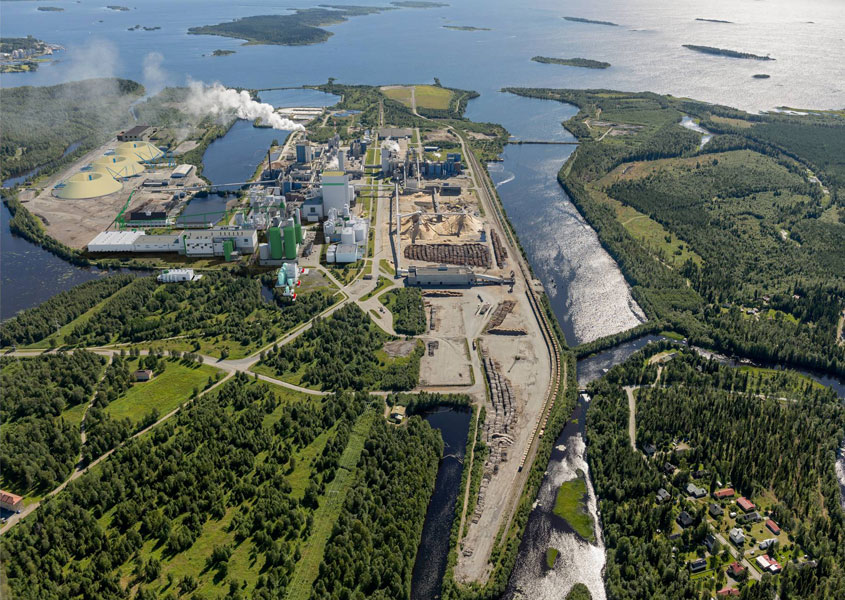 Metsä Group runs a pre-engineering project for building a bioproduct mill with a capacity of approximately 1.5 million tonnes of softwood and hardwood pulp in Kemi. Photo: Metsä Group.

The Finnish Forest Industries Federation provides comprehensive information about the industry which is the base for this blog contribution. During 2018 Finnish pulp mills produced 8.15 million tonnes of chemical pulp and the first quarter of 2019 shows an increase of 6.5 per cent compared to the same quarter last year. Like elsewhere paper production is decreasing, reaching 6.73 million tonnes during 2018, which when comparing Q1 2019 with Q1 2018 is a decrease of 6.1 per cent. Paperboard production is rather stable and during 2018 it ended up at 3.81 million tonnes. To make the picture complete 11.81 million m3 of sawn softwood and 1.23 million m3 of plywood were produced during 2018.

The first voluntary sustainability commitments of the forest industry in Finland were published in 2013. These commitments have been renewed and now cover the period until 2025. They are summarized in 17 bullet points including all responsibility, ecological, financial and social dimensions, guiding the whole forest industry sector to make even more sustainable choices.

The three big ones

The pulp and paper industry is dominated by three major groups: UPM, Stora Enso and Metsä Group. In 2018 Finland had 19 pulp mills (many integrated), 17 paper mills and 14 paperboard mills. Out of these nine are owned by UPM, fifteen by Stora Enso and twelve by Metsä Group (Metsä Board, Metsä Fibre and Metsä Tissue). Stora Enso and UPM are number two and three in Europe, seven and eight in the world, and both had sales of about 10.5 billion euro in 2018. The Metsä Group sales in 2018 was 5.7 billion euro.

Since a couple of years a lot of money has been invested in mills and in research in order to step by step adapt to changed market conditions of traditional products and to new opportunities created by sustainability demands. A few will be mentioned below.

Metsä Group has very aggressive investment plans, mostly in Finland but also in Husum in Sweden. If implemented in full the total value of these investments would amount to approximately EUR 2 billion during 2019–2023. The vast majority of this investment, EUR 1.5 billion, would be spent for a new bioproduct mill in Kemi in northern Finland, which will replace the present pulp mill. Following the outcome of the prefeasibility study launched in May 2018, a pre-engineering project to create conditions for building a bioproduct mill with an annual production capacity of approximately 1.5 million tonnes of softwood and hardwood pulp is now initiated.

In addition to pulp, the mill would produce various other bioproducts. This mill would be the biggest wood processing unit in the Northern hemisphere. The current Kemi pulp mill has an annual capacity of around 620,000 tonnes and is partly integrated with a kraftliner mill producing white top kraftliners.

Further north in Finland, in Kemijärvi, the company Boreal Bioref Oy has plans to build a biorefinery producing about 500,000 tonnes of biomaterial and biochemicals including dissolving pulp, long fibre market pulp, pine oil, turpentine, MCC, C6 and C5 sugars, and bioenergy, electricity and soil improvement substances. The size of the investment is said to be EUR 950 million. The environmental permit is currently under consideration at the Regional State Administrative Agency of northern Finland. 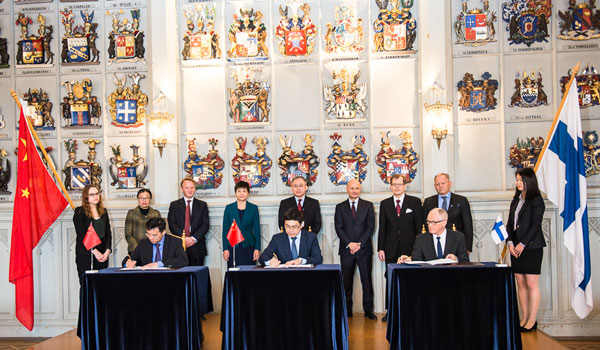 The original plans were that the investment decision was to be made by the beginning of 2019, and construction to take place during 2019–2020. The refinery was envisaged to start operations in early 2021. As no news about an investment decision has been published (late May 2019) the plans seem to be delayed. Chinese paper and packaging products maker Shanying, which bought Nordic Paper in Sweden in 2017, is planned to take a major stake in a planned biorefinery plant in Kemijärvi. Therefore a financing approval by the Chinese authorities is needed as it will be a matter of getting capital out of China.

Finnpulp Oy, another Finnish-Chinese owned company seems to be closer to realize the plans of a bioproduct mill located in Sorsasalo outside Kuopio. They have got the environmental permits and a pre-engineering study will be completed during 2019. According to the company the mill will be the largest softwood pulp mill in the world with an annual capacity of 1.2 million tonnes. The pre-engineering includes preparation of construction stage of the mill’s processes, technologies and mill site layout. Once finalized the company will make its final investment decision on the construction of the mill in Sorsasalo.

So the big question is; Will all three bioproduct mills materialize or will some of the plans be postponed or stay on the drawing board?

Stora Enso Oulu has so far been the biggest producer of coated fine paper in the Nordic countries but the mill is in for big changes. So far its two wide paper machines has had a capacity of more than one million tonnes of coated woodfree papers. Based on the technical and financial aspects of the feasibility study results, Stora Enso has decided to invest approximately EUR 350 million to convert the Oulu paper mill into packaging production. The investment includes converting PM7 into kraftliner production, and the closure of PM6 and sheeting plant, modification of the pulp mill and drying machine for unbleached brown pulp, as well as investments to enhance the mill’s environmental performance. The converted machine will have a capacity of 450,000 tonnes brown and white kraftliner and production is estimated to start by the end of 2020. Stora Enso has already converted one paper machine at Varkaus Mill to produce kraftliner. 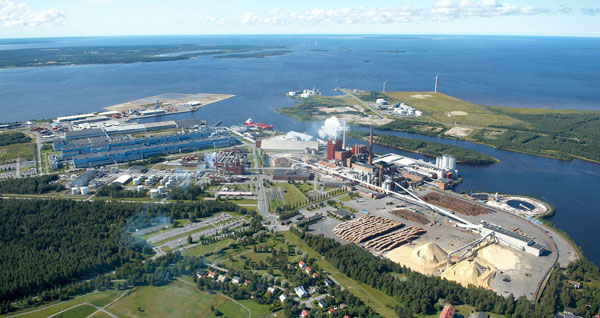 The Stora Enso mill in Oulu will be converted to production of 450,000 tonnes brown and white kraftliner. Photo: Stora Enso.

At Stora Enso Imatra PM6 is another paper machine to be closed. It is one of the smaller machines in the mill, which pre-dominantly produces board, and has a capacity of 90,000 tonnes of one-side coated woodfree paper. The machine has come towards the end of its life and is scheduled to be closed down at the end of the year. In Stora Enso’s fluting mill in Heinola the C-Green company has installed its first Z-HTC unit which will convert 16,000 tonnes of fibre sludge to hydrochar. HTC is an old technology which has got its revival during the last decade and is a process I covered in an earlier blog contribution.

UPM has a number of investment plans and activities going on, the heavier parts of it outside Finland although Finnish investments are not forgotten. The project for a new two million tonnes pulp mill in Uruguay is in its second phase, making preparations of many kinds for a final investment decision.

The Environmental Impact Assessment of possible UPM biorefinery for Mussalo, Kotka has been completed. The proposed site is in the area of a dismantled power plant. Photo: UPM.

The Environmental Impact Assessment (EIA) for UPM's possible Kotka Biorefinery in Finland has been completed and given to the authorities for their final conclusions. The UPM Kotka Biorefinery would produce approximately 500,000 tonnes of advanced biofuels made from sustainable raw materials for use in the road transport, marine and aviation sectors. The biorefinery's products could also be used to replace fossil raw materials in the chemical industry. In Germany basic engineering is completed for a potential 150,000 tonnes biochemicals refinery. Since 2015 UPM is producing biodiesel in their Kaukas mill in Lappeenranta based on tall oil and with a capacity of 100,000 tonnes. Quite obviously UPM is boldly targeting the biofuels and biochemical markets.

Paptic, a new bird in the Finnish pulp and paper nest

A company in a totally different phase of its expansion is Paptic Oy with its product Paptic Tringa. It was founded in 2015 and is a spin-off of the VTT Technical Research Centre of Finland, and its patented technology is based on VTT R&D work. The Paptic material is a biobased, recyclable and renewable next generation packaging material made of sustainable wood fibre and suitable usages are where plastic films have previously been the only alternative. 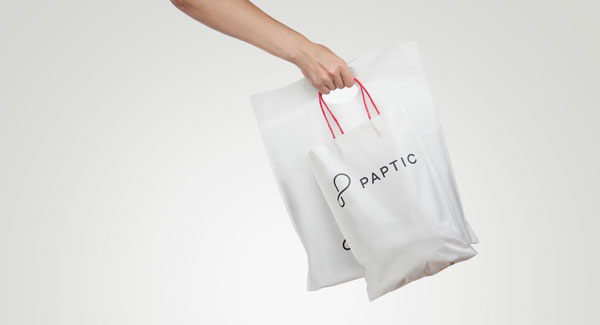 The patented technology developed by Paptic gives a wood based material with functionality similar to plastics. Photo: Paptic.

The production technology is called Foam Forming and two thirds of the material are cellulose fibres and depending on endues other fibres are added. Currently Paptic is conducting a feasibility study for upscaling its production, as well as investment negotiations. The aim is to set up an industrial scale demonstration plant and begin production by the end of 2019, with an initial production target of 20,000 tonnes. According to an article in German Handelsblatt in March this year the company is interested in buying Melitta’s Neu Kaliss mill.

So, not only is Finland World Champions in ice hockey but is also aiming higher with its pulp and paper industry with all its different branches.