The headline could indicate a straight line from trees to some kind of a vegetarian dish, although the latter would be quite a challenge for the stomach.

Historically this was actually the case, primarily in Scandinavia, when poverty and starvation due to crop failure forced people to produce so called bark bread. A crash course on bark bread runs like this: During spring the inner bark (the phloem, the only part of a tree which is edible) from pine, birch, aspen and some other deciduous trees was collected, dried over open fire and ground.
The bark flour, which unfortunately gives a bitter taste, was added to the dough in proportions like 1/4 to 1/3 and mixed with wheat or rye flour. The resulting bread was hard and brittle and as soon as the crops were back to normal the bark bread disappeared from the tables. Today, though, bark flour and bark bread pop up in health food stores of all places! Finally one last piece of useless information: the energy content in 100 g of bark flour is 82 kcal.

Side streams become protein
Recently a far better, although more complicated, way of turning wood into food has been developed in a series of research projects headed by Processum in Sweden. Processum is a subsidiary of the RISE Research Institutes of Sweden and is located in Örnsköldsvik, a town in northern Sweden. What began as laboratory trials in 2011 to produce Single Cell Protein, SCP, for fish feed from a pulp mill's side stream has developed way beyond that. The most appropriate person to account for these projects is Björn Alriksson, Group Manager, Biotechnology at Processum, who is responsible for a number of SCP projects.

The idea of producing SCP from industrial side streams is in fact nothing new. During the First and Second World Wars, some research went into producing SCP, although primarily as human food. The reason that the SCP concept would work today when it failed before, is the current eco-awareness, combined with the sharp price rises caused by the prospect that protein raw material (i.e. fishmeal) is running out. There have been other experiments with mixed results, in which the fish proteins were replaced with soya protein for example. The benefit of SCP is that the protein comes from microorganisms such as bacteria, yeast, algae and filamentous fungi. Genetically, they are closer to animals and humans compared to plants such as soya. They also reproduce and double their populations very quickly. A couple of kilos of microorganisms can grow to a weight of several tonnes in a day. 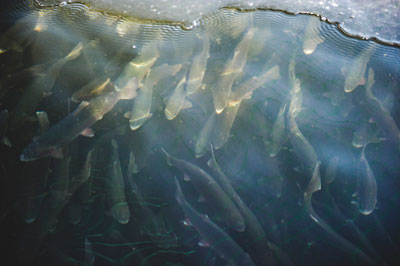 Fish breeding is a growing business and needs increased production of fish feed.

Proteins for fish feed
"Producing single cell protein is not a new concept," explains Björn Alriksson. "What is interesting is the fact that we have been able to produce SCP from forest industrial side streams, i.e. wood. Primarily, it has to do with protein that can be used for fish feed, but there are hopes that one day it could also be used as food for other animals and even humans. SCP has numerous advantages as it can be cultivated regardless of weather, requires less land utilisation than production of other sources of protein and adds no excess nutrients to our eco cycle."

Today, fish at fish farms are often fed either using fishmeal or soya bean meal. Both sources of protein are controversial. Fishmeal production poses an environmental threat, as large quantities of fish are removed from the ocean and ground to make fishmeal. In many cases, soya bean meal is produced in areas where rainforests would otherwise grow. Single cell protein comprises protein-rich microorganisms that can be cultivated in bioreactors. This does not affect both the oceans' fish stocks and the rainforest.

"So far we have only tested single cell protein as feed on one species of fish, Tilapia," Björn Alriksson continuous. "But our research is now looking to find additional applications for the protein. Huge volumes are required to ascertain profitability for single cell protein from residue streams from the forest industry. It also has to be ensured that fish eating the protein are healthy for the fish as well as for anyone who eats the fish". A project was launched during 2016 to test the protein in salmon farming.

All in one place
In Örnsköldsvik there is a unique setup with equipment that can cater for everything from laboratory-scale to large demonstration-scale studies, which combined with Processum's expertise, attracts stakeholders interested in single cell protein for various purposes. National and international universities, institutes and companies are collaborating with Processum on single cell protein.

One of the current projects is 'Forest fish, the fish of the future are growing on trees'. This is a project aiming at creating a new value chain from forest to table. The ultimate objective is to develop a pilot infrastructure that can demonstrate the entire value chain for the circular production system: forest>fishfeed>farmed fish>forest fertiliser. 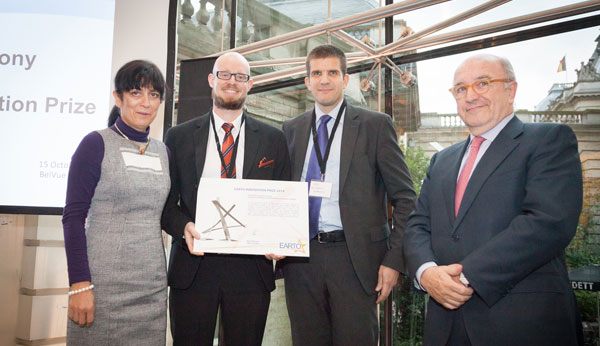 Analysis of the entire value chain from wood to fish
"In order to become reality, however, there is a need for efficient and profitable production," Björn Alriksson stresses. "A Swedish-Norwegian collaboration project involving Processum and PFI in Trondheim is currently running aiming at further developing processes and products based on wood and industrial residue streams, including protein production for fish feed, and to carry out a market and economy analysis of the entire value chain from wood to fish. The development of these new products will strengthen the existing industry as well as create new companies based on forest raw materials. Another aspect of the project focuses on evaluating and developing SCP to create a microorganism that has a protein content as high as or higher than fishmeal, with the hope that it could be used in other food production." 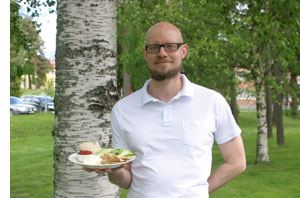 Björn Alriksson ready to serve a single cell dish."Our research has resulted in awards, including the EARTO Innovation Prize in 2014 for the Greenfeed project. This was the first Swedish research project to have received that award. The reason given was the huge commercial potential of the technology and product. There is intense pressure from the market to develop sustainable fish feed, and we see a great potential in single cell protein. At the end of 2016 our application for the Salmonaid project was granted, which will bring our technology closer to market replication," Björn Alriksson concludes.

Integrated pulp production and fish breeding?
Provided the future SCP research and market studies continue to deliver good results, it might be in the cards that not only SCP production but also fish breeding might take place next to a pulp mill. So who knows, the typical smells from a sulphate or a sulphite pulp mill might in the future be complemented by a scent of fish breeding and fish cleaning?