Metsä Board has taken a new board machine producing folding boxboard into operation. Courtesy of Metsä Board

Swedish pulp and paper industry is really showing confidence which has materialised in all time high investments.

The most eye-striking are four major ones, two pulp mills for NBSK and two board machines. In addition to these, a number of other projects to increase capacity and quality are taking place.

This article will give a broad overview of what is now going on. The investments have extended suppliers' order books in a satisfying way and this investment bonanza has appeared in a similar way as mushrooms do in the autumn. For a long time there is nothing to be seen, but suddenly mushrooms are everywhere. 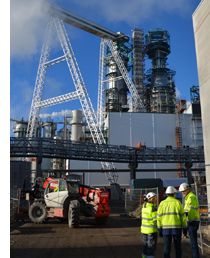 Next in line to be completed was Södra Cell Värö pulp mill for NBSK pulp where the inauguration took place last September. The original mill was taken into operation in 1972 and was already two years later integrated with a sawmill. All investments as of the new recovery boiler in 2002 have been done with a possible future expansion in mind. So already before the recent investment of 4.5 billion SEK, about 660 million CAD, an expandable recovery boiler, a fairly new lime kiln and a modern evaporation plant with space for additional evaporation effects were in place.

"We like the single fibre line principle," says Jonas Eriksson, Mill Manager at Södra Cell Värö in southern Sweden. "Therefore we have one continuous digester, one recovery line, one bleach plant with possibility to bleach ECF and TCF, one lime kiln and one pulp dryer. The only exceptions are two debarking drums and chippers as well as two biological treatment dams. The rebuilding of the mill was done during full production and we actually scored all time high in production in spite of all building and installation activities going on at the same time. In Värö our capacity has now increased from 425,000 to 700,000 tonnes of NBSK and today the sawmill has a capacity of 600,000 m3 and is one of the biggest in Sweden." 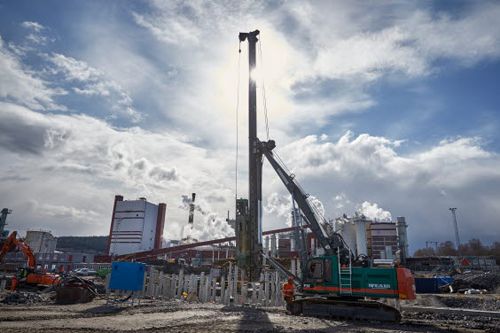 The SCA Östrand mill will have the biggest softwood fibre in the world. Courtesy of SCA.
The SCA Östrand sulphate pulp mill was originally taken into operation 1932 and already 1936, with a capacity of 140,000 tonnes softwood pulp, it was the biggest in Europe. Today the present Helios project will bring the capacity of NBSK from 430,000 tonnes up to 900,000 tonnes and make it the biggest NBSK fibre line in the world. With an investment budget of 7.8 billion SEK, about 1.14 billion CAD, it is one of the absolute biggest industrial investments ever in Sweden. In Värö the whole new mill was started in one go after a six week period when connections of all kinds were completed and the new pulp dryer was in place. SCA Östrand, however, is starting the different parts of the fibre line stepwise. When finished, which will be in June 2018, the result will be a totally new and very efficient pulp mill with side streams of interesting volumes for further processing into other than traditional pulp applications.

BillerudKorsnäs Gruvön will get one of the biggest board machines in the world once the investment project is finished. Courtesy of BillerudKorsnäs

The fourth giant investment is being done by BillerudKorsnäs and comprises investments in the Gruvön mill in central Sweden. The reason behind this investment of in total 5.7 billion SEK, about 835 million CAD, is to strengthen the product offer of packaging material to the market. The investment includes construction of a new board machine at the Gruvön production site and rebuilds in the existing pulp mill. The board machine will have an annual capacity of 550,000 tonnes of board, making it one of the largest of its kind in the world. The machine will produce liquid packaging board, cartonboard, food service board and liner. Production is expected to start in the first quarter of 2019. A consequence of the project is also that four older machines in the mill will be closed.

In Finnish Tervasaari, BillerudKorsnäs had one unintegrated MG machine producing 100,000 tonnes. It has been closed down and moved to the Skärblacka mill, which will turn the mill into a global leader in the manufacturing of white MG kraft paper and create a competitive platform for growth. This is an investment of 1.3 billion SEK, about 190 million CAD.

Södra Cell has also over the last two years invested one billion SEK, roughly 150 million CAD, in a new evaporation plant and washing of the unbleached dissolving pulp at the Mörrum mill. The mill has two pulp lines, one hardwood dissolving and one NBSK line and is, with some further debottlenecking investments, aiming at a total production capacity of about 500,000 tonnes 2020 at the latest.

The Södra Mörrum mill is aiming at a capacity of 500,000 tonnes of viscose and NBSK pulps. Courtesy of Södra Cell

Rottneros runs two non-integrated pulp mills for market pulps, Vallvik producing bleached and unbleached specialty softwood kraft pulps and Rottneros producing CTMP and groundwood pulps. In 2016 the mills' total production was about 375,000 tonnes. However, Agenda 500 is an investment programme aiming at a total production of 500,000 tonnes in 2020. During 2015-2018 some 620 million SEK, about 90 million CAD, are invested in the two mills.

When adding up the total investments in this article the sum is ca. 3.4 billion CAD spent over less than four years within the Swedish pulp and paper industry. In addition there are of course a number of smaller investments taking place during the same period, bringing the sum closer to 4 million CAD.
In Canada, Kruger has turned a newsprint machine in Trois Rivières into a liner machine based on recycled fibre. Stora Enso has done something similar, rebuilding a newsprint machine in Finnish Varkaus into a paper machine for kraftliner and white top liner. So far we have not yet seen any Swedish newsprint machine being rebuilt to produce liner. Most likely this will not happen due to the situation of each of the newsprint mills and although the corrugated board market is growing, it cannot swallow too much additional capacity.

Vallvik is one of the two Rottneros' mills investing in higher capacity. Courtesy of Rottneros