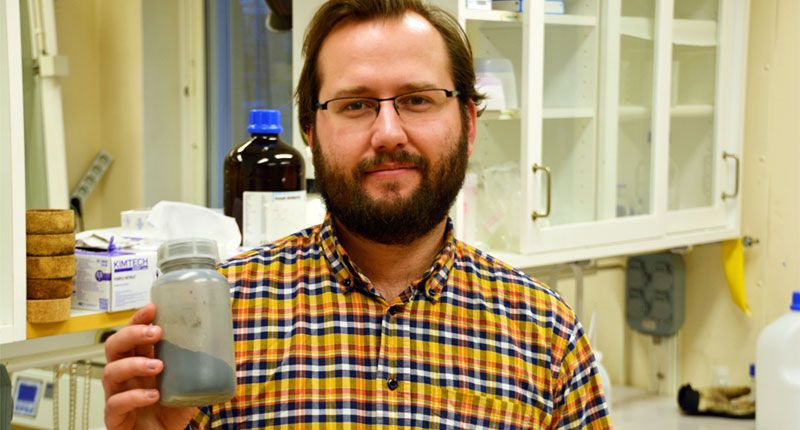 In Sweden, green liquor dregs are used to cover mine waste deposits

The forest industry has, with a few exceptions, been totally focussed within its own value chains, from raw material to the end-user of converted paper and board products. However, cooperation across industry borders are beginning to take place like e.g. between pulp mills and mining industry.

The world is changing for the forest industry, not only because the demand for printing, writing and office papers is going down. Also important is the increasingly tougher competition and the necessity to increase efficiency and energy utilization, reduce waste and emissions as well as to get more value out of the wood raw material. Preferably, all at the same time.

Traditionally pulp and paper producers as have been used to solve their problems "within the family". This is nothing unique but is common in many other process industries as well. However, when people start to look for opportunities across traditional "industry fences", a number of new possibilities are opened. One such is the very promising cooperation going on in Sweden between a couple of pulp mills, universities, research institutes, a recycling company, technical consultants and mining companies. The purpose is to develop a practical method to mix green liquor dregs and till, which is a geological term for the soil, sand and rocky deposits left after glacial retreat, to an efficient sealing layer for mine waste deposits. 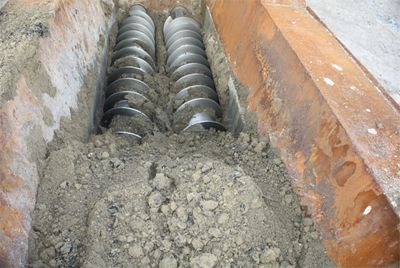 Mixing of green liquor dregs and till gives an efficient sealing layer. Photo: Pär Odén, RagnSells.
The mining industry in Sweden is concentrated in two areas: Bergslagen, an area stretching across the middle of Sweden, and the northern parts of the country. In these areas there are a number of decommissioned mines where the waste deposits are covered traditionally with silty/clayey till. Örebro University in Bergslagen and Luleå University of Technology, LTU, next to the northern mining area are actively conducting research to find new, efficient and economical methods to remediate mine waste deposits.

Some three years ago SP Processum, together with a couple of pulp mills, started a project aiming at finding a use for green liquor dregs in which its unique properties would give advantages. The objective was to evaluate the suitability for use in sealing layers for sulfidic mine waste.

Researchers at LTU had observed in laboratory trials that the hydraulic conductivity of seven different types of green liquor dregs fulfilled the geochemical and geotechnical requirements to be used in mine waste cover. A PhD work by Maria Mäkitalo showed that about 10 % addition of green liquor dregs to till was sufficient to take full advantage of its hydraulic properties and sufficient compaction could be achieved.

Therefore a large scale project started in northern Sweden. It is a two-step project led by SP Processum in cooperation with Boliden Mineral, Ragn-Sells, MTC, SCA Obbola, Domsjö Fabriker, Luleå University of Technology, Ecoloop and Ramböll. The first step was the construction of a one year field trial with an embankment containing mine waste and covered with a packed mixture of green liquor dregs and till. The purpose with the sealing layer is to create an oxygen barrier which minimises oxidation and metal leaching over time. 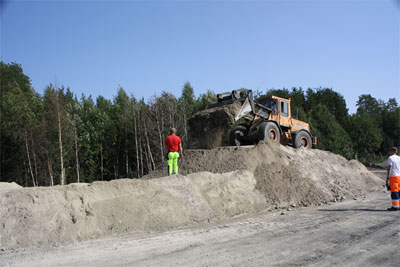 Preparation of the embankment. Photo Pär Odén, RagnSells.
During 2015 the water infiltration was measured with very promising results. However, the embankment has not completed its service yet, as it will continue to be evaluated. The embankment will actually generate interesting data over a number of years. The second step in the project is a full scale covering trial of a 4.5 hectare waste rock deposit at a decommissioned Boliden mine.

"Pulp mills have earlier seen the potential in green liquor sludge, a by-product from the chemical recovery process, but have not been able to find a good use for it," says Gunnar Westin, project leader at SP Processum. "Green liquor dregs is a dense material and has a good capability to hold water out and is therefore sometimes used to cover mills' own landfills. The mining industry, on the other hand, has had difficulties in finding appropriate material to cover mine waste deposits to avoid leakage of heavy metals to lakes and rivers." 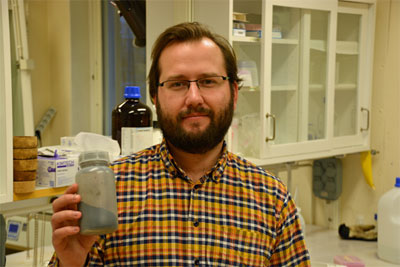 "Green liquor dregs was chosen because it is alkaline, has a low hydraulic conductivity, and bind water hard, properties that are attractive for covering mine waste," says Christian Maurice, project manager at Ramböll and LTU. "Based on the research work done, green liquor dregs is mixed with sieved coarse till where the dregs fills the porosity in the till. An amendment of a small proportion of green liquor dregs to till gives a stable cover material. But it also means that the functionality must remain over many decades, perhaps even centuries, which means that the mining companies have to base the calculation on cost per hectare and decade, as having to remake the mine waste sealing later is very costly."

At Örebro University another technical solution using green liquor dregs, also supported by SP Processum, is underway. The purpose is the same, i.e. finding a method to avoid leakage of heavy metals from mine waste. As the mining industry is a very old activity in Swedish Bergslagen, the "Stora roots" in Stora Enso e.g. dates back to a copper mine in 1288, there are mine waste deposits of very old weathered waste rock. Some are even protected as a cultural reserve and their exterior must be preserved. The researchers are therefore developing an injection method in which green liquor dregs of a suitable concentration is injected to stop leakage of water containing heavy metals. This method has also proven to be efficient.

In order to spread the knowledge about how to use green liquor sludge as an important ingredient for covering mine waste, LTU and SP Processum are actually in the process to write a handbook/guidance on the subject. A similar handbook will also follow on the injection method.

A lesson to be learned from this cross industry border cooperation, apart from the issue itself, is that a problem on one side of the industry fence can solve a problem on the other side, killing two problems with one stone, by also involving universities and technical institutes.