The SunPine biorefinery is located right at the coast.

Piteå in northern Sweden is well-known for the production of kraftliner at SCA and Smurfit Kappa, in total more than 1.1 million tonnes, and may probably be the world's kraftliner capital.

The story behind the development of SunPine is very interesting, and in some aspects unique, and hence well worth telling. The idea of extracting green diesel from crude tall oil came from Lars Stigsson, a Swedish chemist and innovator, who in 2005 studied how to do it technically. He worked together with the chemist Valeri Naydenov who developed a ready model for the process to extract green diesel from tall oil.

From laboratory to industry scale in one step

Lars Stigsson promoted the idea and got Sveaskog, Sweden's biggest forest owner, Södra, the big market pulp producer, and Preem, the largest fuel company in Sweden, interested. As they put 100 MSEK (11 million USD) each into the project of building a biorefinery to extract green diesel from crude tall oil, their interest was obviously not just lip service. Sveaskog, Södra and Preem, together with Lars Stigsson's company Kiram, formed Sunpine AB in 2006. A full-scale production facility was set up in record time, an investment of around 350 MSEK (38 million USD), and was taken into operation in 2010.

The remarkable fact, which shows the strong confidence the owners had in this totally new process, is that the project without further ado in one step went from a process, verified in laboratory scale only, to a full scale tall oil biorefinery. This could maybe serve as an example for also other actors wanting to walk a new and greener path. Sometimes one must dare to jump into the water knowing that the ice is gone but without knowing the water temperature. 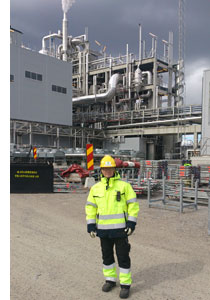 Magnus Edin, CEO of SunPine, in front of the biorefinery."It might not seem very logical to establish a tall oil biorefinery in Piteå, which is in the very northern part of Sweden," says Magnus Edin, CEO of SunPine. "However, there are logical reasons for it. Piteå is located at the sea with a harbour with existing available storage tanks and big enough to allow tankers, transporting the green diesel to Preem's refinery in Gothenburg. On the raw material side we have two sulphate mills next door and as we are located in a harbour we have good transport possibilities of crude tall oil from all sulphate mills along the Swedish coast. So the industrial logic is there."

"Previously we extracted three products from the crude tall oil: green diesel, bio oil and turpentine. However, in 2013 we started a cooperation with the Dutch chemical company Lawter who were looking for rosin to be used as raw material in their products. The results of this cooperation were that we developed a process how to extract rosin from the crude tall oil, a decision was taken to invest in this process and Lawter entered the group of owners buying a ten per cent share of Sunpine AB." 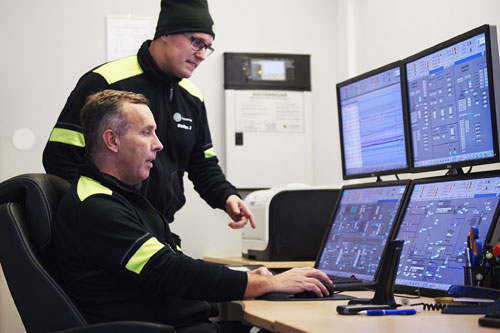 Today Sunpine therefore refines 180,000 tonnes of crude tall oil to green diesel, bio oil, rosin and turpentine. The process is not chemical but purely a physical one in which temperatures, pressures and flows are varied in the process. First water and turpentine is removed, as they have the lowest boiling temperatures. Step two is the distillation column, the heart in the process, where the green diesel ends up at the top and a rosin rich fraction at the bottom of the column. Thereafter the rosin fraction is upgraded and at a temperature of 195 oC fed into heated containers to avoid the rosin to solidify during transportation to Lawter's plant in Belgium. The rosin is processed and used in products like printing inks, tape and glue but also in chewing gum.

The whole production of green diesel is transported by tankers to Preem's refinery in Gothenburg where oxygen, sulphur, nitrogen and aromatic components are removed resulting in the final diesel product. This product is mixed into Preem's product Evolution Diesel and used in diesel vehicles. All in all, two percent of Sweden's total diesel consumption of five million m3 is today produced in Piteå by Sunpine.

"From our refinery we also get about 50 000 tonnes of bio oil from the crude tall oil we buy," says Magnus Edin. "This product is sold back to pulp mills where it is used e.g. in their lime sludge reburning kilns." 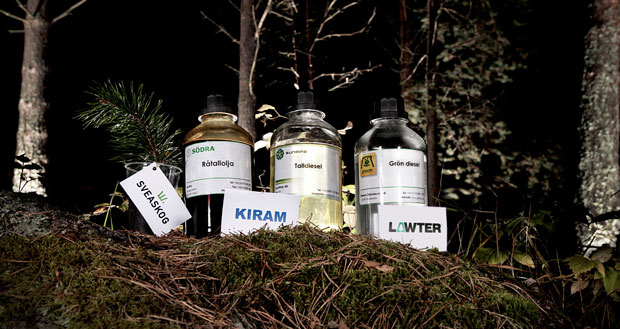 "An odd product in our portfolio is the 2,000 tonnes of turpentine we extract every year. It is hardly possible to imagine the end-usage of it," Magnus Edin says with a smile. "Anyone who has got a bit of turpentine on the clothes knows that it is impossible to wash away and that the smell is almost as bad as the famous Swedish "surströmming", a fermented hate or love object of Baltic herring. However, the perfume industry, of all industries, has found a method of getting rid of the smell but keeping the turpentine's sticking capability. By adding the cleaned turpentine to perfumes it prolongs the perfume molecules' lifetime, and hence fragrance, on a perfumed skin somewhere on the body."

Rosin is a "useful" thing

The author of this blog in his younger days came in contact with rosin in two, from each other very different, contexts. One was the need to wipe the violin bow's horse hair with rosin in order to be able to produce more or less, for the family, violin teacher and other innocent listeners, of the painful sound from a violin beginner. The other context was when I as a somewhat naughty boy tried to wake up sleeping people by rubbing rosin against a taut string attached to the sleeping audience's windows. The noise from this rosin application exceeds the one from the beginner's violin by quite some dB... 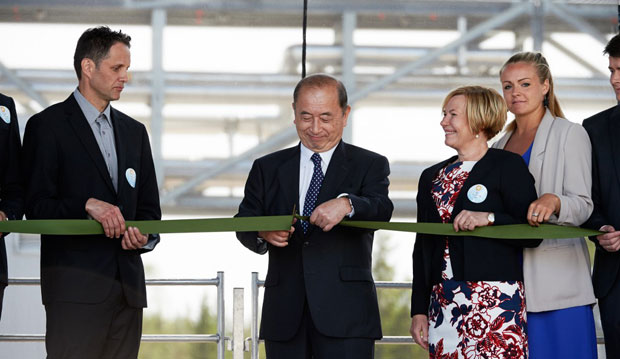 The new plant was inaugurated and the ribbon cut by Yoshihiro Hasegawa, CEO of Harima Chemicals, the owner of Lawter.