Resolute Forest Products is building on its strategy of pursuing initiatives that improve cost position, advance diversification, provide synergies or position the company to expand into future growth markets 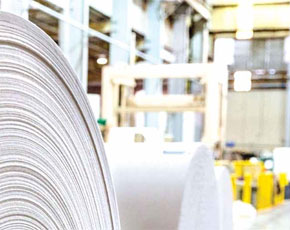 Resolute Forest Products is in most respects far removed from its forerunners. Not unusual for any company that can trace its roots back nearly 200 years. Fundamental changes have taken place in the world since Resolute's predecessor, William Price Company, was established in Quebec in 1820 as an exporter of lumber to Great Britain.

The history of Resolute Forest Products is long and complex, and interesting to say the least, and involves many prominent pulp and paper companies. The focus of this story, however, will look at today's Resolute and the strategy the company continues to implement to diversify its product mix towards growth markets and a more sustainable future.

Resolute Forest Products Inc. is the result of a 2007 merger between two rival pulp and paper companies — Bowater of South Carolina and Abitibi-Consolidated of Montreal, Canada — to form AbitibiBowater. Following a difficult period that began towards the end of 2008, AbitibiBowater in October of 2011 announced that it would change its name to Resolute Forest Products "to better reflect the fundamental characteristics of the company." Interestingly, the name change followed an initiative launched six months earlier in which employees were invited to suggest a new name for the company. An internal selection committee and the Executive Team chose 'Resolute Forest Products' from among some 1,400 employee submissions.

In November of 2011, the company began using the new name and legally enacted the change after formal shareholder approval at its Annual General Meeting in May of 2012.

During the course of the years to follow, Resolute steadily transformed its business strategy by realigning its product mix. Although the company remains the largest producer of newsprint in the world and the largest producer of uncoated mechanical papers in North America, Resolute has diligentlypaced production with the structurally-declining demand for those grades of paper.

On the growth side of the coin, Resolute has bolstered its ability to produce market pulp, wood products and energy. It has also entered the tissue market. 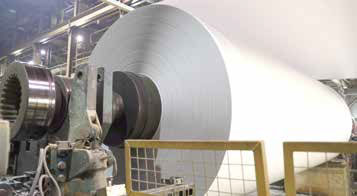 To make the strategic move towards growth markets, a number of measures took place. On the pulp front, in May of 2012 Resolute acquired Fibrek, which came with 752,000 metric tons of market pulp capacity. The company would also invest in a pulp capacity expansion project at its Calhoun mill, and in May of this year announced a $52.3 million strategic investment plan for its Saint-Félicien pulp mill, located in the Lac-Saint-Jean region of Quebec.

"The significant investments at Saint-Félicien are expected to improve several areas of the operation, increasing the average daily production capacity by 76 metric tons and reducing greenhouse gas emissions from the use of fossil fuels by 20%," said Yves Laflamme, Resolute's President and CEO.

In wood products, Resolute started-up a rebuilt sawmill at Ignace, Ontario in December of 2014 with some 115 million board feet of lumber capacity. Six months later, a new sawmill in Atikokan, Ontario was started-up with over 145 million board feet of lumber capacity. In April of this year, Resoluteannounced a $13 million investment in its La Doré, Quebec wood products facilities. 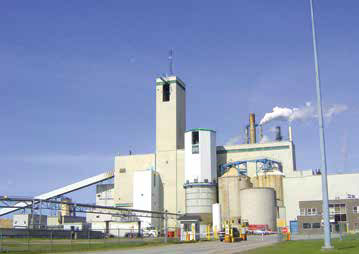 In May 2018, Resloute announced an investment plan totaling $52.3 million for the Saint-Félicien pulp mill in the Lac-Saint-Jean region of Quebec. The investments will focus on increasing the mill's average daily production capacity by 76 metric tons and reducing greenhouse gas emissions from the use of fossil fuels by 20%.

Resolute entered the tissue market with a turn-key purchase in mid-November of 2015 with the acquisition of Atlas Paper Holdings, a manufacturer of at-home and away-fromhome tissue products, including recycled and virgin paper grades. The Florida-based business came with three tissuemachines with a combined annual production capacity of approximately 65,000 short tons; 14 converting lines in Hialeah (Miami) and Sanford (Orlando); and a paper recycling facility in Tampa.

The acquisition of Atlas also brought with it the benefits of Atlas' know-how and expertise in tissue manufacturing, its sales and management teams, and access to its customer base.

The Atlas deal came on the heels of Resolute's June 2015 announcement to build state-of-the-art tissue and converting facilities on the site of its Calhoun pulp and paper mill in Tennessee with a production capacity of about 66,000 short tons (60,000 metric tons) per year of at-home, premium bath tissue and towel focused on the private label market. The $270 million project represented the largest investment made by Resolute since 2010.

Then CEO, Richard Garneau, noted, "By integrating our U.S. pulp assets to produce high-quality products, we will compete in that market (tissue) as one of only a few integrated producers, using the latest technology."

Without a doubt, Resolute was 'all in' to the tissue market. 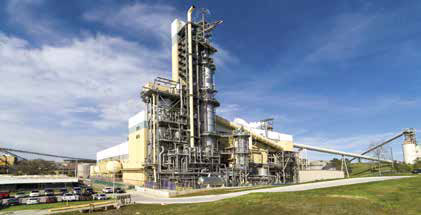 In March 2018, Resolute's Calhoun (Tennessee) operation was named 'Most Energy-Aware Mill' by Tissue World. The honor is given to mills whose energy reduction efforts as well as overall sustainability initiatives stand out.

Resolute would continue with its strategy to integrate pulp into high quality tissue with the January 2016 commissioning of a new continuous pulp digester at the Calhoun mill. The new digester would increase the company's market pulp capacity by another 100,000 metric tons per year.

The Calhoun mill site remained a busy place in 2016, with the first production of bath tissue and towel coming off the first new converting line on August 17. The facility's other two tissue converting lines would be ramped up before the end of that year.

On March 29, 2017, Resolute announced the successful start-up of the new tissue machine in Calhoun. The first tissue parent roll was produced about a month earlier on February 28.

As mentioned earlier, Resolute is the largest producer of newsprint in the world with eight mills that have a combined production capacity of 1.8 million metric tons representing about 8% of worldwide capacity and 43% of North American capacity. The business segment serves major markets throughout North America and abroad and supplies customers in over 50 countries.

As also mentioned earlier, Resolute is the largest producer of uncoated mechanical papers in North America, with 22% of capacity, and the third largest producer of coated mechanical papers, with 14% of North American capacity. The specialty paper segment has a total annual production capacity of approximately 1.1 million metric tons across six mills. The business sells a wide range of papers, including uncoated freesheet grades, to major commercial printers, direct mailers, publishers, catalogers and retailers, mostly in North America.

Although demand for newsprint and specialty papers continues to be challenged by structural declines in the markets, reduced industry capacity in 2018 has created a more favorable market balance.

Resolute is the third largest producer of pulp in North America with production at seven facilities and a total capacity of 1.7 million metric tons or 10% of North American capacity. The company produces a variety of grades, including softwood and hardwood pulp, fluff pulp, northern bleached softwood kraft (NBSK) pulp, and recycled bleached kraft (RBK) pulp. 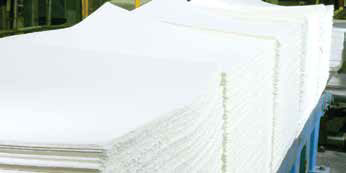 Resolute is the third largest producer of pulp in North America with production at seven facilities and a total capacity of 1.7 million metric tons or 10% of North American capacity.

Resolute is the largest Canadian producer of wood products east of the Canadian Rockies. The business manufactures lumber and other wood products for the residential construction and home renovation markets, as well as for specialized structural and industrial applications. Operations include 19 wood products facilities with the following production capacities:

In regards to lumber, Resolute's 14 sawmills produce construction-grade stud and dimension spruce-pine-fir lumber and are a major source of wood chips for the company's pulp and paper mills in Canada. The sawmills also generate wood residue, which is primarily used to fuel the company's powercogeneration assets and other operations, as well as to produce wood pellets. In 2017, Resolute shipped 1.9 billion board feet of construction-grade lumber within North America.

Resolute is also involved with the development of biomaterials. In June of 2014, Resolute announced the launch of a new research and development joint venture with Mercer International. The JV, Performance BioFilaments Inc., is focused on the development of commercial applications for cellulose filaments, a source of sustainable biomaterial made from wood fiber that can be used to add strength, stability, flexibility and longevity to a variety of materials, including cement, composites and coatings.

Performance BioFilaments can supply cellulose filaments in two forms, depending on customer needs and preferences in the areas of product applications, logistics and storage. Cellulose filaments can be supplied in wet fluff form, with a specific moisture content, typically ranging from 30% to 50% filament material.

Cellulose filaments are also available in rolls of dried film for applications that require the product to be stored for long periods of time or shipped over large distances. Cellulose filament films are readily dispersible in water or other solvents, and once dispersed, have similar properties to the fluff form.Most interestingly, cellulose filament films have the potential to be used directly as a layered component in the production of certain laminated composites.

In January of this year, Resolute and FPInnovations announced an investment in the implementation of a TMP-Bio pilot project in Thunder Bay, Ontario. The focus of the pilot project is on developing new ways to efficiently produce and commercialize bio-chemicals derived from wood, contributing to the development of a bio-economy in Northern Ontario, as well as elsewhere in Canada.

According to Resolute, the $21 million project is part of an initiative to renew and transform the forest products industry, building on investments made in 2012 by Resolute, the Ontario Centre for Research and Innovation in the Bio-Economy (CRIBE), and Natural Resources Canada. This investment covers cost of capital and R&D and has the support of the Northern Ontario Heritage Fund Corporation (NOHFC), CRIBE, FedNor, the City of Thunder Bay CEDC and Natural Resources Canada.

Resolute is contributing $3.5 million and hosting the pilot project at its Thunder Bay pulp and paper mill. TMP-Bio is a patented technology developed by FPInnovations with financial support from Natural Resources Canada's Transformative Technologies Program.

Resolute Forest Products emphasizes that it is committed to transforming itself into a more sustainable organization. The company plans to continue to focus on its wood products, pulp and tissue operations, and keep pace with structurallydeclining paper demand, while positioning itself for the longterm evolution of the paper and forest products industry, including bio products.