Europe’s sixth largest tissue producer has realized its dream of entering the US market with its Circleville, Ohio, facility.

“We will be a leader,” CEO Luigi Lazzareschi promised at the opening ceremonies.

A dream was realized in Circleville, Ohio, recently when Sofidel opened its first greenfield mill in North America.

It comes 20 years after the Italian-based company opened its first mill outside Italy, in France. It is now the sixth largest tissue producer worldwide.

Sofidel Group CEO Luigi Lazzareschi had studied in the US in his student days, and after establishing Sofidel as a tissue power in Europe, he had long wanted to become a player in the vast US market. As he said at the opening ceremonies, “The US is a country that welcomes and supports the projects of ambitious people.”

He added that the company will follow its existing business model and leverage on the three factors it has always believed in: innovative technology, proximity to markets, and sustainability.

Sofidel first gained a toehold in the US when it purchased the Cellynne assets in Florida, Wisconsin, and Nevada in 2012, but the long-term goal was always to have a major presence in the rapidly-developing North American private label and away-from-home (AfH) tissue sector.

The company’s next steps were to boost its presence in the US by opening a new converting lant in Oklahoma and upgrading the former Cellynne converting facility in Nevada.

In 2015, the company bought Green Bay Converting, including a site in Mississippi to house a new converting operation. But the bigger news was still to come later that year. Working with SelectUSA—a program that supports foreign investments in the US—Sofidel opted to build an integrated (tissue making and converting) greenfield mill in Circleville after first considering a brownfield site in the eastern US. It also opened its US headquarters in Philadelphia, PA. 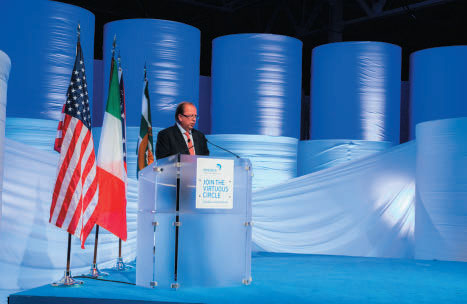 “The US is a country that welcomes and supports the projects of ambitious people,” said Sofidel Group CEO Luigi Lazzareschi.

Originally slated to house one tissue machine, in 2016 Lazzareschi surprised delegates at RISI’s North American forest products outlook conference in San Diego when he announced the purchase of a second Valmet Advantage NTT200 HS tissue machine for Circleville. This machine started up days after the official opening of the $400-million mill in October 2018.

Construction in Circleville began in 2016. The first converting line started in February 2018, while the first tissue machine came online in late spring of that year. Still in the ramp-up phase during the opening, nevertheless, the machine is running very well, according to Sofidel. The plant is Sofidel’s largest integrated facility, covering 1.8 million ft2 and stretching a mile long. It is also its most technically advanced.

Eventually, the mill will employ 700 people. The first 300 came from varying backgrounds, most with no pulp and paper experience. However, there were industries in the area, some of which had closed, so Sofidel was able to hire people with what it calls an “industrial mentality.”

The University of Miami (Ohio) has a paper science program and Sofidel did hire some graduate engineers. “We are very satisfied with our people,” Lazzareschi noted. “They have not been difficult to train and they have potential to grow within the group, not just at this mill.”

ALL VIRGIN PULP, ALL CERTIFIED

At peak capacity, the mill will be able to produce about 130,000 tpy of tissue from the two machines. They can produce conventional or higher quality textured products (i.e., increased bulk and softness). The machines can run at 1,800 m/min in textured mode or 2,000 m/min in conventional mode. Sofidel believes the machines will produce quality close to that of a TAD machine, but at a lower cost.

At first, the mill will produce paper towel, bathroom tissue, and napkins. They will have two to four plies, depending on the finished product. The US market prefers one or two-ply products compared with the European preference for two- to four-ply.

The converting hall is also Sofidel’s largest, covering 430,000 ft2. There are 10 converting lines of which Fabio Perini supplied six. Plans call for five more lines to be installed.

Besides the Constellation units, Perini also supplied a Time rewinder and Myline equipment, Casmatic packaging machines including Perini’s A6T technology, and CMW3000 technology. All lines were designed to be flexible and can produce a full range of bathroom tissue and kitchen towel products. The advanced reeling technology preserves softness while ensuring uniform sheet separation from start to finish of each roll.

There are two folding machines, one each for facial and towel, with a napkin folder on its way. The converting operation can handle 130,000 tpy of tissue. It was all designed to maximize efficiency and produce high quality products.

A fully automated palletizing/storage system is supplied by Elettric80 (E80). It is the first system of its type that E80 has supplied in the US and the largest integrated plant the company has done.

E80’s scope of supply included parent roll handling. Elephant roll clamp laser-guided vehicles (LGV) manage rolls from pick-up at paper machine to delivery to the specified rewinders in the converting area. The rolls are delivered to the parent roll warehouse and stacked on two levels by LGV. All roll data and warehouse operations are managed by E80’s proprietary software called Smart Decision Maker (SDM). SDM is the decision making brain that drives all automation.

There are multiple models of LGV to convey finished goods. Quad four position barges and forked LGV perform transport missions from palletizers to off-line stretch wrappers and deliver products to the Smart Store high density warehouse from the production area.

All product movements are managed by E80’s SDM software.

E80 forked LGV deliver raw materials from the warehouse to the entire converting complex. This includes deliveries of corrugated to case packers and other materials needed by the converting and packaging equipment.

Finally, E80 supplied the Smart Store high-density finished goods warehouse. This is a rack supported structure that is entirely designed and built by E80. It is seven levels high and holds 56,000 pallet positions. Smart Store receives finished pallets via the LGV system from the converting area. Smart Store also executes shipping orders based on the priorities and amounts passed from Sofidel’s ERP down to E80’s SDM. The warehouse logic is managed by SDM, the same decision making software that manages the entire logistics automation chain throughout the site. The system can load 6,000 pallets in 12 hours.

The fully automated high-bay storage is designed to ensure high quality of the finished goods and keep workers safe.

Sofidel is very proud of its environmental record (Tissue360°, No. 2 2018, p. 20). One of its guiding operating principles is: “Less is more.” The Sofidel group total average water consumption is 7.1 L/kg of tissue compared with the industry average of 20-25 L/kg.

The Circleville mill has co-generation. Heat generated by the turbines is recovered and used to supply thermal energy to dry the tissue and then recycled to produce steam through a set of special suction hoods. 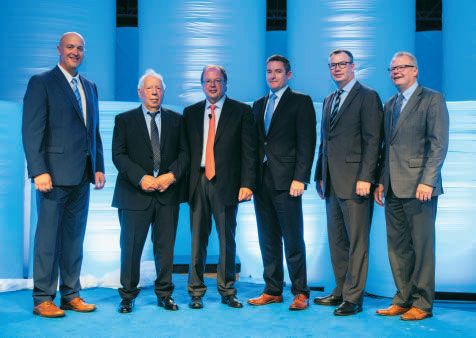 On the consulting side, BHM Ingenieure (Austria) was contracted as the “owner´s engineer” by Sofidel America. It was the company’s first project in the US, notes Managing Director Peter Oksakowski. “Due to the fact that BHM has already performed services for many projects in other foreign countries, we knew that it is important to learn about construction and construction methods in the US,” Oksakowski says.

BHM also provided the architectural and structural detail design for both tissue machines, the co-generation plants and wastewater and fresh water treatment plant, as well as the slab on grade for the high bay storage.

PRIVATE LABEL, AFH ARE THE PRIORITIES

Speaking with journalists after the official opening, Lazzareschi said Sofidel plans to focus on the private label market in the US and not introduce its European brands to this side of the ocean.

The other sector where Sofidel is intent on growing is the away from home (AfH) market. Still, Lazzareschi said the majority of Circleville’s production will be private label as it is becoming more and more important.

To properly serve the growing private label market in the US, Lazzareschi believes eight to 10 large operations are still needed. He added that the company’s investment in Inola, OK, slated to open in 2020, will be similar to Circleville (two tissue machines), although with a smaller capacity, 120,000 tpy. The layout of the buildings and square footage will be about the same. Work at Inola began in March 2018.

Covering 280 acres, the Circleville site can house three more machines, but these are not in the company’s plans yet as it has other priorities. Lazzareschi admits that at some time in the future, the company will have to invest in a TAD machine and it will probably be installed in Circleville.

The other “priorities” he spoke about included expanding Sofidel’s reach in the US. Another interesting area for Sofidel could be the Pacific Northwest.

He added that a lot of product was being shipped from east of the Rockies into the Pacific Northwest. And, the Chinese producers were also serving the area. But, with tariffs and the threat of a US/China trade war, Lazzareschi asked if a “rethink” will happen. This could open the door to new machines being built in the US.

How will Sofidel win new business in the US? With high quality and attractive prices, Lazzareschi said. “Our US assets are stronger than many competitors’. That is, they are bigger and newer. Thus, we have state-of-the-art quality and lower operating costs.

“In the future, double digit growth is expected in the US, but only single digit in Europe. In the medium- to long-term we will need to look at new sites or acquisitions in the US.”

He added that Sofidel plans no new greenfield mills in Europe in that span.

In closing, Lazzareschi said that he believes investments such as Sofidel’s will “change production in the US. The market had been concentrated in a few hands. Now, private label is growing and you have to be competitive. There will need to be an effort to renew assets.”

He concluded by saying, only half jokingly,” Our investment will make a fortune for machinery producers.”

This article first appeared in the Spring/Summer 2019 issue of Tissue360o. Graeme Rodden is editor of Tissue360o, an official publication of TAPPI. TAPPI is the leading association for the worldwide pulp, paper, packaging, tissue and converting industries.