Drones have great potential in mills; benefits include safety, efficiency, and cost—and they’re fun to use.

During Valmet’s recent Tissue Talks virtual event, viewers had a glimpse of the potential for drones inside a mill. Drones have been in use in the industry, but mostly for exterior uses such as woodland or woodyard supervision.

In his presentation “High-flying multi-tool keeps the production environment safe and clean,” Paul Arnold, manager, tissue solutions, Southern Europe, Middle East and Africa, showed how drones could be used inside a mill.

While the paper focused more on cleaning, as dust is a particular hazard in tissue mills, Arnold then spoke at length with Tissue360° to demonstrate the far-reaching potential of drones, although he stresses that there is still a lot of development to be done.

For Valmet, the genesis of the idea began three years ago when it wanted to do a commercial video of one of its pulp bale dewiring installations. As it was totally enclosed, a drone was brought in to take an aerial video. “When we started,” Arnold says, “we saw that it was all covered by dust.”

However, the enterprising drone “pilot” said he could remove the dust. He did it in less than five minutes through the air displaced by the drone’s propellers. “We were impressed,” Arnold adds. The manager of the converting line saw what had happened and asked if the same could be done in his area. Usually, cleaning took two people eight hours and they had to use a manlift and a vacuum. The drone did the job in 10 minutes.

The mill then asked Valmet if a drone adapted to industrial use could be developed. Arnold says the first goal was to see how to eliminate dust deposits on hard to access places such as cable trays, beams, and ducting.

In a tissue mill, dust is a serious hazard and can cause sheet breaks, contamination of finished goods and carries a high risk of fire. Accessibility is often a challenge even with a manlift. 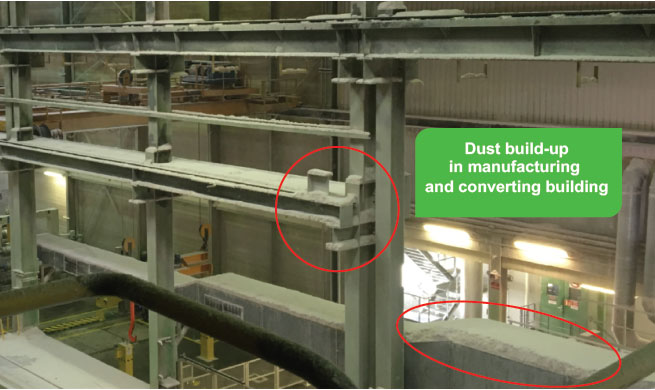 Typically, cleaning is done every week in a converting line and every three months in a machine building. And, this means shutting down.

The interior industrial environment is very challenging for a drone. First, there are many places/things into which the drone may crash.

Adding to that issue, GPS do not work indoors, hampering stability. Dust prevents floor sensors, which measure the distance between the floor and the drone, from working. Therefore, these two tools cannot be used to control a drone.

Finally, Arnold says, “Safety standards were not meant for drones so we had to figure out how to get reliable controls. We had to answer the question: What happens if something goes wrong?”

Safety issues are important and they are all incorporated based on customer specifications. Redundant controls are also built in.

Of course, these drones are not what you would find in your local hobby store. The industrial drones need special construction. Valmet has found two partner companies in France. One specializes in drone manufacturing. The other is industrial service oriented and has worked for GPS networks and the French utility.

The drones are encased in a carbon fiber cage to protect them. As Arnold says, there are infinite possibilities to damage a duct, piping, cable tray or other structures, not to mention damaging the drone itself.

There are two types of customers, he says. One class wants continuous blowing. The main objective here is eliminating any dust accumulation, thus reducing the risk of fire. Here, a drone equipped with a bloweris sufficient.

For others, the solution must be a vacuum. Some dust accumulation is acceptable. This type of drone would be equipped with a long suction channel connected to a dust collection bin on the floor. This is a development for which Arnold is optimistic a prototype will be available next year.

In both cases, he says the drone is operated by an operator; the task is not subcontracted.

He adds that the “thrill”of flying a drone as part of the job has great appeal.

There has already been a long list of tissue producers that have tested drones: Kimberly-Clark, Sofidel, Essity, Wepa. And some customers have placed repeat orders for drone service.

Most trials have taken place in France, but Valmet is now going further afield with its offer of trials. Drone rental is also a possibility. It comes with a 70-hour training course.

Drones do the job. They can reach and clean places where no simple cleaning procedures were possible. Drones are fast, but sometimes not fast enough. For some, Arnold adds, there is room for improvement, e.g., a faster cleaningtime. “We are looking at what we can clean faster; for example, in two or four hours, not eight. There is potential for improvement.”

Summing up, Arnold says drones are flexible, able to “reach the unreachable,” can mitigate risks compared with alternatives, and are fun to use.

For IR sensors, Arnold says drones can fly over the mill floor, scan and analyze the material resting on the floor, e.g., phosphates, nitrates. He adds that this is a very specialized application.

Other sensors can measure moisture in the building and can create humidity mapping of a building’s environment.

With more and more automated storage in a mill, drones can fly by pallets, read bar codes and feed the information into a spreadsheet for inventory control.

The amount of data that could be gathered is immense, especially as the technological aspects of the drones are improved and their capabilities increased.

For stability, Arnold mentions placing radio frequency tags inside the building to help fly the drone in the proper place. The ultimate goal is self-operated drones. He hopes these will be available next year.

As noted, the principle of a suction device attached to a collection container on the floor is still under development, but a working model should be available in 2021.

The development of special robots is a class apart. Based on a demand from customers, Arnold envisions them performing special tasks such as travelling on cable trays to see if there are any hot spots.

The robot is autonomous from the drone, but the potential exists to use them together. The software solution to link a dust blowing drone with a self-operated floor vacuum cleaner exists, but has not been implemented yet, “But, it is still in our books,” he says.

Looking further ahead, Arnold sees the day when fully automated drones will be available. He notes that the big cost now is the pilot.

“When an autonomous drone is available, it will change the picture,” he states. “Building and piping issues such as leaks can be discovered by drones. Drones can save time, improve safety and, in the end, reduce costs and improve efficiency.”

This article first appeared in the FALL/WINTER 2020 issue of Tissue360o.
Graeme Rodden is senior editor, North and South America, for Paper360°, an official publication of TAPPI. TAPPI is the leading association for the worldwide pulp, paper, packaging, tissue and converting industries.