How do you reduce greenhouse gas emissions (GHG) by 10%, water consumption by 1.9 million litres and the consumption of natural gas by 17.8 million m3, while producing 5.5 GW.h of additional electricity?

Domtar has managed to achieve all of these environmental milestones at its Windsor mill with a $30.3M investment under the Pulp and Paper Green Transformation Program. Here's how.

Four projects were completed as part of this investment:

The biomass boiler uses bark from the mill, and it was modified to increase its capacity from 134 t to 160 t, an increase of 15%. The boiler was optimized to burn construction materials or tire chips when needed. Improving our facilities allows us to burn almost all of our biosolids instead of burying a part," said Michel Lemieux, the mill's Director of Technical Services.

- Reduction of natural gas consumption by 17 million m3, equivalent to an emission reduction of 6721 tons of CO2 per year (-7% of total mill GHG) 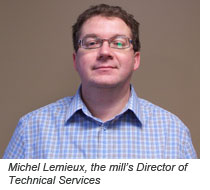 A steam box was installed on the two paper machines in the press section, which increased the dryness of the sheet and allowed for better control of the moisture profile. This installation reduced steam consumption. "We also replaced our old screening system with perforated baskets, for a system with slotted baskets. This investment has allowed us to reduce breakages, remove more contaminants and will increase the proportion of recycled fibre from 30 to 50% in some of our products, "said Lemieux.

- Savings of 28 kg of steam per ton of paper produced, equivalent to savings of 1683 tons of CO2 per year

- Ability to produce a greater proportion of recycled paper

Two steam turbines were replaced by electric motors in order to redirect the steam produced for energy production. "Initially, electric motors consume more energy, but the additional steam supplied allows us to produce 1.6 MW more, the equivalent of 16,000 100-watt bulbs," said Lemieux. The energy produced is sold to Hydro-Quebec, and then Domtar buys electricity according to its needs.

- Production of 1.6 MW of additional electricity in addition to the 25 MW already produced, made from renewable energy.

In the black liquor production system, Domtar installed droplets eliminators in the evaporators to produce a cleaner condensate that can be reused in the showers of brown stock washers that require very hot water. "As the condensate is hot, we no longer need to heat water for washing the pulp and we save energy," said Lemieux. The condensate surplus is reused within the mill to reduce water and steam consumption. 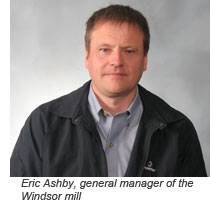 ccording to Eric Ashby, general manager of the Windsor mill, the $ 30.3 million was invested efficiently. From an environmental, economic and social perspective, "it's always about continuous improvement. We worked hard to reduce our environmental footprint and meet the needs of our customers, reduce costs and demonstrate our commitment to the community. "

With these projects, the Domtar Windsor mill forecasts a 10% reduction of its GHG emissions, the equivalent of pulling 2,350 cars off the road. The mill now uses 1.9 million m3 less water, or 7% of its total water consumption. The mill estimates it will reduce its natural gas consumption by 17.8 million m3, equivalent to 11% of Montreal residential consumption in one year. Biomass consumption is expected to fall by 30,000 tons per year and the mill will annually produce 5.5 GW.h more electricity.

In 2009, the Government of Canada launched the Pulp and Paper Green Transformation Program to allow pulp and paper companies that produce black liquor (byproduct of the pulping process), to improve energy efficiency, their ability to produce renewable energy and the overall environmental performance of their facilities. A fund of one billion dollars has been allocated to this program, which expires onMarch 31, 2012.