Grooving suction rolls is a commonly undertaken process. Here are answers to some of the most frequently asked questions.

Why groove the suction press roll? 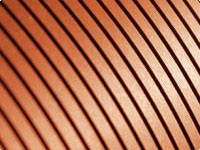 There are a number of reasons why suction rolls are sometimes grooved. First, grooving provides knuckles of high pressure, which are thought by some to aid in the transfer of water from the sheet to the felt under the action of the pressure in the nip. Just as the suction roll provides a shorter path for the water to go before it reaches an area of no or low pressure, the grooving of that suction roll shortens those paths for water transfer even more.

Grooving a suction roll cover provides a more compliant surface to the cover, which compensates for irregularities in the web, the felt and the mating roll. It is for this reason that grooving is often used on suction pressure rolls for Yankee dryers.

When harder covers are used, the grooving will compensate somewhat for the inability of the harder cover to conform properly to the mating roll. This is the reason many urethane covers are grooved. At this time urethane is limited in its hardness to 30 P&J or less.

In some cases grooving of a suction roll cover has eliminated or minimized shadow marks. Shadow marking is generally considered to be the result of flow patterns set up in the sheet. When a change in cover is used as part of the remedy for shadow marking the cover is softened. This lowers the pressure in the nip and increases the time to go from zero pressure outside the nip to maximum pressure near the centerline of the nip. This cuts down on the velocity of water flow in the nip and thus does not reorient the fibers. Grooving the drilled cover breaks up the pattern of flow so that fiber orientation does not occur.

Shadow marking often becomes unacceptable as the cover thickness is decreased by grinding. When this happens, if grooving is resorted to, it is sometimes possible to get one or two more grinds out of an existing cover before recovering.

How does grooving affect the cover's P&J?

Let's start the answer for this question by looking at a plain undrilled roll and considering PSI in the nip as the major factor. Drilling the plain roll with the usual 20% open area will increase the nip width at a given load and consequently decrease the pressure calculated on the total nip width by about 20%.

If one considers only the bearing surface in the nip, the average pressure is actually increased by about 5% by drilling. If that drilled roll has its surface further manipulated by grooving with the usual 8 per inch groove pattern using .020" wide grooves, there will be little effect on the nip width, since the bulk modulus of the cover will not change much due to the surface grooving. The land area will be decreased to the extent that the pressure on the lands will now be about 25% higher than it was on the lands of the suction roll as it was drilled and not grooved.

All of this has occurred on the same cover with the same rubber at the same hardness. In the rubber industry hardness is considered to be resistance to indentation. The P&J plastometer is a device which measures the indentation of a 1/8" diameter ball into the surface of the rubber under a load of one kilogram. Trying to position the ball of the P&J instrument on a drilled roll so that it is equidistant from any of the holes is a difficult enough task. If we are dealing with a drilled and grooved cover, it becomes almost impossible to get reproducible results because of the difficulties in accurately positioning the ball.

This means that the answer to the question concerning the effect on P&J is that:

Not surprisingly we are reluctant to calculate roll cover engineering data on the basis of P&J's on drilled covers.

P&J readings are specified on undrilled covers and are the means of determining the modulus of the cover. The bulk modulus referred to above is the modulus of the cover as a whole. Not only the P&J but the drilling patterns and open areas are used as input in the computer programs used to calculate pressures, nip residence times and other nip related quantities.

In those cases - and these are not numerous where grooved drilled rolls are used routinely - the P&J specified on the undrilled cover is less than that usually specified for similar rolls in the same application. Such specification changes evolved because better water removal was obtained without sheet marking and were not a conscious attempt to match P&J's or nip widths.

Any concerns or drawbacks with grooving a suction roll?

Grooving a suction roll decreases the surface area available for bearing the load imposed by the nip. It is easy to see that this increases the amount of abrasion borne by this decreased area. When the cover is grooved, in addition to being drilled, the area is further decreased. It also becomes discontinuous to the extent that the little pillars which support the load are free to move or squirm in the nip, which increases the wear rate.

Chemical attack on covers is dependent on a number of things, only one of which is compatibility of the cover and the chemicals. Another factor in the rate of chemical attack is the surface-to-volume ratio. Suction rolls have a higher surface to absorb the chemicals because of the drilling, but at the same time usually run cooler than plain or undrilled rolls. Chemical effect is less at lower, rather than at higher, temperatures. This results in a standoff: the increased surface-to-volume ratio being balanced by temperature. Grooving the drilled roll further increases the surface-to-volume ratio and can tilt the balance so that chemical resistance can become a very real problem.