Online analyzers and advanced process controls (APCs) have combined to establish stability in pulping and recovery cycle operations which, in turn, have allowed favorable shifting of operating targets, promoting higher quality and productivity and lower material and energy consumption. However, as a secondary benefit, these fast-responding and very visible measurements and controls have been valuable diagnostics tools, uncovering previously unseen process instabilities and limitations. The previous veil over the process has been lifted. With this visible information, mill engineers and vendors have been working together to solve these problems and provide additional benefits.

This has been the case at the Navigator Company’s Cacia mill in Portugal, which has an annual output of about 370,000 tons of bleached eucalyptus pulp, intended for processing into specialty papers such as high quality décor, filter, cigarette, and tissue paper. Earlier in 2018, Valmet commissioned a multi-point online Recovery Liquor Analyzer and Causticizing Optimizer APC in the causticizing plant. The controls and operator interface are based on Valmet DNA linked to an existing DCS.

Previously, under manual control, the liquor conversion process and white liquor quality were difficult for operators to manage and optimize, since the transport delays in the process are long and manual samples infrequent. The result of the project has been stability in the whole process from green to white liquor, consistently higher causticizing efficiency, more stable white liquor with a higher active alkali, and other operational benefits.

Moreover, the mill staff and Valmet have worked together to diagnose some previously unseen process limitations which, when solved with planned improvements, are expected to lead to further benefits and more return on investment.

Fernando Martins, recovery plant manager, summarizes the reasons behind the investment decision and progress made so far, after a few months of operation experience: "We planned to get better white liquor quality to the pulp mill, stabilized causticizing efficiency and sulphur and alkali indices, plus lime and natural gas reduction."

To achieve these goals he sees an advantage in Valmet’s comprehensive approach where analytical instrumentation, controls, and operator interface are in one supplier package. "We made a reference visit to a mill where we saw the exceptional results they had with this solution. It was the only equipment on the market where we could see such good results," he concludes. He also notes that the project team "talked in the same language as the operators," thus promoting a successful outcome.

"As for the final results, we haven’t made the final calculation yet since the equipment has been working for only a few months—but as a first impression, we are going in the right direction to achieve the targets. At the moment, the white liquor control is much more stable and all the other (liquor and chemical control) targets are achieved," he says. 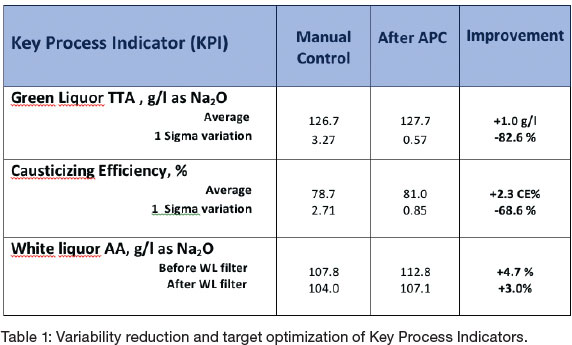 STABILITY FROM GREEN TO WHITE LIQUOR

The optimization controls are based on six online liquor measurements—from the dissolving tank to the final white liquor—which are made by a Valmet Recovery Liquor Analyzer. Once the green liquor is stabilized and the strength maximized, the control of the slaker is the most critical in the chemical conversion process since it sets the initial reaction rate, which then carries through to the causticizing vessels and the final white liquor. The ratio of lime to green liquor is determined by the rise in temperature from the green liquor to the top of the slaker, which is created by the exothermic reaction. This model is used when the slaker is not boiling. If it is boiling, another strategy is automatically activated. Feedback white liquor measurements made downstream supervise the final outcome. 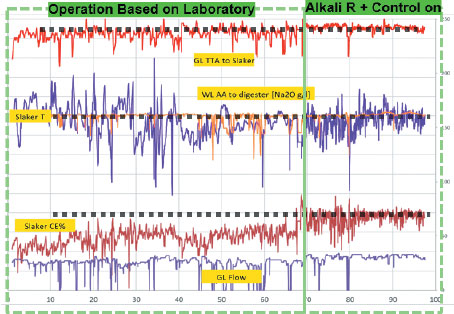 The online measurements and advanced control stabilized the whole chemical conversion process and allowed target shifting of key process indicators (Table 1). Figure 1 shows the improved stability. Most notably, causticizing efficiency increased by 2.3 percent (from 78.7 to 81.0 percent) and active alkali in the white liquor is up by 3 percent (104 to 107.12 g Na2O/l).

With higher white liquor strength one would expect a lower volume of liquor to the digester, but that is not the case because of a limitation discovered during the project. Francisco Figueiredo, process engineer, explains: "We have noticed some reduction in liquor to wood ratio, but not yet as much as we want. But that is due to overdilution in the white liquor filter, which was made visible by the analyzer. Before this analyzer, we did not have this visibility." Once this is corrected, the full value of the improved liquor strength should be realized.

With improved stability, overliming has been eliminated. Figueiredo adds, "I don’t remember any overliming since the system implementation. We can schedule filter washes with a lower frequency. Ideally we should wash it only during planned outages, and we are reaching this target. The washes are not very frequent and not urgent because of plugging now; it is now a predictive maintenance routine."

By all accounts, the project was a success; however, the improvements in the process will not end with the acceptance of performance guarantees. Proposed modifications, which include green liquor cooling and lime feed improvements, were discovered during the course of the project and recommended by Heikki Imelainen, Valmet’s senior application engineer. Once more, the improved process visibility with the new system played a role in problem and solution definition.

Imelainen explains the project implementation philosophy that led to this discovery. "We study the whole process when we tune any APC at the site, and not only the area under control, but also all input materials and the process after the last control point," he says. "At Cacia I recommended these two improvements and operational benefits. Slaker boiling is a safety issue and when it is boiling too much we have to decrease the lime feed, which decreases white liquor quality. Without boiling, the slaker is easier to control. On the other hand, the improvements in lime feeding will stabilize the addition of makeup lime and have a positive effect on white liquor quality."

Once these improvements are made the control of the slaking operation should lead to better stability and more benefits. Moreover, solving the overdilution problem in the white liquor filter will allow the mill to realize full value for the increase in white liquor strength.

Mark Williamson is a journalist engineer based in Ontario, Canada. Contact him at: This email address is being protected from spambots. You need JavaScript enabled to view it..