The pulp and paper industry is a complex industry, including various mills, processes, and production outcomes.

Generally, approximately a third of the capital cost in the chemical pulp mill is related to power generation and chemical recovery of a mill. One of the primary process parts in the chemical recovery is the evaporation process, where the water is evaporated from the black liquor to increase the dry content from approximately 10 % to 85%. The higher the dry solid content in the black liquor, the more efficiently it can incinerate in the recovery boiler.

However, like all parts of the pulp and paper mills, evaporators too can have operating issues. One of the main challenges is the scaling/fouling of the structure inside the evaporator, that causes production and output losses and decreases evaporators’ energy efficiency, capacity, and lifetime. On the other hand, cleaning requires production stops, thus causing production losses, increases in labour, water, energy, and chemical consumption. These production losses cost paper mills thousands of dollars per hour during production shutdowns, which is significantly more extensive in pulp production. 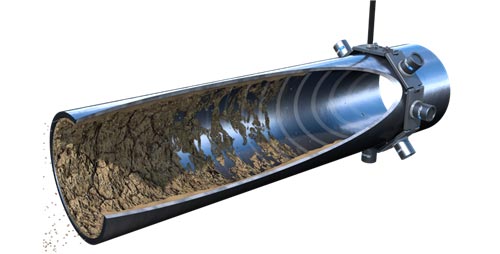 This article introduces software-guided high-power ultrasound technology as a novel solution which is being used to help pulp and paper mills globally to prevent fouling in evaporators, decrease the need for mechanical cleaning and chemical flushing, as well as increase its capacity, efficiency, and operating time.

Specifically, this article presents case studies on how two pulp and paper mills are preventing scaling/fouling in evaporators with software-guided power ultrasound and the practical benefits of this approach.

Prevention of scaling/fouling issues in evaporators

Currently, fouling in evaporators is removed with chemical washes or with mechanical cleaning. When the amount of fouling increases to such a critical level that the evaporators cannot run at a sufficient level, the evaporator must be stopped and cleaned. The most common mechanical cleaning method is high-pressure washing, with a cleaning sequence that goes from weekly to one to twice a month, depending on the process conditions.

Power ultrasound, on the other hand, is a unique fouling cleaning method that removes the need for constant chemical and mechanical wash, as well as production shutdowns. The technique is known for its cleaning properties and effective removal of mineral and organic fouling from metal surfaces. When the power is combined with the right external mechanical attachment, it is possible to apply the software-guided power ultrasound directly inside the process equipment, without the need to open and dismantle the equipment or stop the production process.

The first case started in spring 2017 in a Finnish pulp mill that annually produces around 300,000 tonnes of semi-chemical pulp. The mill had been struggling for a many years with fouling issues in their seven tubular black liquor evaporators. Previously, when calcium-based fouling build-up reached a critical level, the individual evaporator would be taken out of the production line and cleaned via high-pressure washing on average twice per month.

When it comes to the evaporation process itself, as seen in the diagram below, the process starts at the evaporator number six and proceeds across the production line, one evaporator at a time. As the temperature of the process increases, the water is evaporated from the thin black liquor, thus increasing its viscosity and its dry material content from 10% to 50%. Therefore, resulting in fouling issues across the production line, especially at the hottest evaporators 1A and 1B, thus clogging the tubes inside the evaporators. 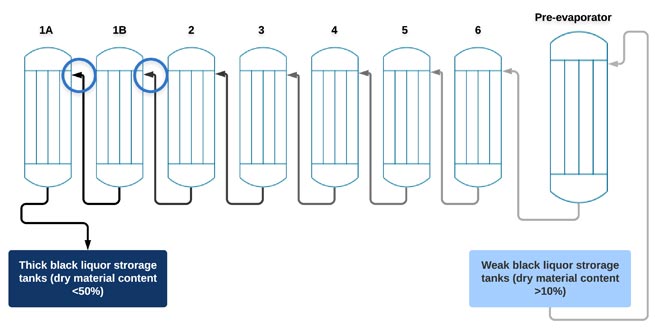 The fouling prevention mechanism by power ultrasound mainly relies on crystallization of the liquid under certain conditions. This is called sonocrystallization, which enhances the calcium-based fouling crystallization within the process liquid itself without being bothered by other external influences such as a temperature or pH difference.

Sonocrystallization contributes to the formation of smaller crystals through rapid nucleation and fragmentation, which are usually triggered by different physical and chemical factors. This makes crystals less prone to sticking to equipment surfaces or heated surfaces and therefore preventing the evaporators' tubes from getting fouled and clogged.

Since the permanent installation of the power ultrasound solution, the mill has been able to keep the evaporators clean, and the need for mechanical cleaning has decreased from 24 times a year to only once per year.

The second case started in 2019 in a South-African pulp mill that produces annually 200,000 tonnes of semi-chemical pulp. The mill has three effect evaporators that are connected in series. The evaporators use steam to evaporate water from the process liquid to increase dry material content to over 50% in the red liquor. The steam circulates from the first effect to second and fourth effects, and finally into the condenser.

The evaporators get fouled by the red liquor, and the efficiency drop occurs mainly due to the fouling/scaling in the evaporators’ tubes. Usually the first effect, the hottest one, is the most fouled. When the fouling reaches a critical level, the overall heat transfer efficiency and KPI (a measure of the amount of water evaporated versus live-steam pressure) drops, and the mill needs to stop the production and wash all the evaporators every month.

Similar to the previous case, the power ultrasound solution is installed externally to the first effect to prevent the fouling from accumulating to the evaporator’s inner tubes. During a month and a half, the power ultrasound solution has increased the effects’ operation by 18 days and the evaporation rate has increased by 3 t/h. Additionally, the energy efficiency in the first effect increased by 57% and also the second effect’s energy efficiency increased by 39%.

As seen in the case studies presented in this article, software-guided power ultrasound technology is now being used as a proven approach that can help pulp and paper mills globally to get rid of scaling/fouling in evaporators. In addition to preventing fouling from happening the mills are also getting production and financial gains as they can produce much more efficiently and significantly reduce costs related to the constant maintenance breaks on evaporators. 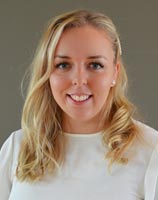 Beda Arponen is an Account Manager at Altum Technologies. She is a M.Sc. (Econ. & B.A) in international business and manages several customer projects across the pulp and paper industry in Europe, America, and Africa. You can reach her at This email address is being protected from spambots. You need JavaScript enabled to view it.