Some of the best young minds in Quebec were recognized at the annual Forces AVENIR awards gala celebrating student achievements that balance academic excellence with a commitment to socially conscious, active and responsible citizenship.

For over 10 years, Resolute has been partnering with Forces AVENIR to support two of its programs: The Élève Persévérant for students of the Saguenay−Lac-Saint-Jean and Côte-Nord regions at the secondary level, and the Personality – Graduates program for Quebec students at the masters and doctoral level.

Ilrick Duhamel, a PhD industrial engineering student at Polytechnique Montréal won this year’s Graduate award having ably balanced success in his studies with personal and social achievements, as well as by showing leadership in his field of study.

During his undergrad, Ilrick saw the importance of the human factor in engineering and later studied the role of social sciences in engineering for his masters. A strong communicator, his work was repeatedly recognized by several academic distinctions, led to an internship at Le Soleil newspaper in Québec City and helped him start a podcast that served as a platform for engineering professors and researchers to discuss the importance of learning from other disciplines such as humanities.

His work sends a message to the next generation of engineers to get involved in their community and to develop the social competencies that will have a positive impact on society.

A gifted athlete, Ilrick represented Canada at the multisport world championships in Spain where he earned a bronze in the duathlon (running and cycling). He is currently ranked 30th in the world for winter triathlon (snow running, speed skating and cross-country skiing).

Ilrick has brought his love of sport to his studies by developing and racing on a bike whose frame is constructed of laminated ash wood. He’s been racing on that frame for three years now.

Resolute’s director of forestry Étienne Vézina was on hand to present the award. Ilrick told the gala audience that he was inspired by the evening and to see all the different ways students have distinguished themselves. More than just a word, he remarked, “excellence is an objective all of us can aspire to.” 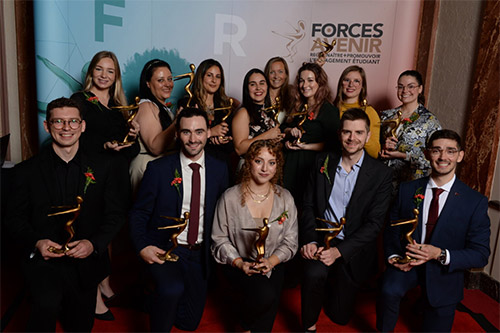 It’s a sentiment that underlies the importance of the Forces AVENIR award programs themselves.

“By recognizing and rewarding commitment and perseverance in our students,” explains the organization’s president and CEO, François Grégoire, “these awards encourage good citizenship and promote a culture of collective engagement that will benefit future generations.”

Currently, 17 universities and more than 120 high schools in Quebec participate in the Forces AVENIR award programs. Resolute is proud to support the strong commitment and academic excellence of all the students who took part in these programs and to congratulate this year’s winners.