The COVID-19 pandemic, which is currently rampant in the world, is sparing few businesses. CelluForce, the world leader in the development and commercial production of Cellulose Nanocrystals (CNC), an advanced new biomaterial produced from wood, has been impacted as well.

However, the company has adapted to the crisis by developing a viable solution to the shortage of gelling agents used in the production of hand sanitizers and disinfectant products.

CelluForce is a Canadian based producer of CNC marketed under its CelluForce NCC® brand. Made of small nano-scale cellulose crystals derived from wood pulp, CelluForce NCC® is produced as powder or liquid suspension. CelluForce NCC® has unique properties that enable its use across a range of industrial sectors to improve product performance.

From the outset of the pandemic, Canada has experienced a shortage of gelling agents used to thicken hand sanitizers which makes them easy to apply. Upon becoming aware of the supply issue, CelluForce President and CEO, Sebastien Corbeil, wondered if it would be possible to extend the gelling properties of CNC used in oil and gas well applications to hand sanitizers.

The idea quickly developed within the CelluForce team and with the help of several local partners, the company was able to engage Canadian producers of hydroalcoholic gels to offer CelluForce NCC® as an alternative to the commonly used carbomer type gelling agent. With great customer uptake and interest, testing and development was completed at the CelluForce Technical Centre to tweak CelluForce NCC® properties for use in this application. Within 4 weeks, the team had come up with a new gel formulation containing Celluforce NCC®, the creation of a technical usage guide and the generation of the first commercial orders.

CelluForce also had to make quick changes in manufacturing and logistics at its production plant to increase production of a pre-dispersed liquid form of CNC to help customers integrate the product in their existing lines.

CelluForce NCC® is rapidly gaining traction as a gelling agent with many benefits. It is an innovative Canadian product, both natural and biodegradable unlike carbomers which are imported and derived from petroleum. Further, in addition to providing excellent gelling properties, CelluForce NCC® uses cellulose that is recognized as a skin protection agent.

Today, 5 Canadian companies have integrated Celluforce NCC® into their disinfectant gel, and CelluForce is working with a robust pipeline of more than 20 new customers to validate the use of Celluforce NCC® as a gelling agent in their applications. Sales are brisk and growing at tens of thousands of litres per week.

‘The crisis of the pandemic created a new opportunity for CelluForce that looks to have promise well into the future. Much of our business development has been focused outside of Canada, and we have been very pleased to work with Canadian partners. “I am very proud of the efforts of our team, suppliers, and customers to rapidly develop this application to aid in the battle against the corona virus”, said Sebastien Corbeil. 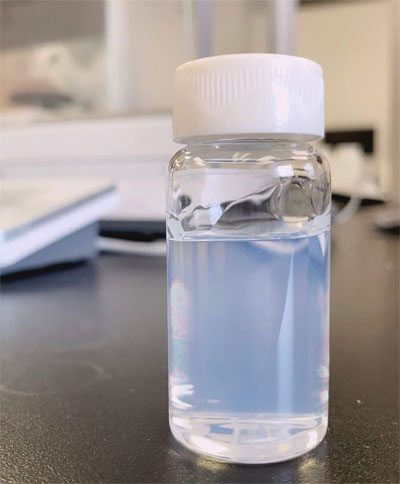