Strong words. But are they true? Not as far as Canada is concerned (and probably the US too).

For a Vancouver-based group, Canopy is alarmingly ignorant of the packaging facts in Canada. Here’s one. Most of the paper packaging material made by Canadian mills is 100% recycled content!  It’s not made (as Canopy claims) with the “habitat of endangered species such as orangutans or caribou.” It’s made from old used boxes collected from the back of Canadian factories and supermarkets; from offices; and from Canadian homes. And has been for years, including in Vancouver. So no, it doesn’t have a “crushing footprint” on the world’s forests, biodiversity and climate.

The tiny amount of virgin fibre that is used to make paper packaging in Canada doesn’t come from “ancient” forests either, in the normal sense of that word. To most people, “ancient” means old, as in very old. In fact, Canada’s forests are relatively young, mostly between 41 and 120. And since Canopy mentions the Canadian boreal, guess what percentage of its trees is over 200 years old? Yep, a mere one (1) per cent. Check out the data from the National Forest Inventory. Branding the Canadian boreal as ‘‘ancient” is misleading and exaggerated. 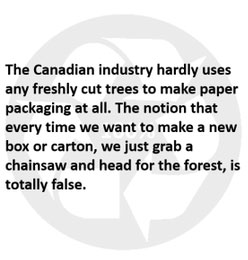 Canopy talks about trees “disappear(ing) into packaging” but it conveniently fails to mention the other side of the ledger: that new trees are planted to regenerate the forest. This is provincial law in Canada. Logged areas must be successfully regenerated after harvest, either by natural or artificial means (planting and seeding). In Canada, this averages more than a thousand new seedlings a minute, or 615 million a year. It balances what is harvested.

And far from “leaving a trail of deforestation” (as Canopy claims), the paper packaging industry in Canada is not responsible for any of it. The major cause of deforestation in Canada is not forestry, it’s conversion of forest land to agriculture, and has been for years. Canopy knows this, or at least has been told so numerous times.https://www.ppec-paper.com/wp-content/uploads/2019/10/MostCanadianPackaging.png 632w" sizes="(max-width: 300px) 100vw, 300px" width="300" height="291">

Canopy also leaves the impression that pizza and shipping boxes are simply used once and thrown away. In fact, corrugated box recovery in Canada is estimated to be at least 85 per cent. In one province, Ontario, the residential Blue Box system sends an amazing 98% of the corrugated boxes that end up in the home, on for recycling. This provides a continuous recycling loop that maximizes the use of paper fibre, creating a circular economy.

There’s a lesson here for brand owners everywhere. We commend you for committing to environmental causes. But please, please do not allow yourselves to be publicly embarrassed by lending your names and credibility to the false and misleading claims such as Canopy makes above. Facts do matter.