Nova Scotia might have the country’s highest diversion rate as a province (44%) but British Columbians recycle more as individuals. 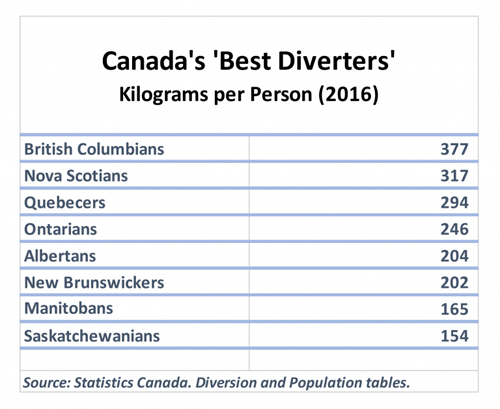 There are some interesting differences between Canada’s two waste diversion leaders. Nova Scotia’s population is quite concentrated within a relatively small area compared to British Columbia, which would seem to give the waste diversion advantage to Nova Scotia. BC’s recycling results, on the other hand, are spread more broadly and thus less reliant on major tonnage diversion coming from just one or two material streams.

For example, while paper and organics are the major material streams diverted in each province, there’s a marked difference in their relative contribution to the provincial total. In British Columbia, paper recycling and organics diversion represent about one-third of the total each. But in Nova Scotia, organics recovery alone is responsible for over half (53%) of the province’s resulting diversion. Without that substantial diversion of organics, Nova Scotia would slip down the provincial rankings.

The data thus indicate opportunities for improvement as well: for BC to boost its organics diversion (it’s currently ranked third behind Nova Scotia and New Brunswick in organics diversion per person) and for Nova Scotia to focus more attention on collecting materials other than organics (for example, it’s ranked sixth out of the eight reporting provinces in diverting paper).

Of course, better data, particularly on the industrial, commercial and institutional (IC & I) side would help. We believe that the diversion of paper in Nova Scotia is significantly higher than the Statistics Canada numbers indicate. 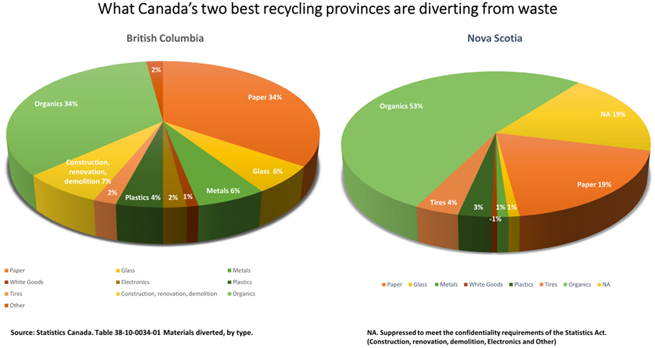 (This is the latest in a series of recent blogs on waste and recycling data in Canada. Here are the links to the others:  Good news and bad news in dumping of waste (October 11, 2018); Where’s the garbage coming from? More and more from homes (February 19, 2019); Canada’s waste diversion rate slowly inches higher ( (February 28, 2019).