Canadians are dumping slightly more waste than they did back in 2002, but because there are more of us around today, what we dump per person has fallen almost eight per cent since then. So there is good news and bad news in our analysis of StatsCan's latest waste disposal numbers. 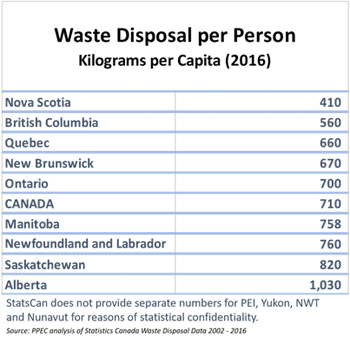 The data measures the disposal of industrial, commercial, and residential streams of paper, plastic, glass, metals, textiles, organics (food), electronics, white goods such as fridges and appliances, and construction, renovation and demolition (CRD) materials like wood, drywall, doors, windows, and wiring. It excludes materials from land clearing, and asphalt, concrete, bricks, and clean sand or gravel.

Canadians dumped 24.9 million tonnes of waste in 2016, down from a peak of 26.4 million tonnes in 2006, but almost 4% more than in 2002. On a per capita basis, given the 12% increase in the number of Canadians over the period, we have improved as waste dumpers from 770 kilograms per person down to 710 kilograms per person. The stats are based on weight and we don't know to what extent more and lighter weight plastics might be a factor in this result.

Nova Scotia continues its long track record of being the province dumping the least. Its latest per capita rate is 410 kilograms per person, hardly changed from 2002, with the next best performer being British Columbia at 560 kgs/capita. A bunch of provinces follow (Quebec at 660, New Brunswick at 670, Ontario at 700, Manitoba at 758, Newfoundland and Labrador at 760, and Saskatchewan at 820 kgs/person). Bringing up the tail end is Alberta, the only province over one tonne per person, at 1030 kgs/capita.

Quebec, BC and Ontario have recorded the most improvement over the period (down 16, 15 and 13% respectively). The Alberta and New Brunswick per capita trend is in the opposite direction (up 12% and 22% between 2002 and 2016).

Where's the waste coming from? See our next blog on trends in waste from industrial and residential sources.