The recovery rate of Ontario's residential Blue Box system has slipped again, to its lowest level since 2005. According to Stewardship Ontario, the 2017 recovery rate was 61.3 per cent, down almost two per cent on the previous year. The provincial target is 60 per cent. 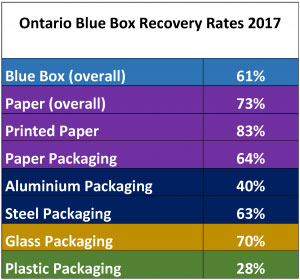 Almost three-quarters of what's currently being recovered is paper of one kind or another, the same as it was back in 2003 when industry "stewards" (brand owners and retailers) became legally obligated to co-fund the Blue Box system. Printed paper (newspapers, magazines and catalogues, telephone books and printing and writing paper) has the highest recovery rate overall (83 per cent) followed by glass packaging (70 per cent) with paper packaging at 64 per cent and steel packaging at 63 per cent.

Paper and aluminum packaging are the only material groupings whose recovery rates have either stayed at the same level or improved in every specific category since 2003, with corrugated boxes again being the recovery leader overall in 2017 at an impressive 98 per cent.

The glass recovery rate has dropped significantly from 2015 but the Blue Box laggards continue to be aluminum and plastics packaging at 40 per cent and 28 per cent recovery respectively. Plastics packaging now represents 44 per cent of what ends up going to disposal (on a weight basis). It's also by far the most expensive material to recover. The net cost of recovering plastic film, for example, is listed at $2,848 a tonne, and plastic laminates at $2,897 a tonne. The Blue Box average net cost is $307 a tonne.