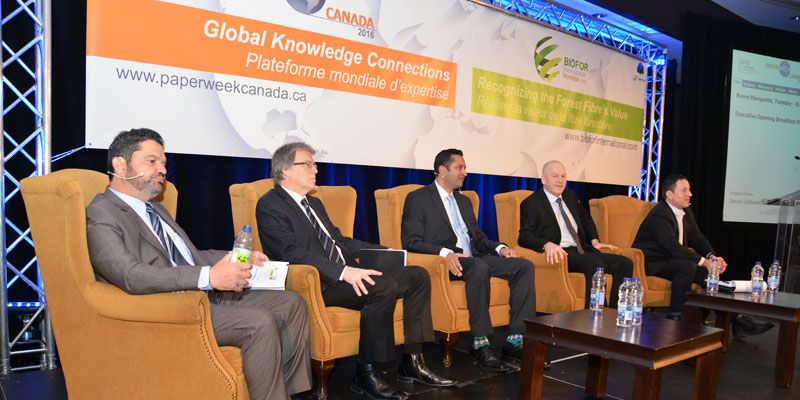 Attendees in Montréal were told how close some products are to commercialization. Others will take more time.

PAPTAC made a significant and bold change in course in February this year when its annual meeting in Montréal featured the BIOFOR International bio-product and bio-refining conference in parallel with the traditional PaperWeek Canada pulp and paper technical agenda. To put these diverse conferences on an equal footing is a sign of the times as bio-products and bio-refining are regarded as the fiber industry's future. It may be a technology of the future, however, its present is just as exciting, as conference attendees were told how close some products are to reaching their commercial potential. There were a number of announcements about upcoming trials and some real results. But they are the tip of the iceberg since there is much work to be done on these and other less advanced applications and the time lines may be long, as emphasized by some presenters.

The conference's kickoff session was a panel discussion of various and diverse bio-product initiatives in the Canadian industry. Rod Albers of West Fraser Timber, says, "The key to a profitable bio-product is that it has to have a strong wood products business as its base." That is wood products from West Fraser's sawmills. "We are looking for bolt-on processes and near-commercial technology that add value and synergy to our existing processes," he adds. Current initiatives include electricity generation sold to the grid from Rankin cycle heat recovery and bio-methane projects, activated carbon and lignin-based products from the LignoForce lignin extraction process developed by FPInnovations. That 30 t/d scaled-up process is now being commissioned and going through "water runs" at the Hinton, Alberta kraft pulp mill. West Fraser plans to use the product initially as a plywood adhesive, but other external applications are possible. 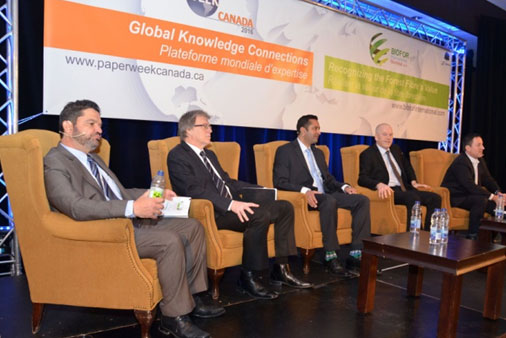 BIOFOR panel discussed bio-product successes and initiatives. Photo source: Paper Advance
Gurminder Minhas of Performance BioFilaments, a joint venture of Resolute Forest Products and Mercer International, described the application development of cellulose filaments (CF) now being produced at a 5 t/d demonstration plant at Kruger's Trois Rivières mill. Through functional modification he says that that CF is a "very adaptable product" with applications in fiber-reinforced composites, concrete, paints and coatings. Automobile parts are a particular application that he singles out as manufacturers are looking at lightweighting their vehicles to boost gasoline mileage.

Robert Graham of Ensyn presented his company's commercial Renewable Fuel Oil (RFO) process which turns residual forest biomass into a liquid bio-hydrocarbon. He describes the patented rapid thermal processing (RTP) process as being "very simple, with no catalysts or hydrogen." The liquid product, now being produced at its 11.3 million litre/y Renfrew, Ontario plant, is a substitute for heating fuel oil and is being demonstrated as a co-processing feedstock at oil refineries for gasoline and diesel fuels. A hospital in New Hampshire has now converted its heating systems entirely to RFO, thereby replacing traditional fuel oil. RFO's use as a potential refinery drop-in fuel is awaiting USA approval for toxicity and emissions testing. Ensyn has formed a joint venture with Fibria to build a bio-fuel plant at the Aracruz mill in Brazil. Fibria also has an equity position in Ensyn.

Bruno Marcoccia of Domtar described the company's "bio portfolio" approach in which various initiatives with different investment potentials, time lines and risks are being evaluated. The company is transforming itself from a primary pulp and paper producer into an innovative fiber company.

Bio-products may be become "a new pillar" in their operations. Domtar has invested in demonstration plants for cellulose nanocrystals (Celluforce's CNC) at its Windsor, Québec mill and a Valmet LignoBoost lignin extraction plant at the Plymouth, North Carolina mill. Other recent and ongoing projects include "ultra-high performance" softwood kraft pulp with superior paper strengthening power at its Dryden, Ontario mill and dried lignin powders at its Windsor, Québec mill that could be used in thermoplastic compounding.

Later in the week Sébastien Corbeil, CelluForce's President and CEO, put to rest the industry's curiosity about what has been happening with the fledgling biotechnology company when he announced that significant commercial trials using the company's cellulose nanocrystals will happen later this year. It has not been easy for the company, as it faced a critical cash flow wall in 2013 and was facing the dreaded "valley of death" encountered by many start-up companies that miss the mark. Then along came a white knight investor in Schlumberger, the world's largest provider of oil and gas drilling services, who saw the economic potential of CNC as a viscosity modifier for drilling fluids. The companies have formed a consortium to develop this application and test it later this year. Papermachine wet end chemistry is another application of CNC that will be tested online later this year with the partnership of a chemical supplier. 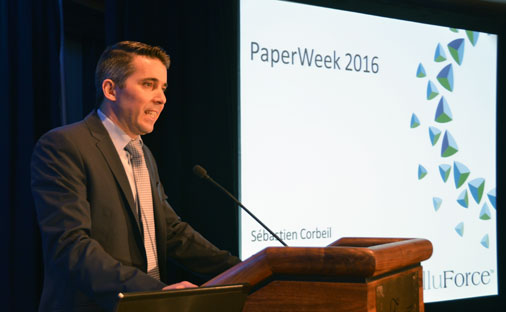 Sébastien Corbeil of CelluForce. Photo source: Paper Advance
Corbeil says that they have learned lessons about how long it takes to introduce new products, understanding customers' risk tolerance and some strategic blocking by adversaries. He explains that understanding the target niche submarkets is key. "We have now adopted a leaner start-up model in line with customer expectations. We have trimmed down and focused on our tier 1 applications." In addition to oil drilling and papermaking these include adhesives, cement, resins, rubbers, composites , enhanced polymers, paints and coatings. With the potential of these applications CelluForce hopes to sell the full capacity of 300 t/y by 2018.

Balázs Tolnai of Kruger updated the trial performance of its FiloCell trademarked cellulose filaments in papermaking applications. To date, there have been 30 trials in publication papers, specialty grades and tissue. CF's wet and dry strength enhancing and lightweighting potential have been demonstrated. Tolnai says that CF provides much more than better average strength as the uniformity of strength has improved, resulting in a sheet that is less prone to breaking at the weakest points. Two thousand rolls of CF-enhanced publication paper were produced on a production machine and tested in a print run. The results in the pressroom were astounding as press break frequency was reduced by 60% at the same average sheet strength.

CF has been tested as a concrete additive at the University of Sherbrooke. At low dosages the flexural strength of concrete doubled. CF has shown its capability to modify liquid cement rheology so it is easier to pump to the top of high buildings under construction. 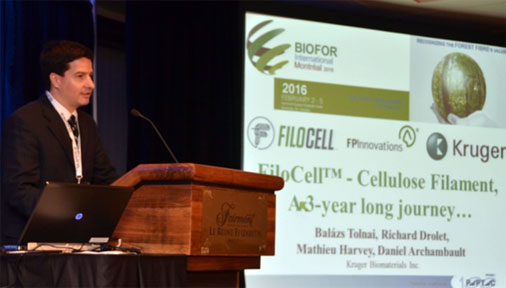 Armand Langlois of Enerlab, made a strong case for using 20% to 25% iso-lignin, as they call it, as a component in polyurethane foams, thereby displacing some petroleum-based polyols. Iso-lignin is produced by catalytically reacting dried lignin with isocyanate. Lignin also offers a cost reduction potential, he says. Presently, the foams are produced on a pilot line, but production of foam panels is expected later this year.

Since the introduction of bio-products into non-traditional markets often has a long time line and comes with some risks, the conference agenda also included sessions on R&D efforts in Canada, engineering, project management and risk mitigation of new technology scale-ups. Project financing opportunities and risks were also discussed.

Finally, a senior Canadian government official made a pledge to the industry in which she said that the new government elected last fall would support resource development and clean technology and commit to climate change mitigation. It's a comprehensive promise, for sure, but good for the industry on several levels.