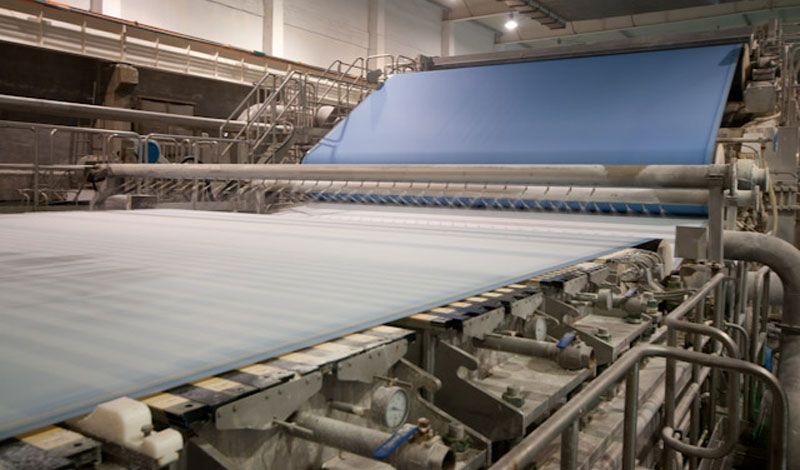 Current wet end controls could be extended to include stock preparation and the sheet forming process, with feedback from many more online measurements and laboratory functional tests.

Paper machine wet end multi-variable controls and applications that also integrate feedback controls from the dry end scanner are well proven and have provided some impressive benefits. In fact, they are so well establish that process control suppliers commission their multi-variable model control as a mainstream product. These controls provide wet end stability that carries through the papermaking process.

A pipe dream or a step forward?

However, there is much more that could be done to extend today's multi-variable controls. More dimensions could be added to the controls by including the furnish preparation and sheet forming processes where many paper properties are developed. By combining the management of these processes many additional wet end and dry end measurements could be used. These include fiber properties, fines levels, freeness, on-wire drainage, sheet formation, porosity and other dry sheet measurements. Conceivably one could add wet sheet moisture and sheet release from press rolls to the control matrix, since they are affected by wet end conditions as well. Furthermore, by extending the controlled variables to include laboratory quality tests, even more dimensions could be added to a comprehensive overall strategy.

Extending current multi-variable controls to a multi-dimensional model would be a step forward for the science of papermaking. As we know, adjusting chemistry and retention by additive flows affects a host of related variables. Similarly, many sheet properties and runnability are affected by the furnish preparation and sheet forming processes. All told, it's often difficult to find the best operating point, or window as papermakers call it.

Are these more extensive multi-dimensional controls in the cards, or are they just a pipe dream for now?

There are already documented cases which prove the interrelationships between manipulated and controlled variables beyond the effect that retention aids and electrochemistry have on fiber and filler retention. For instance, drainage is affected by freeness, cationic charge demand and chemical addition rate. Furthermore, sheet formation is influenced by a variety of forming zone conditions including fluid-dynamics, fiber properties and coagulating and flocculating chemical additions.

In addition, it is known that charge demand affects the release point or release angle on press center rolls, the stability of which affects sheet runnability. Says one experienced European papermaker, "Running over 1500 m/min and with lower grammage, the operating window is very narrow and the draws are critical." Controls which help papermakers stay in that narrow window are most welcome and produce a good ROI. 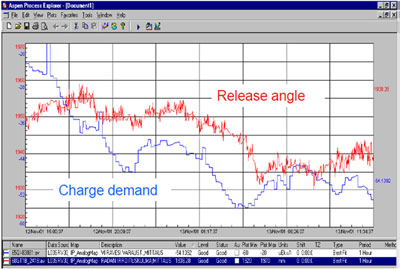 Figure 1: The release angle on a center press roll is affected by furnish charge demand. A similar relationship between charge and wet press sheet moisture is also documented. 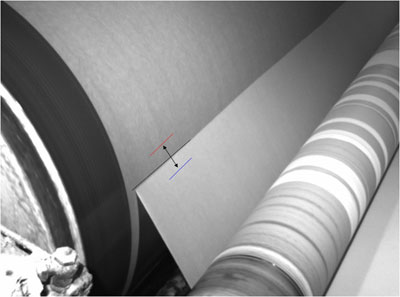 Figure 2: The sheet release point can be continously monitored by a web image analysis system. Why not calibrate this release point by pixel mapping and link this real-time measurement to an automated control in a QCS or DCS? The camera image is courtesy of Metso.

Paper sheet forming and physical property development are also influenced strongly by fiber refining. Online freeness analyzers are well accepted measurements which papermakers use to determine the specific refining energy required, and that is often controlled automatically. The next logical step is to extend the scope of that control to include regulation of papermaking indicators of drainage or even measured paper properties, either online or from the laboratory. Figure 3 illustrates how a linerboard machine online furnish freeness measurement affects couch vacuum, dryer pressure and also influences board strength tests - Mullen and STFI compression tests.

This type of real-time analysis points out the strengths of information processing which is available in DCS or IT systems. Time synchronized readings of many different papermaking variables can be compared and a multi-dimensional response and interaction model can be built up. 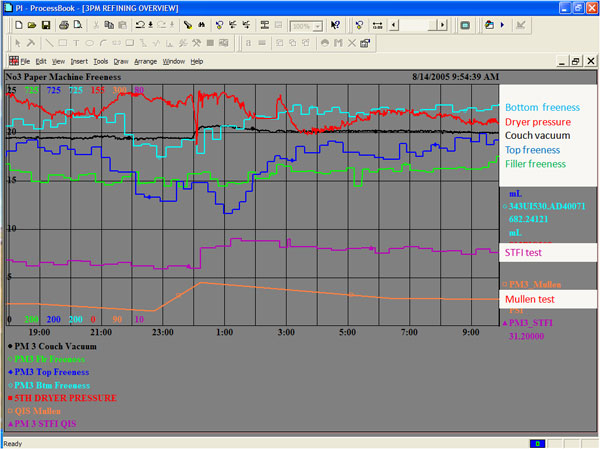 Papermakers are already manually controlling fiber properties to achieve end-use sheet tests. For instance, an SC paper producer manages CD-tear and porosity, measured every reel by an automated test lab, so they are both within an optimum window.

Sometimes operators must deal with process responses which affect paper web quality tests in conflicting ways when a change in operating point is made. Now and then, a compromise is called for whereby one variable is prioritized while another is kept within constraining limits. Control engineers have the means to do that with the software tools they have.

Process automation systems can emulate the best operating practices and perform them repeatedly, so there is an argument in favor of automation as means to achieve that optimum operating point consistently, regardless of operator experience. Consistency is a virtue in papermaking which we know is a 24/7 operation.

Knowledge of wet end process chemistry allows papermakers to run at the right balance point where sheet additives are most effective and are not wasted. In one example, shown in Figure 4, a linerboard producer determined that, after a certain optimum wet strength agent dosage level is reached, any additional dosage becomes ineffective because charged reactive sites on the fibers have become saturated. The mill staff concluded that charge measurements can be used to achieve better wet strength properties at lower chemical doses. A model that relates sheet additive amounts and costs, electrochemistry and sheet property tests would be a good candidate for multi-dimensional controls. 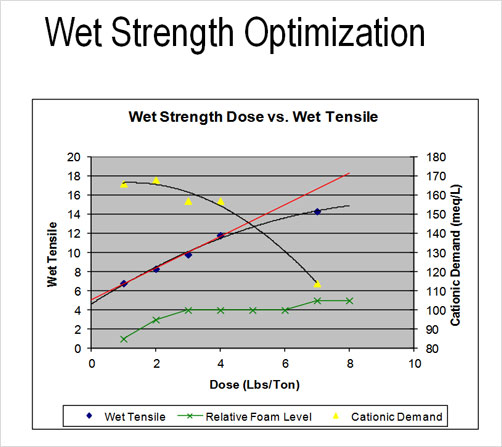 Waiting to be exploited

Many of the measurements required for a multi-dimensional control model already exist and are well proven. Fiber dimensions and freeness are now sampled online and those properties influence the forming and drainage process. Retention is well measured and controlled now, but the next step may be to control drainage as well. (Have you noticed how many new drainage measurements have been announced recently?) Electrochemistry is an established measurement but how well is its control potential realized? Formation can be measured at the wet end and dry end and the range of dry end sheet measurements is increasing. And let's not forget about automated laboratory measurements that are made after every reel turn-up.

IT systems are another powerful ingredient since they can link all of this data that are gathered at different times with different update cycles. However, process control systems are good at recognizing time lags and making appropriate control adjustments.

The extra dimensions of a multi-dimensional model are waiting to be exploited. Some positive signs are emerging. For instance, one QCS supplier has published a technical paper showing how a multi-variable controller can manage and stabilize retention, drainage and sheet formation while achieving a profit motive. The goal was to increase ash content in the sheet without sacrificing quality and produce a return on investment. That goal was achieved.

For multi-variable control to be extended beyond the present boundaries the justification and the profit motive must be well calculated by papermakers and demonstrated by automation suppliers. Most importantly, there must be a profit model to go along with the control model.

Imagine controlling a paper machine process from the stock prep to the reel in order to meet all customer specs with minimum production cost and maximum runnability. That's the ideal goal of papermaking controls, and there is a substantial economic benefit associated with that achievement. However, that's a rather broad and unfocused objective, so this all-encompassing approach may be too much to bite off all at once. A more focused, stepwise and results-centred approach may have the best chance of success .

Furthermore, suppliers must be able to show that this type of control can be economically sustained over the long run. Papermaking processes do change and the controls must change with them to sustain the best results.

It's an opportunity, but is it a pipe dream for now? Time will tell.