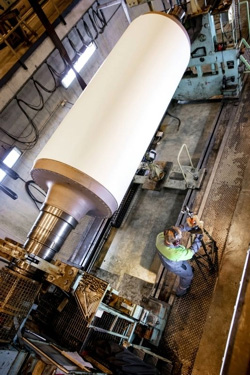 Roll balancing is the manipulation of the center of gravity so that it falls along the axis around which it must revolve. If this condition does not exist, unbalance results and the axis will tend to rotate about the center of gravity, with the journals tracing some circular orbit. The resultant unbalanced forces are detrimental to the rolls involved and to the associated machine elements. In most rolls, balance exists at some points along the roll face and not at others. If the roll is rigid and short, the unbalanced points will be carried by adjacent balanced or counterbalanced points and smooth operation will result.

Static balance
If the roll supported without friction will remain at rest whenever the rotation is stopped, all the local irregularities are self-compensating and static balance exists. If the roll is not static balanced, sufficient weight is added to the "light" side to bring it into balance. This is usually done by drilling a hole and adding weights prior to covering. Static balance is a simple adjustment and would suffice if forces of rotation did not interfere.

Dynamic balance
Although the roll as a unit is statically balanced, it is possible that one end of the roll may have an eccentric center of gravity if correction has been applied to the opposite end. This cannot be detected by simple static balance, but it will become noticeable when the roll speed is increased. The resulting oscillation is known as dynamic unbalance or couple or moment unbalance. This produces an end-for-end motion and requires investigation to determine which end, or both, require counterweighting. It is probable that each end will require its own peculiar counterbalance, with the sum of the two again producing static balance. Simple static balance will be satisfactory if the roll is short and operates below 70 percent of resonant speed or 800 surface feet per minute.

Dynamic balance can be accomplished by adjusting the center of gravity of both ends of the roll. The local unbalanced points in the roll are then carried with no external vibration if the roll is a rigid body.

Whip
In the process of making a straight roll out of a curved pipe, or any piece of pipe that is curved or bent, the walls will vary in thickness along the face of the roll as well as around the circumference. When this roll is statically and dynamically unbalanced and at speed, local conflicts in balance along the face appear, with the heavy spots in the shell being slung further from the center. As soon as the shape of the roll is deformed by its own weight irregularities, the resulting condition is called whip or kinetic unbalance.

To determine the complex underlying causes of whip requires a painstaking approach and provisions for its correction made early in the balancing operation. Theoretically, individual correction in every plane wherein unbalance exists is needed. This is impossible, but it can be approached by tentatively locating all counterweights at or near the nodes which are approximately at the roll quarter points. It is likely that additional weight will have to be located at intermediate points and the initial weights adjusted to bring about acceptable balance.

How balancing is done 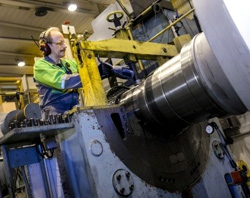 The determination of corrective measures for fast running rolls can be time consuming even for an experienced operator. The time for diagnosis and the time required to install the proper counterweights should not be underestimated.

After the location and magnitudes of the counterweights have been calculated, their secure attachment may require additional time. A flexible roll, for instance, may require drillings in the heads to remove weights or drillings through the heads to insert weights. If it is the roll body, holes must be drilled through the shell for bolting or plug-welding the internal weights in place. This too is time consuming and requires considerable ingenuity.

Due to the nature of roll coverings, the roll core should be balanced before covering. After a roll has been covered it is difficult to attach counterweights securely within the shell. Fine balancing, if necessary, can be done after covering if only small amounts of weight have to be added or subtracted on the ends. However, it is sometimes necessary to plug a rubber or composite cover if balancing is required after a roll is covered.

The roll is one part of a balance system
Every portion of a rotating system has an effect on its balance. For this reason, balancing ideally should be done in the machine where the roll is to run. Obviously this cannot often be done. It is advisable with all rolls, and necessary with larger and heavier rolls, to balance the rolls with bearing assemblies.

After the roll has been finished and it is straight and round, the fine balance can be accomplished if necessary. Small changes can be made on the roll ends with weights.

Measurement of and specification for balance 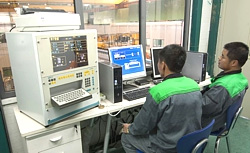 Dynamic unbalance may be expressed in "ounce-inches" and is the measure of one or more forces which result in vibration at the ends of the roll for a given speed. The amplitude of such vibration is normally measured by a recording vibrometer.

For rolls on which dynamic balance is not specified, the Rubber Manufacturers' Association industry suggests maximum amplitude is .005" at the ends of the roll for a given speed.

Rolls requiring closer tolerance should be finally balanced in their permanent position, since the following factors will influence the dynamic balance:

Roll balance is influenced by face length and core construction and is due to the deflection of a roll when rotated at a given speed. This deflection is measured at the center of the roll face while the roll is turning at the specific speed. It is especially important that deflection be corrected before covering the roll.