At the heart of the typical suction roll, hidden within layers of steel, lies the internal bearing. One of the most sensitive components of the roll, it is not only difficult to maintain, but also the least forgiving when it fails.

This diagram shows the drive side bearing acting as the locating bearing for the suction roll assembly. The shell expands as the machine starts and the shell comes up to temperature and moves toward the tending side of the machine.

The suction box in this example has a front vacuum assembly, i.e. the box is located from the front, and expands toward the drive side of the machine.

An internal bearing failure can be catastrophic, resulting in hours of downtime costing thousands of dollars. Most likely, the failure will also cause major damage to the suction roll's interior and exterior.

Although a relatively small and inexpensive part, the internal bearing is critical. It supports the weight of the roll's interior, and enables it to remain stationary while the outside shell rotates around it at high speed. Though the cost and time associated with internal bearing failure makes it a primary maintenance concern, a direct inspection of the bearing is impossible without shutting down the machine and taking the entire roll apart. 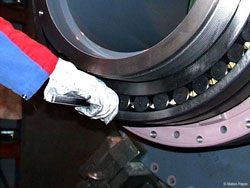 Most mills inspect a suction roll annually, and many replace the internal bearing as part of the inspection regardless of its condition due to its relatively low cost. While regular replacement is prudent, a false sense of security may develop if adequate steps are not taken to accurately monitor and maintain the bearing.

Even if a mill follows OEM instructions, replaces the bearing annually and properly lubricates it, there is no guarantee the bearing will last a year. There is always a margin for error. The internal bearing may have been improperly assembled or mounted. Lubrication problems and water contamination can also occur.

Routine monitoring provides early detection of possible bearing failure. Years ago, a suction roll's internal and external bearings were monitored with a stethoscope, coupled with an engineer's experience and intuition. In time, this crude method was replaced by sophisticated vibration analysis devices, useful for monitoring the external bearings. However, because of its location at the roll's center, the internal bearing has remained difficult to monitor with these external devices due to resulting interference, which obscures the true reading. Thermocouples, which monitor temperature change, also are not entirely reliable. They can sense a temperature change that may indicate a problem exists, but not the problem's nature or severity. 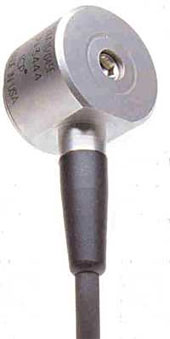 An accelerometer is a transducer installed near a suction box's internal bearing. It senses changes in motion, including vibration. A cable from the transducer to the outside of the roll can connect to the mill's master computer control system, or provide a link at the front of the roll for a portable computer. It gives the mill operator the ability to identify bearing-related problems in seconds. With routine checks, an operator can monitor the internal bearing and detect a problem before the bearing fails.

An accelerometer can be installed on new equipment or to an existing roll while it is down for annual inspection. Once a routine monitoring system is in place, an equally critical task is to ensure proper lubrication.

Paper mills use accelerometers to accurately and precisely monitor vital bearings, such as the internal bearing on a suction roll. These bearings are difficult to reliably check by other means because of their location and accessibility.

The accelerometer measures acceleration by giving an electrical signal proportional to the object it is mounted on. The direction-sensitive instrument is equipped with a piezo-electrical element and a weight. When the instrument is subjected to acceleration, the weight's mass imparts pressure on the crystal, thereby producing a charge. Each side of the crystal takes a different charge. These charges are converted into a voltage signal for output.

An analyst plots the signal on a frequency domain data table and notes any frequencies related to possible faults. Each fault generates its own signature identified by specific frequencies. Then a judgment is made on the severity of the problem based on the frequency's amplitude and harmonics. The amplitude of the vibration typically increases as a problem becomes more severe.

An internal bearing can fail quickly if routine lubrication is neglected. Often, OEM recommended guidelines for proper lubrication tend to be tempered according to a mill's history and experience, and demands made by the operating environment and production. However, care must be taken to avoid over or under lubrication and water contamination. 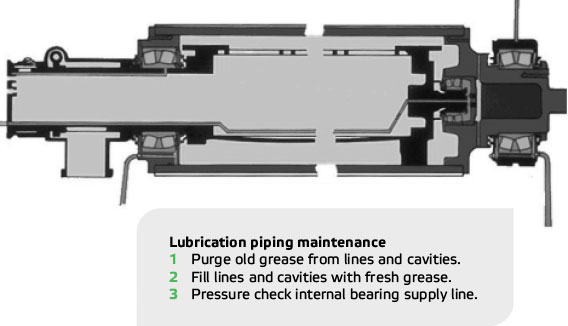 The stainless-steel lube line runs from the front of the roll through the suction box to the rear internal bearing. Most maintenance routines suggest pumping grease through the line when overhauling a suction roll to ensure clean lubricant reaches the internal bearing. This helps prevent old grease from hardening in the line, where it can cause high-pressure build-up that may rupture the line. This is also an ideal time to check for cracks or rust in the lube line.

In addition to routine inspections, many mills replace the lube line once a year. As with the internal bearing, damage is hard to detect and a new lube line has a nominal cost.