It's hard to imagine how successful drying techniques would be today without the spoiler bar. It is based on the premise that the thermal resistance of the dryer's condensate layer can be reduced by fitting axial bars, or "spoiler bars" on the inside of the dryer shell. 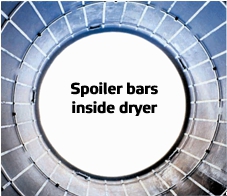 The bars generate turbulence in the condensate layer, and enhance heat transfer during high-speed operation.

The spoiler bar plays an integral role in the drying process. In fact, it is proved to increase productivity by improving drying capacity up to 30 percent, and offering unsurpassed drying uniformity and the potential for cross-machine moisture profile control.

Dryer performance and the ability to transfer heat is dependent on the movement or behavior of the water within the dryer. At low speeds, condensate rests in a puddle at the bottom of the cylinder causing steam to condense on the inside wall.

As speed increases, "cascading" occurs as a layer of the condensate falls to the cylinder's bottom. This is usually accompanied by large-scale turbulence, which provides good heat transfer. 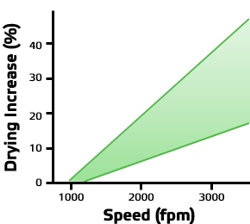 But how much heat transfer can be expected from spoiler bars? The answer to this is usually found in data of the machine's actual running conditions with and without the spoiler bars present. As a general forecast, The figure shows the range of drying increases possible. The lower line represents a machine with a low external heat transfer coefficient similar to board or corrugating medium grade sheet, with poor pocket ventilation. The upper line represents a machine with a high external heat transfer coefficient, such as a fine grade machine with good pocket ventilation.

Standard on most dryers, spoiler bars added to existing machines can produce remarkable results. However, despite their benefits, spoiler bars do have their limitations. For example, to increase speed, spoiler bars should only be applied to dryers that are steam pressure limited due to steam header limits or steam system design limitations. Also, spoiler bars shouldn't be used on dryers of machines that restrict steam pressure due to the sheet's low tolerance to higher temperatures. Spoiler bars are also not applied to the bottom dryers of a serpentine felted section since the bottom dryers do not contribute to drying.

Spoiler bars also can improve the sheet moisture profile. One proven method is to apply partial length bars designed to cover only the wettest portion of the sheet. This method improves drying only where required, and allows the wetter portions of the sheet to catch up with the dryer portion, thus producing a leveling effect.

The preferred location of profiling dryers is in the maximum drying rate area of the machine – usually mid-machine in the main steam group that is running at the highest pressure. Felted dryers are preferred with the highest possible wrap. Dryers with adequate pocket ventilation are also required for maximum effectiveness.

The full impact of the spoiler bar on drying performance can be seen in data collected from a kraft bag machine installation. Mechanical spring-hoop design spoiler bars were installed in 30 out of 34 of the machine's dryers. Four of the bars were partial length for profiling. Prior to the bars' installation, the machine ran 30# - 50# kraft bag at speeds of 1900 to 2400 fpm (580 to 730 mpm).

Tests taken before and after the spoiler bar installation with equal grade and speed run, showed a significant drop in steam pressure from 60 to 34 psi, indicating a 23% increase in heat transfer. At the same time, condensing load measurements indicated a 7% decrease in steam usage.