ATLANTA - As 2022 comes to an end, Georgia-Pacific has launched or completed approximately $1.8 billion in capital improvement projects throughout the company.

Projects include new facilities and additions as well as improvements to existing operations. These investments lead to productivity and income opportunities for local contractors who help complete the projects, stimulating each facility location's economy. 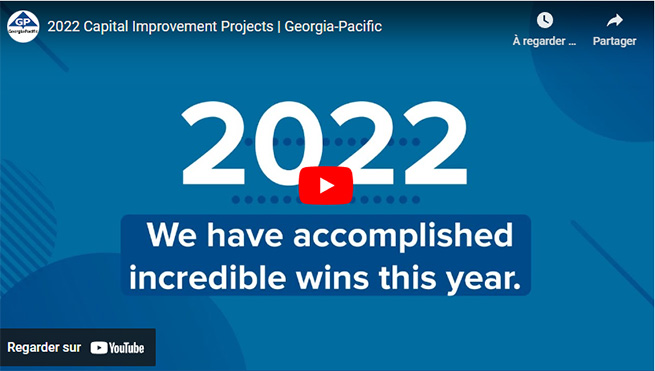 Georgia-Pacific completed a $7 million upgrade that modernized the Diboll lumber mill in Texas and helped increase its overall production. The project focused on the mill's boiler reliability, maintenance and rebuilding two drying kilns. While the kilns' purpose is to dry the lumber and remove moisture from the wood, the boiler plays a critical role in lumber production. Often referred to as the heart of a mill, the boiler heats water to make steam, which powers various systems within the mill.

"Our kilns were built in the early 80s. The kilns now will be more reliable and, as a result, will lead to fewer downtime events and minimize continuous repairs," said Danny Wright, Diboll lumber plant manager.

“Our boiler was installed in 1973, and we are very fortunate to have been able to get about 50 good years out of it. With these updates, we will have a more reliable machine with less maintenance issues."

The project will add a third strander to the facility, which will increase the annual output of quality OSB products by approximately 150 million square feet.

"The multi-million-dollar improvement project will be a plus for the local economy,” said Andy Konieczka, president of Georgia-Pacific structural panels. "Approximately 100 contractors are expected during the construction phase. Once the new strander is online, there will be an increase in log trucks arriving and trucks departing with finished goods. The new addition is scheduled to be completed in 2023."

The company announced plans to upgrade parts of its 640-acre Muskogee, Oklahoma, bath tissue, towel, and napkin manufacturing operations in May. The more than $50 million investment over the next three years will improve safety, reliability and efficiency, and will add a new production line and converting equipment.

Announced in May, the Bradford, Pennsylvania, corrugated plant will undergo a significant upgrade with an investment topping $34 million for new equipment to modernize the plant's operations.

The upgrades include a new corrugator, two new converting lines and upgrades to the shipping department, which will help the plant operate more efficiently. Newer converting equipment will improve the plant's throughput and print capability to meet customer needs better.

"We wanted to be responsive to customer needs and provide the best long-term solution for Georgia-Pacific to allow us to grow as a preferred partner with our customers," said Earl Wright, area general manager. "The equipment we selected will meet the needs of our customers across Pennsylvania, eastern Ohio, western/central New York, and eastern New Jersey for many years to come."

The first equipment is expected to be installed in the first quarter of 2023, and the whole project will take 12 to 14 months to complete.

A $500 million expansion began in July at the company’s Broadway mill in Green Bay, Wisconsin. The investments will significantly enhance the company's retail consumer tissue and towel business.

More than 100 jobs will be created to operate the new complex in addition to the mill's 850 current employees. The project will have as many as 500 construction and contract-related workers onsite at the mill throughout the project and is expected to be completed in 2024.

GP Cellulose is investing about $80 million to add fluff capacity at its Alabama River mill near Monroeville, Alabama. The project is being implemented in phases and will increase the mill's ability to produce fluff pulp.

"This investment will enable GP Cellulose to address the increasing fluff pulp needs of our customers worldwide," said Munir Abdallah, GP Cellulose president. "The completion of this project will add capability and flexibility to our system to meet a wider range of needs and position us to grow with our customers."

Significant aspects of the project are complete, including investments in the headbox and forming table. The final phase is now underway and includes infrastructure, winding, and wrapping components. Plans call for the upgraded line to produce fluff pulp by late 2023.

Georgia-Pacific is investing more than $20 million at its plant in Lebanon, Tennessee. Its existing corrugator will be replaced with a new one to give the plant more throughput and provide customers with a better-quality product.

"This new technologically advanced corrugator will give us the ability to supply independent and integrated box and display customers throughout the mid-South with upgraded offerings such as two-sided high-quality print, including Georgia-Pacific's Hummingbird® digital print, on a variety of fluting options for the converted board," said Rob Streeter, Georgia-Pacific's area general manager.

The project will be conducted in phases through 2023 while the existing corrugator continues to operate. The planned startup of the new unit will be in the first half of 2024.

GP completed modernizing one of its premier sawmills in its Pineland, Texas, lumber complex with a $120 million investment.

The modifications included a new sawmill that replaced the existing stud mill built in the 1960s. The new mill will be able to produce 450 million-board-feet of dimensional lumber each year when running at full capacity, compared to the 380 million it previously produced. It should also increase the number of trucks delivering wood from 250 to 300 loads daily.

Georgia-Pacific chose to expand the operation for many reasons, including the area's workforce and natural resources. "With the mill favorably located in the middle of the southern pine forest of east Texas coupled with an experienced workforce that dates back to several generations, Pineland Lumber is well-positioned to prosper for years to come," said Georgia-Pacific lumber president Fritz Mason.

Georgia-Pacific continued to work on its state-of-the-art gypsum wallboard production facility near Sweetwater, Texas. More than $300 million has been invested in the new plant and will be Georgia-Pacific's second gypsum wallboard facility near Sweetwater. The new facility is being built adjacent to GP’s existing gypsum plant. The two operations will supply customers and distribution partners with more than 1 billion square feet of gypsum products each year.

“The demand for our diverse gypsum products continues to be strong, especially in Texas,” said Brent Paugh, president of Georgia-Pacific Gypsum. “By having two production lines in Nolan County, Georgia-Pacific can strengthen its capacity to meet our growing customer needs in Texas’ residential, commercial and industrial construction sectors.”

The company’s Sweetwater West Gypsum plant, located in Texas, also has been upgraded. The plant has completed board-drying equipment enhancements that are anticipated to result in carbon dioxide reduction, energy savings, and the lowering of resource consumption. This investment was approximately $7 million.

The project involves upgrades to the facility’s pulp processing systems that will reduce energy and chemicals consumption, other environmental emissions, and allow for more paper production.

Construction is slated to start next year, with an estimated startup by spring 2024.

In December, Georgia-Pacific broke ground on a state-of-the-art Dixie®  facility in Jackson, Tennessee. The investment is worth more than $425 million and is the largest single investment in the city's history. Once operational, the plant will employ more than 200 people and produce well-known tableware products, including the Dixie® and Dixie Ultra® lines of plates and bowls.

"Although we have invested to expand existing sites, this is the first new Dixie® plant the company has built since 1991," explains Fernando Gonzalez, president of the consumer products Dixie® business at Georgia-Pacific. "This added capacity will help us meet the needs of our customers as consumer demand for high-quality, durable paper plates and bowls continues to grow." 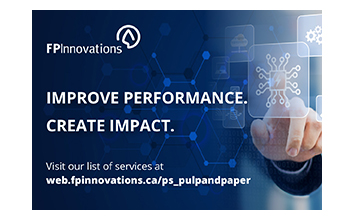 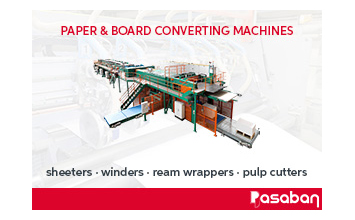 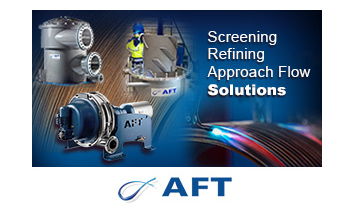