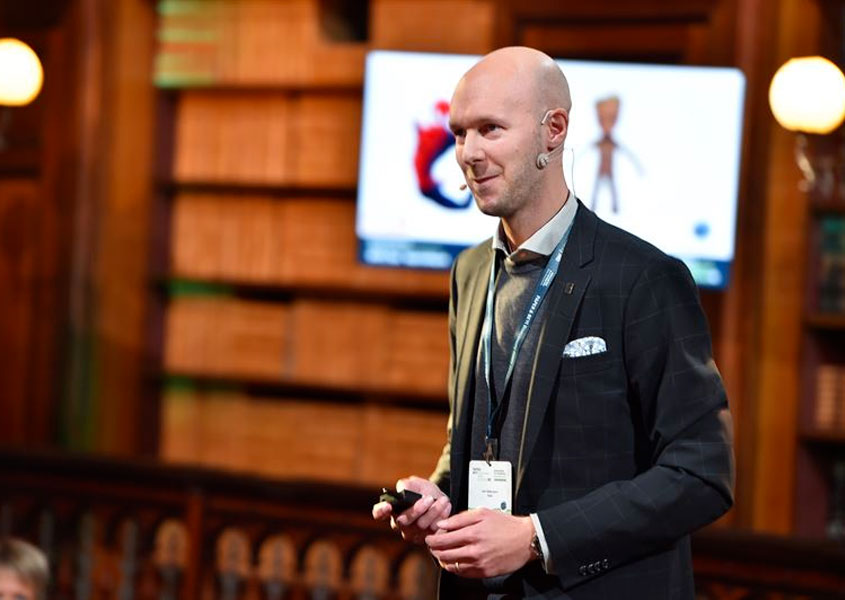 Until today, spider silk has been regarded as the world's strongest biomaterial. Now there is something that is even stronger.

A thin thread of spun nanocellulose that could be used for anything from aircraft wings to artificial tendons in the body. Today, Karl Håkansson, RISE, was awarded the European Award Blue Sky Young Researchers Innovation Award for its pioneering research.

At yesterday's award ceremony in conjunction with the Paper & Beyond 2018 conference in Brussels, three winners were awarded and selected for the global final of the Blue Sky Young Researchers Innovation Award in Canada in 2019. Karl Håkansson from RISE won the jury's appreciation with his presentation of nanotechnology in a macroscopic context.

Karl Håkansson, together with colleagues at RISE and KTH, has developed a new method of spinning nanocellulose into a thin and strong thread. What gives the thread its strength is that the fibrils in the wood fibre are arranged in the same direction. The idea behind the now patented method involves converting a fibre suspension into gel which in a water flow becomes a long thin thread of nanofibrils. Measurements performed at the Petra III synchrotron plant showed that the material, as a matter of fact, is both stronger and more than eight times stiffer than spider silk, which was previously considered to be the strongest biomaterial.

"The results are obviously spectacular, but what's really exciting is that we now have a material with nano properties that can be applied in macro format for the first time," says Karl Håkansson.

Possible applications range from high-performance medical materials that are not rejected by the body into biobased lightweight materials in cars, aircraft, furniture, textiles and construction.

Already the first results from Karl's PhD thesis drew great attention when published in the scientific journal Nature Communications in 2014 and after the latest article in ACS Nano, the media interest has only increased. As late as May this year, this research field was named as "one of the coolest things on earth" by General Electric.

"We have noticed increasing interest in business for use in various applications. Therefore, RISE are now investing with the goal of scaling up the production in a continuous process, says Fredrik Rosén, Marketing Manager RISE Bioeconomy.

Among the finalists were also Samuel Pendergraph from RISE. His presentation gave hope for a bright future for the growing cosmetics industry, which is in urgent need of sustainable alternatives to microplastics.

"In cosmetic products, plastic microspheres are used to exfoliate and scrub skin, hair, teeth, etc. But at the same time, emissions of microplastics lead to environmental problems and several countries are now introducing restrictions on the use of microplastics. Therefore, cellulose is an interesting alternative and thanks to our new process we have managed to produce microspheres with similar smooth properties," says Samuel Pendergraph.