In North America, publicly traded companies such as International Paper, Procter and Gamble, and Verso own the lion’s share of papermaking capacity.

As we can see in the image below, the share owned by public companies is almost two-thirds of the entire capacity of North American pulp and paper.

Interestingly, an analysis from FisherSolve shows that of the 29 new machines built since 2015, an overwhelming majority of them were built by private companies. Since private companies only make up 37% of total North American paper and pulp produced, why might this be, and what are the implications for producers and suppliers? 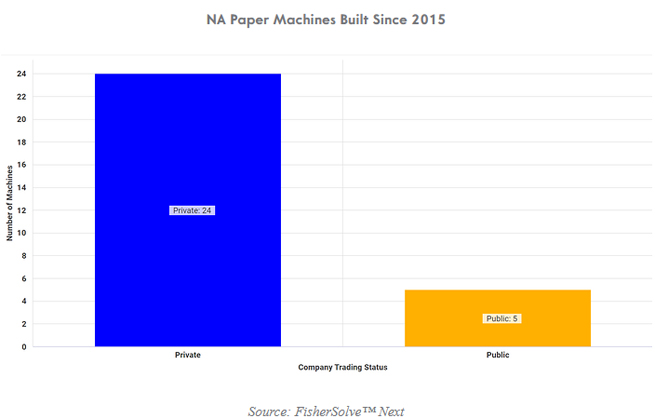 First, understanding the structure, operations, short-term motivations, and long-term directions of these two types of companies is critical in order to fully analyze the data above.

Although a generalization, most short-term private equity owners have a hold horizon of 3-8 years and have an objective of increasing EBITDA (Earnings Before Interest, Taxes, and Depreciation / Amortization) via operational improvements (cost reduction programs) or synergies gained by combining several companies together to form a larger platform company. For example, Brookfield Asset Management dramatically reduced the cost structure of Longview Fiber Company after its acquisition in 2008, before selling it for a hefty profit in 2013 to Kapstone. Similarly, Lindsay Goldbergy has recently expanded its investment in Glatfelter’s legacy paper mills (now called Pixelle) through an acquisition of the Steven’s Point and Androscoggin mills owned by Verso.

On the other hand, while long-term private companies may manage similar profit measures, they tend to make decisions with a longer-term investment horizon in mind, and they change ownership infrequently. They are visionary and study the business to determine, to the best of their ability, the shape of the market and the business years into the future. For example, Kruger has been in the same family for nearly 100 years, Pratt over 30 years, and so on. Consequently, their investments tend to also consider a long-term horizon for ownership and positioning of the business.

Public companies can be defined as those who’s equity trades are in the public markets (some “private” companies can also receive financing through public debt issuances or use of public funds). Typically, management is measured by the performance of the company’s stock prices over time, both to peers, and also in comparison to investment alternatives, through an index like the S&P 500.

While there are many theories regarding stock price movement, investors generally desire high earnings per share (“EPS,” which is where the so-called P/E ratio is derived) and/or the prospect of future growth in earnings. Higher EPS means that the company will have after-tax profits to distribute to shareholders.

In contrast to most private companies, a public company must report their results every quarter to the market and feedback on their decisions is immediate, with a short timeline of usually 2-3 years maximum. And, in our experience, this can greatly impact the level of risk that a public company is willing to take.

Similarly, Senior Managers are well aware of their industry colleagues who have been drummed out due to poor capital decision-making. This usually leads managers at public companies to require higher hurdle rates (IRR) to compensate for this risk, particularly for large capital projects like new paper machines and pulp mills.

If the recent trends hold true, capital equipment suppliers might do well to consider focusing on long-term PE companies and the handful of high-performing public companies.

Of course, there are many implications and questions if this phenomenon continues, for example: