The post-COVID global landscape continues to shift in a number of new directions within the pulp and paper industry – some expected, some unexpected.

The accelerated decline of the printing and writing (P&W) segment, for instance, is no surprise. However, while M&A and consolidation activity can largely be expected during transitional periods, new opportunities are prompting some ambitious moves.

Most recently, British Columbia-based Paper Excellence (PE) announced that it is in the process of acquiring South Carolina-based Domtar. Post-acquisition, Paper Excellence intends to retain the pulp and paper mills operated by the former Catalyst Paper as well as those belonging to Domtar. The all-cash transaction represents an enterprise value of approximately $3.0 billion – a premium price point, to be sure.

This move raises a number of questions for North American companies operating in a few key segments as Paper Excellence expands its mill portfolio.

Paper Excellence is hungry for pulp. Not only is the company a major producer of BSKP in western North America, but its February ‘21 acquisition of Eldorado Brasil Celulose, one of the largest pulp producers in the world, cemented PE as a significant player in global pulp production and trade. Much of this capacity is subsequently shipped offshore to meet strong demand from Asian markets - primarily fueled by affiliated company, Indonesia-based Asia Pulp & Paper (APP).

Prior to the Domtar acquisition, PE’s portfolio mix was dominated by pulp production (70%) and printing and writing (17%), which seems one-dimensional for such a large global player with deep pockets and significant pulp coverage, especially given recent trends in these segments: 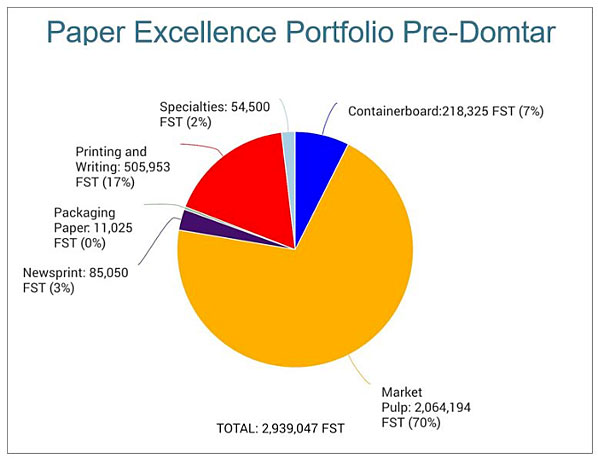 At first glance, PE’s portfolio mix post-Domtar acquisition is a head scratcher. Is the company really looking to double its P&W capacity, or is there more to the story? 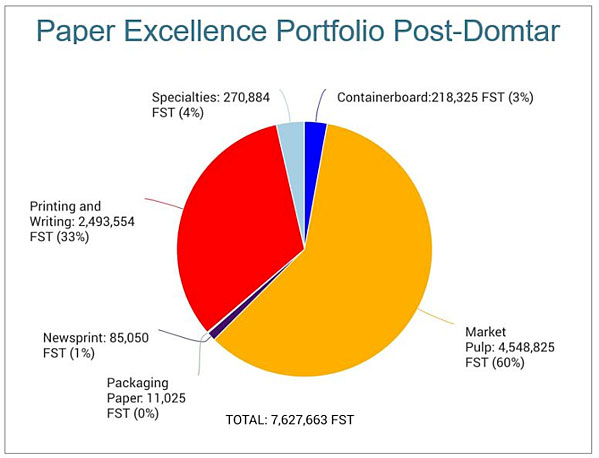 Late last year, Domtar announced an agreement with Voith to convert its Kingsport, TN mill to produce recycled containerboard. The mill’s conversion is expected to be complete in 2022, at which time the facility will produce and market about 600,000 tons of high-quality recycled linerboard and corrugated medium annually. This capacity will make Kingsport the second-largest recycled containerboard mill in North America.

Domtar’s long-term containerboard plans don’t end in Kingsport. Before the PE announcement, Domtar suggested that subsequent mill conversions might be in the company’s future as it seeks to capture market share in the hot containerboard segment. While anything is possible, the PE acquisition likely guarantees these conversions will occur – and conceivably at an accelerated rate, given PE’s access to capital.

With the exception of its pulp assets, I expect PE’s portfolio mix to change markedly over the next few years; we will see its P&W capacity perhaps trimmed by one-third, while its containerboard capacity could increase four or five-fold.

If Domtar’s subsequent containerboard plans do come to fruition, the conversions would drive demand for additional box plants, which may create near-term opportunities for some producers. However, the conversions will have a disruptive effect in the containerboard space, and Domtar could emerge as a top producer over the next few years - providing PE with a significant presence in the NA market.

Questions North American competitors in these segments need to be asking: