It is obvious that Internet has become an integral part of our daily personal and work lives and a fundamental driver of productivity.

However, we take Internet connectivity and LTE networks for granted and often forget that it has not reached some remote areas, notably the forest. Well, until now!

Why do we need Internet in the forest?

Through the Forestry 4.0 program, FPInnovations seeks to provide Internet access to forestry operations and bring to these operations all the benefits that internet connectivity provides. These benefits include better coordination of the supply chain, improve worker safety, facilitate the exchange of data to and from forestry equipment and allow the introduction of advanced technologies such as remote machine operation and automation.

The challenge remained to find a solution allowing for two-way transfer of large volumes of data via mobile communication equipment at an affordable cost. An ideal solution would need to be self-contained and deployable far from any commercial communication infrastructure.

One potential solution was to bring a local cellular LTE network to the forest.

FPInnovations conducted tests in Quebec’s and in British Columbia’s forests.

In B.C., FPInnovations researchers have been working with Richmond-based Star Solutions that specializes in creating private LTE networks where cell coverage is not available. Their Network-in-a-Box (NIB) unit was used to create a private LTE network in the forest, and a satellite based non-terrestrial network was used to connect the local network to the core network via satellite. 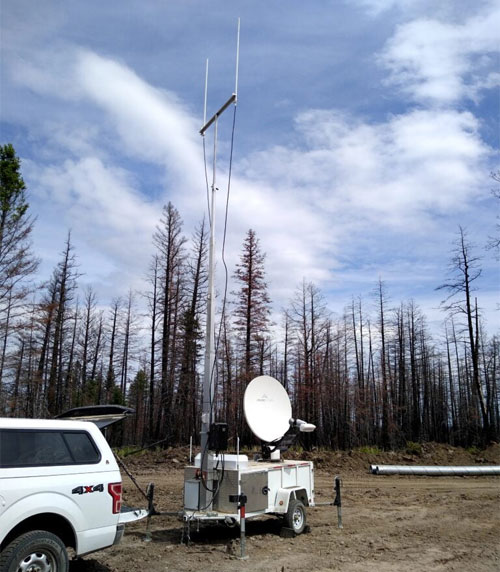 LTE testing took place throughout the summer and fall of 2020. One of the first series of tests was conducted at Tolko’s operations in the Chilcotin area of B.C., an area that does not have any cellular coverage.

The test created a local LTE network capable of making multiple phone calls at once. Data transmission rates were sufficient for video meetings and other types of activities that require high data transmission speeds.

Unfortunately, the coverage was limited due to the low height of the antennas and due to the surrounding forest blocking the signal. It became evident that, to improve coverage, the antenna height needed to increase from 10 m to 30 m.

To test the concept, a crane truck equipped with a man basket was rented and taken to the Malcolm Knapp Research Forest in Maple Ridge to assess how the antenna height impacts coverage. When the antenna was raised up to 30m, the usable signal range was increased to a radius of about 2 km.

A weak signal, that was unusable, was also detected at distances of up to 5 km in radius. To maximize coverage, future tests will need to include technologies such as cell phone boosters that could potentially make this weak signal usable. 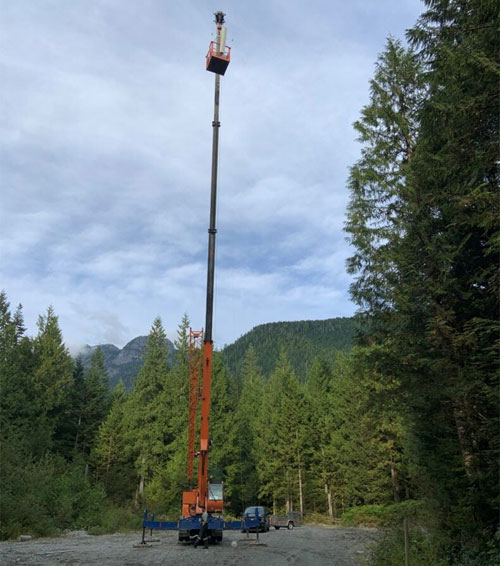 Further testing was conducted at Tolko’s operations in the Kelowna area to verify the effectiveness of using a cell phone booster.

A crane truck was again used to raise the antenna height to 30 m, and coverage was measured with the system deployed at two different locations. This trial included a Cel-Fi cell phone booster, which ended up increasing the coverage to a larger radius of 5 km.

Signal strength measured at 5 km from the antenna was sufficient for data transmission. Tests were done at different antenna heights, and it was found that the higher the antenna was, the better the coverage. 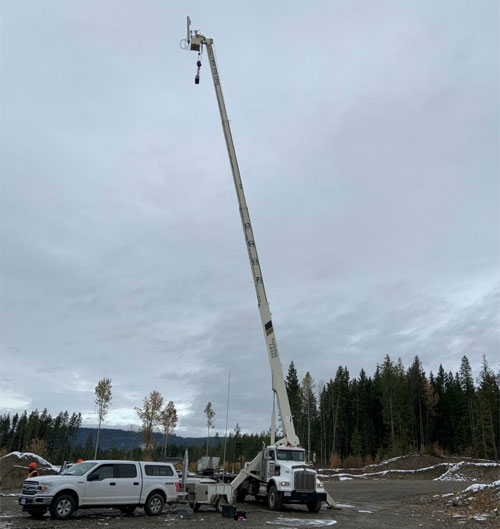 Another in-service, full scale operational trial is planned for this winter at Tolko’s operations in the Williams Lake area.

For this upcoming test, Tolko purchased a 30 m portable cell tower since renting a crane truck is not a viable means to deploy the antenna for longer periods.

A tower mounted signal amplifier will be used to maximize signal strength and range. Harvesting machines will be equipped with cell phone boosters and with FPDat’s telematics. A repeater may be used if needed to provide a signal for the entire cut block.

This trial will bring a fully functional LTE network to the forest with two-way data flow between machines and increasing worker safety by improving communications amongst themselves and the outside world.