Across the boreal forests of Canada, “grey ghosts” have roamed for hundreds of years, elusive creatures that seek out forest landscapes undisturbed by humans.

These “ghosts” – woodland caribou – are not only one of the country’s most iconic animals, but are bellwethers of the forest ecosystems. Healthy populations provide a clear indication that the forests can support biodiversity and foster a traditional way of life for bordering Indigenous communities.

But the woodland caribou is a threatened species whose numbers have plummeted over decades as their habitats have been disturbed. According to Environment Canada, just 15 of 51 caribou ranges are at least 65 per cent undisturbed. This is due in large part to the cumulative impacts of encroaching oil, mining and logging industries that have altered their habitat and increased access for predators.

Fortunately, the plight of this at-risk species is gaining increasing attention. Recently, on Canada’s west coast, governments and First Nations communities signed a landmark agreement to protect 550,000 hectares essential for six caribou herds, designating another 206,000 hectares as a provincial park.

Still, progress is slow and insufficient. In fact, a new report on Quebec’s Val-d’Or woodland caribou population confirms the urgency: only six members of this herd remain alive. Today, across Canada, the call continues for governments and industry to work with environmental groups, First Nations and stakeholders to protect the health and sustainability of caribou.

In 2013 during a routine yearly audit, the forest company discovered that they did not meet requirements related to the protection of caribou habitat set by the Forest Stewardship Council (FSC), based on new information from the federal Recovery Strategy for the Woodland Caribou that highlighted the importance of forest management.

“When we received the report, we didn’t panic as we know FSC is a tough standard and caribou research and knowledge is constantly evolving,” says Marie-Eve Sigouin, forest certification coordinator, RYAM and chair of the working group. “We knew we had to think long-term, beyond one audit, and to see FSC as a way of working collaboratively with others. So we got to work to change our approach.”

As a company deeply invested in nature for its raw materials, RYAM has long understood the importance of forming partnerships with those who live and work in and near the forests in which it operates. The new requirements provided further impetus for change, and guided RYAM’s collaborative approach to its caribou plan.

RYAM sought to build Team Caribou by engaging the Indigenous community at Pikogan (also known as the First Nation of Abitibiwinni), for whom the caribou is an emblematic and historically harvested animal. RYAM also reached out to Canadian Parks and Wilderness Society (known as Société pour la Nature et les Parcs (SNAP Québec in French)), which balances caribou habitat conservation with forest management and restoration, as well as the Quebec Ministry of Forests, Wildlife and Parks.

Team Caribou formed quickly due to a sense of shared purpose, and deepened its collective knowledge by including traditional perspectives from the Grand Council of the Crees (Eeyou Istchee) and scientific insight from the Université du Québec en Abitibi-Témiscamingue and others.

The group’s first success came in 2015 when it quickly pulled together the necessary mosaic of changes needed to meet the new FSC and Federal requirements – but this would not be their only challenge. 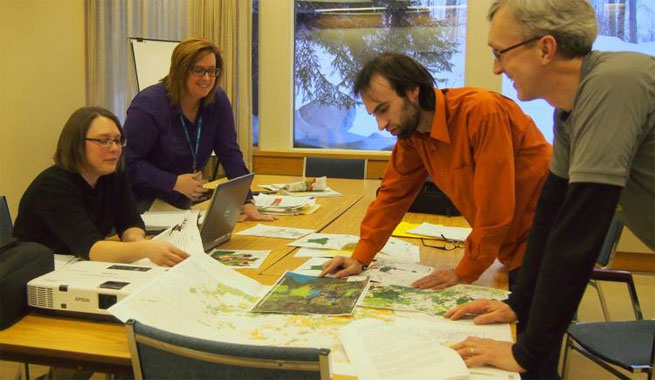 In 2018, as scientific knowledge of caribou continued to evolve, the group came together again, this time with an even greater mission: reduce disturbance levels to less than 35 per cent for the transborder Detour/Kesagami caribou population through habitat conservation and restoration measures.

Determined to succeed, Team Caribou met regularly, negotiated transparently and sought actionable decisions that could be agreed upon in the moment. When negotiations got tough, it was Benoit Croteau, from the Abitibiwinni First Nation, who steered the team back on track by reminding everyone that they were working for the caribou.

In just two years, the team devised and proposed a new plan to protect the caribou habitat while respecting Indigenous Peoples’ rights and balancing the economic interests of industry. Guiding this plan was the new FSC National Forest Management Standard, which requires forest managers to set woodland caribou habitat management strategies based on the best available science and risk tools. This includes minimizing the building of roads, harvesting outside caribou breeding and migration areas, and minimizing landscape disturbances by aligning forestry activities to nearby industrial activities.

“Our first caribou recommendations were implemented by the Quebec government after just two years of work, which is extremely fast,” said Pier-Oliver Boudreault, a conservation biologist at SNAP Quebec. “Within the team, there’s been deep knowledge sharing. I’m a biologist, but I’ve learned a lot about mills and forestry operations. Our Indigenous partners, who are much closer to the land, have brought us the historical perspective [on caribou], which we don’t have in western science.”

This collective new initiative ensured that RYAM was able to meet the new requirements of the 2020 FSC standard. But it also went far beyond that important step: Team Caribou’s approach garnered additional support and funding from the federal government to further develop and share their approach and findings across the border, in Ontario.

“It’s clear that if you develop a plan in absence of a key stakeholder, you’re missing an opportunity,” said Chris McDonell, Chief Forester-Ontario and Manager, Aboriginal and Environmental Relations, RYAM. “Conflict is expensive. Collaboration is faster and cheaper.” 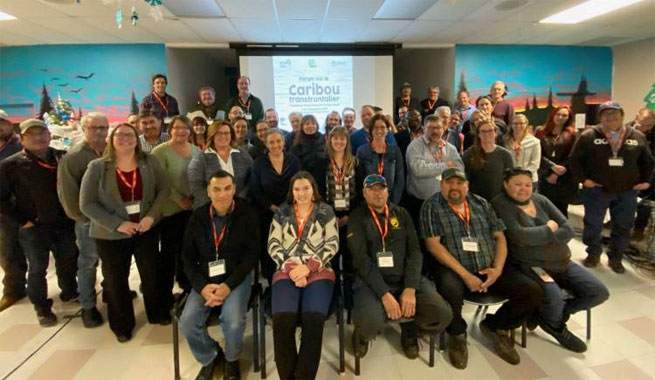 Since 2013, Team Caribou has deepened its connection and commitment to this particular population of woodland caribou. The work culminated in 2019 in a unique event at Pikogan, an Indigenous community seven hours north of Ottawa. There, Marie-Eve Sigouin, along with Benoit Croteau and Pascale Trudeau-Cananasso of Abitibiwinni First Nation, put the finishing touches on the first-ever transborder Detour/Kesagami Caribou Forum.

The event drew participants from Ontario and Québec, as far as 1,000 kilometres away, including Indigenous communities, forestry and mining companies, environmental organizations and government officials – all of whom gained newfound scientific and traditional knowledge about the health and wellbeing of local woodland caribou.

The Forum, supported by Environment and Climate Change Canada, was a clear indication that Team Caribou had earned widespread trust and recognition over the past six years. It was also a timely opportunity to showcase diverse projects for the Detour/Kesagami caribou population, and included a First Nation-led Talking Circle and collaborative workshops.

During one session, Clarence Trapper, Moose Cree, unveiled a revelation that took many in the group by surprise. “When helicopters or planes come too close, the caribou stop eating,” he said.

Woodland caribou, as it turned out, were impacted by human influence in the air, not just on the ground. This opened a new avenue of discussion around the consequences of environmental noise overall, both within and above the boreal forest.

“This forum was about sharing knowledge and perspectives between parties that don’t meet very often,” said Marie-Eve Sigouin. “We created bonds between people that wouldn't otherwise have explored this issue together, further deepening our understanding of the species and its habitat.”

A lasting impact on the region 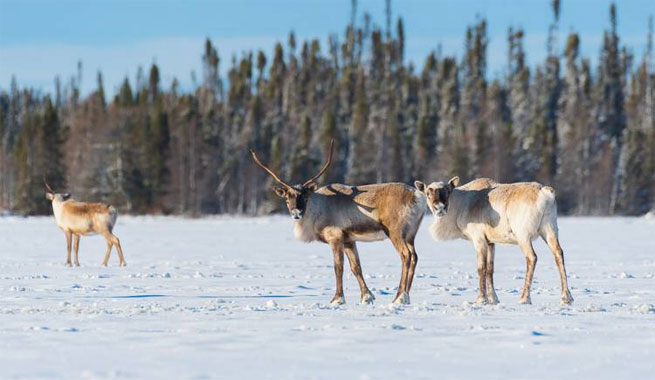 Team Caribou is a shining example of how positive change flows from a committed group that shares a vision, negotiates in good faith, and is given the autonomy to impact change. Its caribou conservation plan will have lasting significance for the region’s forests and biodiversity – and is essential to sustaining what is required by the new Canadian FSC Forest Management standard.

One year after the forum, Team Caribou’s spirit continues to resonate, owing in large part to the leadership and active engagement of the Abitibiwinni First Nation community. The collaboration continues to deploy elements of the conservation plan – most recently, an analysis of potential road closures that would restore caribou habitat in the area.

In the Detour forest range, there exists now a blueprint for others to follow, so all Canadian caribou herds can be better supported by those who are stewards of the land. 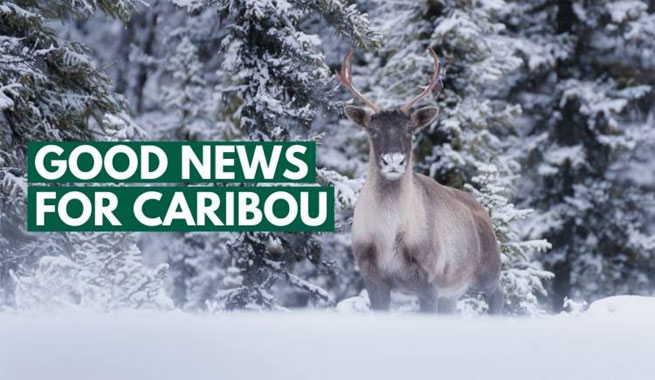