Corrugated cardboard packaging is an important part of our daily lives, accounting for nearly 40% of the entire cellulosic fiber-based packaging sector. Although this type of cardboard is first and foremost associated with moving and transporting heavy goods, it is now possible to create light and functional packaging structures that greatly extend its field of application.

Corrugated cardboard is minimally composed of three distinct layers of cardboard and gets its name from the corrugations in the inner layer. The flute is produced by passing this inner cardboard layer through a nip formed by two grooved rollers, assembled to form a gear. These rollers are heated and create a permanent corrugation. Subsequently, the outer layers of cardboard (the liners) are joined to the flute with starch-based adhesives. More complex structures can also be designed by adding layers of fluting separated by linerboard. The corrugations, commonly called flutes, are characterized by their amplitude (height) and wavelength. They are identified by letters in Table 1. The A, B and C flutes are widely used for strong boxes to contain a considerable amount of mass, while the E, F and N microflutes are used for elegant packaging as well as for the enhancement of the product through quality printing on its surfaces. Microflutes can be found in a wide range of packaging applications, from cosmetics to fast food serving!

Structural use of corrugated boards

Fluted board plays multiple roles. First of all, it protects packaged products from shocks due to the potential compression of the flutes. This property is measured by the traditional Concora CMT (Corrugating Medium Test) which consists in measuring the flat crushing force of the fluted papers. But above all, the fluting paperboard, properly integrated in the structure of the boxes, allows to increase the rigidity as well as the stacking resistance of the boxes. Indeed, material physics shows us that the bending strength of structures depends mainly on the elastic modulus of the external elements and, as well as their distance from the center of bending, in other words on the thickness of the structure. One of the main roles of the fluted board is therefore to provide support and uniform separation of the cover boards in order to increase the rigidity of the box. The axis of the flutes being perpendicular to the machine direction of the boxes (Fig. 1), it is therefore the lower and upper parts of the box that benefit from this increased rigidity. The stacking strength arise from the cross-direction orientation of the vertical sides. The fluted medium then combines with the liner to withstand the load in the cross direction, as typically measured from the Edge Crush Test (ECT).

Representation of the basic unit of a corrugated board.
The flute is inserted between two linerboards.

Microflutes (E-, F- and N-type) represent about 10% of the corrugated board market, a figure that is expected to increase over the years. Microflute boards are lightweight, strong and offer excellent print quality due to the small spacing between the flutes. They are mainly found in packaging for relatively light products (shoes, tableware, small appliances, etc.), but for which the visual appeal of the packaging is very important. Similarly, rigid structures based on micro flutes allow the creation of displays commonly used in grocery stores, drugstores or hardware stores. Microflutes can even be found in food packaging, such as the disposable hamburger containers of some fast-food chains!

The current trend in microflute, as well as in the entire corrugated industry, is to reduce the basis weight. The microfluted medium is now often lower than 100 g/m2 (20 lb/1000 ft2) rather than the typical value of 112 g/m2 (23 lb/1000 ft2). Such low basis weights obviously require improvements in corrugator operation as well as new testing methods. For example, the Short Span Compression Test (SCT, also called STFI test) becomes very important, while the Concora Corrugating Medium Test (CMT) becomes extremely difficult to perform at weights below 100 g/m2.

Over the past year, online business has grown by leaps and bounds, and this trend does not seem to be abating. It is more relevant than ever to develop stronger and lighter packaging. With its team, Innofibre is actively participating in the development of these new grades of cardboard to meet the needs of the industry.

"Contribute to the technological positioning and sustainable development of the paper and biorefining industry, by supporting the innovation and diversification of products derived from biomass and by adapting papermaking technologies." 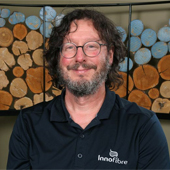