In addition to present heavy investment in the Swedish paper and pulp industry, new start-up companies are bubbling with different ideas regarding opportunities for new products and applications based on forest raw materials and industrial side streams.

Given that trees contain a range of interesting molecules, there are start-up companies in several areas that depend on the raw material itself as well as products produced from it. In this blog post, four out of a large number of Swedish start-ups are briefly presented, aiming to contribute in various ways to a green transition based on renewable forest raw materials.

CelluXtreme is a research company with a patented technology for spinning filaments from nanocellulose. It differs from existing techniques for "man-made fibres" and pilot scale work is now going on to verify the technology in order to be able to commercialize it.

"Our spinning technology is not similar to viscose processes with coagulation baths, it is based on the 'Flow focusing' technology," says Anna Wiberg, CEO of CelluXtreme. "With our process, we can "line up" and orient the nanocellulose fibrils in the longitudinal direction. The process is water-based with mild chemistry, which is important for the process to be sustainable."

A jet of nanocellulose is accelerated by two jets perpendicular to it. The fibrils of nanocellulose are under the influence of the two side jets oriented in the longitudinal direction, just like the fibres from a paper machine’s headbox. The system forms a gel of the salt from the side jets which, after drying, becomes super-strong filaments with a diameter of 5-10 µm.

The filaments have exciting properties such as high strength and stiffness and at the same time low weight and are therefore an interesting reinforcing fibre for lightweight composites. In addition, they are stretchable and flexible in a completely different way compared to carbon fibre and fibreglass. Functional components can be inserted together with the nanocellulose in the spinning process to, for example, obtain filaments that support cell growth, or have conductive properties. The next development step is to have a line that enables prototype development and process design.

Graphene from lignin instead of graphite

Bright Day Graphene, BDG, started in 2018 and has developed a patent-pending method for the production of graphene from lignin. The patent-applied process takes place in two stages; carbonization with heat and separation. The product is graphene with the by-products being graphene oxide and carbon black. 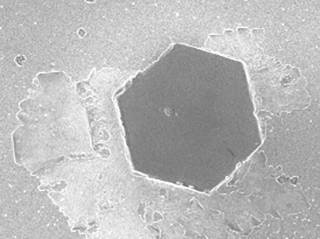 "The graphene flakes are 30 µm in diameter but can be up to 100 µm, while graphene made from graphite is often under 10 µm," says Anna Carlsson, co-founder of BDG. "Since large graphene flakes provide better conductivity, we invest in applications that utilize the electrical properties. The graphite-based graphene on the market is mostly used for mixing with other materials. Our niche is electrical applications such as energy storage, electronics and sensors.”

BDG has a collaborative project with Klabin in Brazil, which has a LignoBoost plant. In the project, their lignin is used and converted into graphene for use in sensors that can be used in smart packaging.

So far, much focus has been on the process development itself, and the next step in scaling up will be an industrial pilot with an annual capacity of one tonne. As soon as the process is verified, the planning of a full-scale factory, in the order of 80-100 tonnes annually of graphene, will begin. BDG has a clear scale-up plan and the planning for the next step begins as soon as the pilot is underway and construction should be completed about two years later. The interesting thing about the process is that the graphene gives a very high processing value compared to other lignin-based applications.

In just a few years, Biosorbe has gone from barely a kilogram of its absorbent product GreenAll to a full-scale facility at Rottneros pulp mill area in Sweden.

Professor Monica Ek at KTH in Stockholm had been working on development of material for antibacterial diapers, a material that turned out to be hydrophobic. Biosorbe became interested and together with financiers started the development of a full-scale process. After the financial issues were resolved, planning for the pilot plant at Rottneros pulp mill began in the autumn of 2020.

"There is tremendous expertise in pulp and cellulose at Rottneros and we use their TMP and CTMP as raw material in our process," says Lars-Erik Sjögren, CEO of Biosorbe. "We make use of their treatment plant, available electricity supply and excess energy from the pulp mill to dry the product. The plant was inaugurated in October 2021 and production of GreenAll is now underway.”

It is a batch process where the pulp is mixed with the chemicals in a pulper. The product is then washed and the water squeezed out before the pulp is fluffed up and dried with excess heat from Rottneros pulp mill. The capacity in the first stage is 500 tonnes of absorbent product per year. 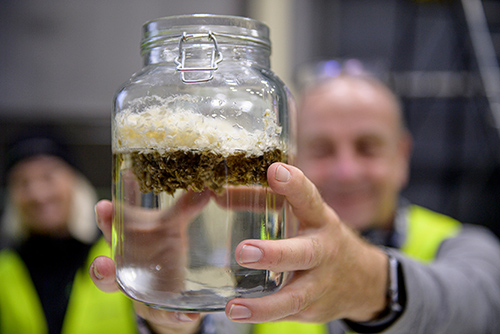 The first product is an absorbent that is hydrophobic and lipophilic and can absorb 10-14 times its own weight. Competing products are based on cotton, cement or fossil plastic material. They either release a lot of CO2 during production, are energy-intensive or, as in the case of cotton, use a lot of water during production.

The initial application is for the collection of oil spills, but since the product separates water from oil, it can also be used to clean oil-contaminated water, for example on building and construction sites as well as in new mining tunnels. When the oil has been absorbed, you can either get energy by burning the material or add microbes that "eat" the oil. Future applications may also be in filtering.

Cellfion is the result of a collaboration and several development projects between Linköping University, RISE and KTH and develops ion-selective membranes of nanocellulose. Recently, the company took in approx. 14 MSEK which enables continued process and product development.

"The functionality of the membranes is based on incredibly small and correctly modified pores and can be made anion or cation active," says Johan Erlandsson, Head of Research at Cellfion. "We are looking at different groups and combinations of these that can be attached to the surface to influence the selectivity and thus also for which application the membrane is suitable. With the knowledge we possess, membranes can be tailored by modification to function in many ion conducting systems. The ability to tailor membranes for specific systems makes us stand out compared to commercially available, often PFAS-based, membranes.” 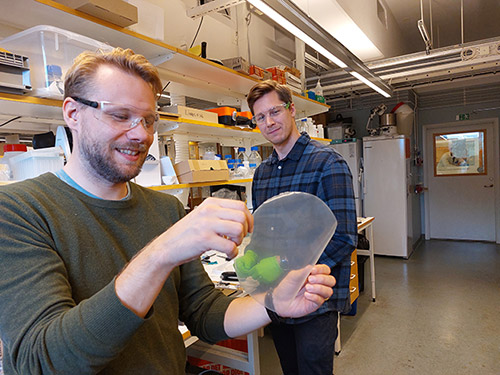 In flow batteries, electrical energy is stored in the form of dissolved substances in liquids that are pumped through an electrode-equipped cell where they undergo oxidation and reduction reactions until they are discharged or recharged. The selective membrane is absolutely crucial for the battery's performance as it must selectively separate the redox-active materials of the two liquids while transporting selected ions. Since the amount of liquid can be dimensioned completely independently of the size of the cell, the effect and capacity of flow batteries can be adapted to the need. Larger liquid tanks mean an increased capacity, while more or larger cells mean an increased power.

A potential major application for flow batteries is in connection with renewable energy production. The battery is recharged when wind or sun produces a surplus of electricity and then uses it when there is a deficit. Flow batteries can be used for short to medium-term energy supply and for grid balancing, which is becoming increasingly important with increasing investment in solar and wind power. There is a huge desire for energy storage so we are talking many millions of square meters of membrane that will be in flow batteries.

This was only a small selection among many start-ups run by entrepreneurs and researchers motivated by different ways of developing new products that all rest on a renewable basis, increase the value of the different parts of the tree, take the forest industry into new markets and become part of the green transition. During the next year I will return to this topic, but until then I wish all readers a very Merry Christmas and a Happy New Year.